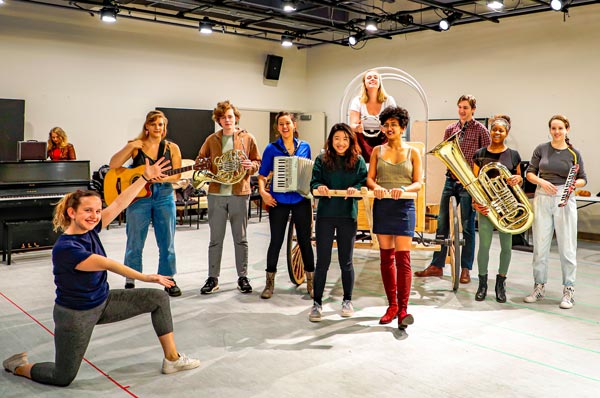 (PRINCETON, NJ) -- The Lewis Center for the Arts’ Programs in Theater and Music Theater at Princeton University will present Mother Courage and Her Children by Bertolt Brecht in an adaptation by Tony Kushner. The play tells the story of a family, trapped by socio-political constraints, trying to survive the impossibility of war in this boisterous comedy filled with original songs. The production features senior Abby Spare in the title role, senior Jaclyn Hovsmith in several roles and serving as dramaturg, and is directed by Princeton Professor R.N. Sandberg, with original music by Vince Di Mura, and performed by Princeton students. Performances are on November 15, 16, 21, 22 and 23 at 8:00pm in the Berlind Theatre at McCarter Theatre Center, 91 University Place, Princeton, NJ.

Brecht wrote Mother Courage and Her Children in 1939 while in exile in response to Hitler’s invasion of Poland by the German armies. The play is one of nine that the German dramatist wrote in resistance to the rise of Fascism and Nazism. The story takes place during the Thirty Years War of 1618-1648 which involved most of Europe. It follows the fortunes of Anna Fierling, nicknamed Mother Courage, a wily canteen woman with the Swedish Army, who is determined to make her living from the war selling wares from a cart. Over the course of the play, she loses all three of her children, “Swiss Cheese,” Eilif, and Kattrin, to the very war from which she tried to profit.

This adaptation of the play by Tony Kushner was written in 2006 for The Public Theater/New York Shakespeare Festival production in Central Park starring Meryl Streep as Mother Courage and costarring Kevin Kline and Austin Pendleton.

Spare proposed performing the lead role in Mother Courage and Her Children as her senior thesis in the Program in Theater because she felt it would be “a terrifying challenge.” Mother Courage is considered among the daunting female roles in the Western theater canon. Spare first encountered the work of Brecht in spring of her sophomore year in Sandberg’s course “Advanced Studies in Acting: Scene Study and Style.”

Spare, who is from outside Boston and is majoring in English and pursuing certificates (similar to a minor) in theater, music theater, and European cultural studies, has been involved in theater since the age of five. She worked professionally as an actor between the ages of 9 and 14 performing in musicals and plays in Boston and New York City and in a national tour of the musical Annie. She was interested in attending a university where she could pursue academics and professional theater training and found Princeton offered the greatest opportunity to do both. She has appeared in a number of Program in Theater productions over the past four years including The Three Sisters, Hairspray, Into the Woods, a new play by Migdalia Cruz, Fun Home, Phèdre, and in workshop productions of two new musicals, including Mad Dreams, written and directed by Sandberg. She has also performed with Princeton’s legendary Triangle Club and the student theater groups Theater Intime and Princeton University Players, serving on the boards of both. She is also involved in the new student group Playwrights Guild which Sandberg notes is becoming an important entity in the theater ecosystem at Princeton, having produced seven new play readings and workshops. After graduation Spare plans to resume her professional career in theater.

Hovsmith, who is from Woodside, California, has also been involved in theater since childhood having performed in her first musical while in kindergarten and participating in shows through her church and while in high school. Upon entering Princeton, she joined the ROTC and expected that she would need to abandon her work in theater. Hovsmith noted that while an undergraduate at Princeton, her mother was a member of The Triangle Club, and, missing her mother as a first-year student, Hovsmith decided to audition for Triangle as a way to make a connection to her mother. She has since also performed with Theater Intime and Princeton University Players, where she has also been a board member. Mother Courage and her Children is her first production with the Lewis Center. While no longer a member of ROTC, ironically, her main role in the production is as a solder. Hovsmith’s major in German led her to join Spare in co-proposing a production of Mother Courage. In addition to performing in the show, she is serving as dramaturg,  providing further research on the show, examining the translation of the script as a German speaker, and sharing historical context with the cast.

Sandberg, having staged many classic theater works, joined the project as director in order to explore Brecht’s ideas of epic theatre in what many consider his masterwork. Though Brecht, rephrasing Clausewitz’s famous statement, said the play illustrated that war is the continuation of business by other means, it is actually more complex, notes Sandberg, detailing the impossible struggle between family and survival for regular people in a time of war. While the play is set in the 17th century, the team is not doggedly striving for historical accuracy in the production design. This is in keeping with Brecht’s philosophy to make the familiar strange and the strange familiar, and his tendency to write about his own time by setting his plays in worlds seemingly distant from his own.

Sandberg teaches in both the Theater Program and English Department at Princeton and is a professional theater director and playwright. A workshop performance of his new musical Mad Dreams was presented by the Lewis Center last fall. He has directed a number of recent Lewis Center productions including Machinal, Cloud 9, Madman Robertson, Uncle Vanya, and How I Learned to Drive, as well as Princeton Summer Theater productions of Pygmalion and The Heidi Chronicles. His plays have been seen in Australia, Canada, England, Japan, Panama, and South Korea, as well as at theaters throughout the U.S. He has been commissioned by, among others, George Street Playhouse, McCarter Theatre, Idaho Shakespeare Festival, Seattle Children’s Theatre, and Merrimack Rep. Sandberg is a Princeton alumnus and in 2014 received the University’s President's Distinguished Teaching Award.

Brecht’s script provides the lyrics for a number of songs that lift the audience temporarily out of the action of the play in an attempt to prompt them to think about the dilemmas the play presents. Lewis Center’s Resident Composer and Music Director Vince Di Mura has written a complex, provocative score for the production. Rather than a standard pit orchestra, the music is played as well as sung by the actors.

Di Mura, who is also music director for the production, is a composer, arranger, jazz pianist and musical director, appearing on concert stages and theaters throughout North America, Canada, Europe and Latin America. He has conducted seasons at theaters through the U.S. Best known for his arrangements of "My Way: A Tribute to the Music of Frank Sinatra," “Simply Simone” and “I Left My Heart: A Tribute to the Music of Tony Bennett,” he has musical directed productions of these shows at a number of theaters. He has been commissioned for original compositions and arrangements by many regional professional theater and university theater and dance programs. Di Mura is the author and curator of “A Conversation with The Blues,” a 14-part web instructional series on improvisation through the Blues. He has received composition and jazz fellowships from the William Goldman Foundation, Temple University, Meet the Composer, CEPAC, the Union County Foundation, the New Jersey State Council on the Arts, the Puffin Cultural Forum and the Mid-Atlantic Arts Foundation. He has 6 CDs on the market, including "Imperfect Balance" (2000), "A Darker Shade of Romance" (2007), the “For Lost Words” (2008) and “Love Was” (2012) in collaboration with Pulitzer Prize-winning poet Yusef Komunyakaa, "California Sage" (2010), and his most recent release, “Meditations on the Sacred Heart.”

The Berlind Theatre at McCarter Theatre Center is an accessible venue with details available online.  Assistive listening devices are available upon request when attending a performance. Patrons in need of other access accommodations are invited to contact the Lewis Center at 609-258-5262 or LewisCtr-Comm@princeton.edu for assistance at least two weeks prior to the selected performance.

Tickets are $12 in advance of show dates, $10 for students; $17 purchased the day of performances, and are available through McCarter Theatre box office or at mccarter.org or by calling 609-258-2787.

To learn more about this event, the Programs in Theater and Music Theater, and the over 100 performances, exhibitions, readings, screenings, concerts, and lectures presented each year at the Lewis Center, most of them free, visit arts.princeton.edu.

PHOTO: The cast of Mother Courage and Her Children in rehearsal. Photo credit: Hope VanCleaf.