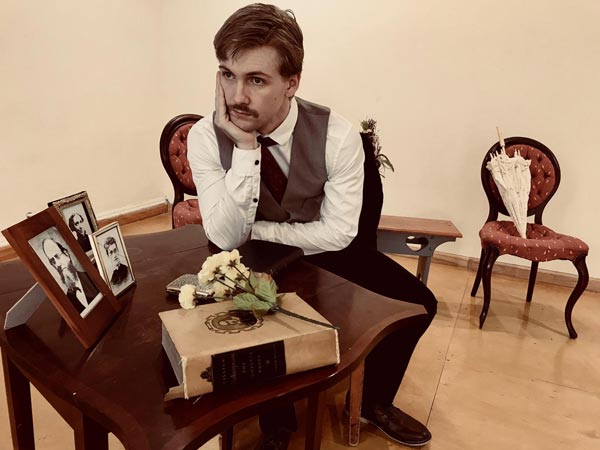 (ASBURY PARK, NJ) -- As a teenager and young adult, Stephen Crane made his home at what was then known as Arbutus Cottage — attending the original Asbury Park High School; covering the waterfront by bicycle or pony as he reported for his brother's news service; composing his first attempts at short stories and poems. On the weekend of November 16 and 17, the famed author of "The Red Badge of Courage" returns to the house at 508 Fourth Avenue, for an up-close and intimate "Evening With Stephen Crane."

Set in 1899 during the last months of Crane's life, the solo theatrical piece by Kentucky-based playwright Phil Paradis finds the novelist, poet, and journalist entertaining some of his fellow American expatriates at his residence in the English countryside — an interlude during which the ailing young writer regales his audience with tales of shipwrecks, Teddy Roosevelt, foreign battlefields, and other personal experiences from a too-brief (but quite eventful) life. A presentation of the Fall Theater Series at the historic Stephen Crane House, the production by Fort Thomas, KY's Artists & Playwrights collective is being seen in New Jersey for the first time, with professional actor Ryan Hunt making his debut in the role of the self-proclaimed "True Jerseyman," under the direction of Janice Orlandi.

First presented by Cincinnati LAB Theatre and Falcom Theatre at Newport, KY in 2016, "Evening with Stephen Crane" was showcased at Manhattan Repertory Theatre in August of 2018. The one man show represents the first of two Crane-themed plays from the nationally produced dramatist whose award winning "Footprints of the Polar Bear and Other Eco-centric Plays" is currently playing at NYC's American Theatre of Actors through November 24.

Performances of "Evening with Stephen Crane" will take place on Saturday, November 16 at 3:00pm and 7:00pm, and on Sunday, November 17 at 3:00pm. Doors open 30 minutes prior to each showtime, with complimentary refreshments served and general admission seating available for all shows. A suggested donation of $10 will be taken at the door, or tickets can be reserved in advance online.