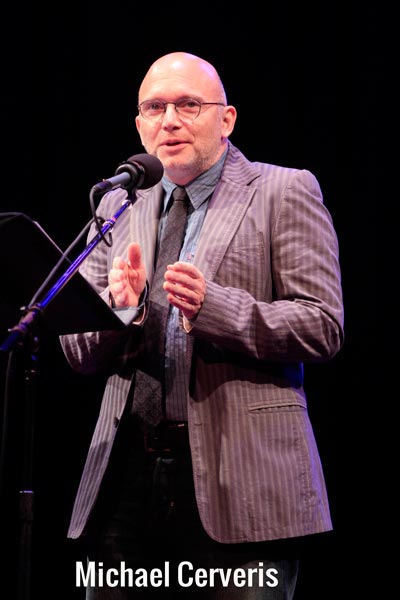 (UNION, NJ) -- NPR’s hit public radio series Selected Shorts is coming to Kean Stage’s Enlow Recital Hall on Saturday, November 16 at 7:30pm.  This will be an evening of festive stories filled with love, laughter and nostalgia. The stories will be read by actors Michael Cerveris, Dana Ivey, and Richard Masur.

Selected Shorts was conceived with a simple premise: take great stories by well-known and emerging fiction writers and have them performed by prominent actors of stage, screen and television who bring these short stories to life. Each Selected Shorts is a unique night of literature in performance.

Michael Cerveris is a two-time Tony Award winner for Fun Home and for his portrayal of John Wilkes Booth in Assassins. He starred on Broadway in Evita, Sweeney Todd, Titanic, and Tommy and Off-Broadway in Hedwig and the Angry Inch. Playbill called him, “arguably the most versatile leading man on Broadway.” His television credits include The Good Wife, Fringe, Gotham, and Madam Secretary, and he was seen in the films Ant Man and the Wasp and The Mexican.

Dana Ivey has been nominated for five Tony Awards, including twice in 1984 for Sunday in the Park with George and a revival of George Bernard Shaw’s Heartbreak House. Her other Broadway credits include Present Laughter, The Last Night of Ballyhoo, and The Importance of Being Earnest. Ivey has been featured in many films including The Color Purple, Dirty Rotten Scoundrels, Postcards from the Edge, and The Help. Her television credits include Boardwalk Empire, Sex and the City, Monk, and Frasier.

Richard Masur’s acting credits date back to the 1970s. His film appearances include Risky Business and My Girl and he was a regular on the television shows One Day at a Time, Rhoda, and Hot l Baltimore. He was most recently seen on Younger, Orange is the New Black, and Transparent. His Broadway credits include The Changing Room, Democracy, and Lucky Guy. Masur is a former president of the Screen Actors Guild.

New York’s Symphony Space has presented Selected Shorts before a live audience since 1985. It is broadcast on more than 150 radio stations across the country and consistently ranks as one of the most popular podcasts on iTunes.

Enlow Recital Hall is located at 215 North Ave., Hillside, on Kean University’s east campus. Tickets are $35-$55 and can be purchased at the Kean Stage Box Office in Wilkins Theatre at Kean University, 1000 Morris Avenue, Union, NJ, by phone at 908-737-7469 or online at www.keanstage.com.

Actors are subject to change.