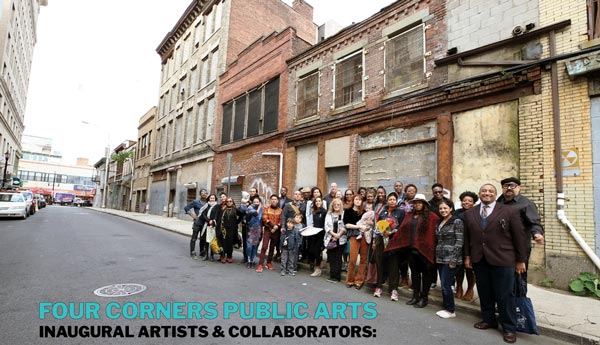 (NEWARK, NJ) -- A public-private partnership between local property owners RBH Group and Paramount Assets, along with the City via the Newark Community Economic Development Corporation (NCEDC), the Newark Downtown District (NDD) and Newark Arts have developed a collaborative effort called Four Corners Public Arts, which will advocate for impact-driven, public art initiatives in and surrounding Broad St. and Market St. in Newark, New Jersey. In a first phase, the initiative will bring to life over twenty facades and the inaugural phase will commence in Downtown Newark in just under two weeks!

The partnership evolved out of a common interest to renew blighted areas through the arts, with the goal of cultivating creative communal space for everyone. The initiative will also help mitigate the growing pains associated with development in progress, or construction zones. This alliance feels strongly that, in a time where Newark is changing, part of their work must include creating opportunities to strengthen the local creative community.

Participating artists are responding to site-specific historic themes. They are retelling stories with intention and integrity, and bringing to the forefront under-acknowledged moments and leaders of our communities. “This is an opportunity to share stories from voices embedded in Newark, to capture them and create permanent space for them. It is so important that public art is used not just as a catalyst in developing cities, but as a tool for representation,” says Jampol. Many of the themes featured in this phase speak to ideas of representation. They are centered around legacy, visibility, and agency.

"I think there is a power in seeing people from the past. We feel their imprint in our everyday lives, in our culture, our language, and community but rarely do we see their faces. In older American cities like Newark, people of African descent are rarely depicted in the 19th century,” says Noelle Lorraine Williams, a local historian and contributing artist, whose mural will speak to Newark’s connection to film and photography, highlighting Black women who were photographed in studios near the mural site. “It is significant that Black women were able to engage this culture, visiting photographers like J.H. Smith and J. Renee Smith, and were photographed with dignity, beauty and strength. This transforms the way we think about African Americans, Newark and history."

Other contributors pay homage to and highlight the indigenous peoples of Newark; ideas and narratives about migration; freedom and future of Brown and Black families; leaders and builders of the local art scene; and Newark’s legacy of community strength during moments of crisis.

The program is made possible by a generous sponsorship from The Sherwin Williams Company. The Sherwin Williams Company prioritizes initiatives such as this and has dedicated themselves to the Newark community, fueling initiatives such as the 2016 Gateways to Newark mural project. They have donated over 175 gallons of paint to the first phase, as well as product and support. Additional sponsors include Wilber’s Painting (Maplewood, NJ), Jerry’s Artist Outlet (West Orange, NJ), Hanini Group (Newark, NJ) and many local restaurants and organizations that have pledged meals and support for the artists at work.