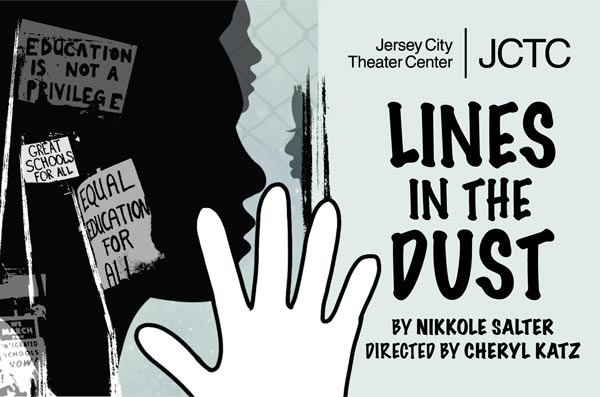 (JERSEY CITY, NJ) -- Lines in the Dust, the Main Stage Projection of the 2019 fall season of Jersey City Theater Center (JCTC), is a New Jersey Story depicting the volatile mix of race, class and inequality in public education. A JCTC production and part of the nonprofit arts organization’s Stories of Greenville program, Lines in the Dust is being presented in a 13 show run, with 10 shows (10/18-11/3) at Merseles Studios, 339 Newark Avenue, Jersey City and three shows (11/7 – 11/9) at New Jersey City University’s West Side Theatre, 285 West Side Ave Jersey City.

Lines in the Dust, by Obie-Award winning actress & Pulitzer Prize nominated writer, Nikkole Salter, tells the story of the lengths a mother will go through to ensure a better future for her daughter. Set in 2010, Lines in the Dust explores the issue of separate and unequal schooling. The story follows a mother and Newark resident seeking to send her daughter to a better school in Millburn, which seems a risk worth taking, but may end up requiring a bigger sacrifice than she ever could have imagined.

Lines in the Dust is a contemporary fable about the injustices of a public school system where the quality of your children’s education can depend on solely on your street address. Originally commissioned by Luna Stage in West Orange to commemorate the 60th anniversary of Brown Versus Board of Education, the plays reveals the persistent racial and economic inequities defining public education in 21st century America.

Although fictional, Lines in the Dust is based on true events and real lives. The play’s ‘context issue’ may be school residency fraud, but the heart of its story are people struggling to maintain a sense of value in an amoral, hierarchal societal system where access to quality education often determines who has power.

If anything, the issue of educational disparity has only gotten more dire since Lines in the Dust premiered in 2014. Budget cuts, overcrowded classrooms and understaffing afflict schools across the county, especially with populations made up of working class and multiracial families. In Jersey City alone, more than 200 public school teachers were fired last May.

“I saw this play when it first opened and was so impressed with how intelligently written it is,” said Olga Levina, Artistic Director, JCTC.  “With all the problems with Jersey City schools, especially in neighborhoods like Greenville and Westside, the time is right to bring this new production of Lines in the Dust to Jersey City. What is happening with public education is just another form of segregation. Our children are our future, and how we educate all our children will determine what that future will be.”

Lines in the Dust was commissioned by and received its world premiere at Luna Stage, then was followed by subsequent productions at the Cleveland Public Theatre, ETA Creative Arts in Chicago, the St. Louis Black Repertory Theatre, Tennessee Women's Theatre Project in Nashville and the Black Theatre Troupe, Phoenix, Ariz.

The JCTC production is the first New Jersey production of the play since its initial run in 2014. In addition to a revised script, the new version features a new set design, as well as multimedia components, including video-mapping projections.

"I'm excited to share Lines in the Dust with Jersey City,” said Salter. “While the play takes place in Essex County, after seven productions across the country, I find that the story's dynamics resonate beyond the specificity of any town or region. I'm grateful my play is being produced at Jersey City Theater Center, and I hope the play and the production contribute to the important conversations about public education happening this ballot season in Jersey City."

The JCTC production is also the first time Lines is the Dust is being staged in New Jersey since its Luna Stage premier in 2014. The director of the show is Cheryl Katz, a New Jersey-based theater professional, who is currently the co-director of The New Jersey Play Lab and was Artistic Director of Luna Stage when Lines in the Dust was commissioned. “I am thrilled with the success the play has had since its World Premiere, and even more gratified to have a hand in bringing this important and timely play back home to New Jersey, " said Katz.