"I Didn’t Want It to End!" Chasing Rainbows: The Road to Oz at Paper Mill Playhouse
NEWS | FEATURES | PREVIEWS | EVENTS
By Spotlight Central 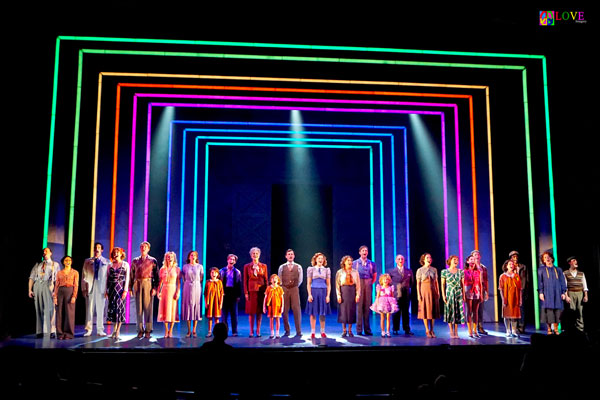 It’s the 80th anniversary of the release of one of the world’s most beloved films, The Wizard of Oz.

And it’s also a year in a which a major motion picture about Garland’s life — Judy, starring Rene Zellweger — recently made its premiere in movie theaters nationwide.

As such, it’s not surprising the air is filled with excitement outside Millburn, NJ’s Paper Mill Playhouse this Sunday, October 6, 2019, as theater-lovers prepare for an opening night performance of a new live musical, Chasing Rainbows: The Road to Oz.

Conceived by Tina Marie Casamento, written by Marc Acito, and directed/choreographed by Denis Jones, Chasing Rainbows is currently on stage at the Paper Mill Playhouse from now until October 27, 2019. The musical chronicles the career of vaudeville trouper, Frances Gumm, who — despite hardship and adversity — elevates herself from vaudeville baby to matinee idol Judy Garland.

As patrons make their way into the stunning Paper Mill Playhouse theater, we see a number of celebrities who are here for the evening’s opening night festivities including Judy Garland’s daughter, actress/singer Lorna Luft.

We also see Broadway and film composer Alan Menken who created the scores to such legendary shows as Little Shop of Horrors, The Little Mermaid, and Beauty and the Beast.

Before the show begins, we take a moment to chat with singer/pianist Michael Feinstein who declares, “I’m excited to be here — I’m really looking forward to this show!”

We also chat with one of Chasing Rainbows’ youngest stars, 11-year-old Sophie Knapp, who plays the role of Baby Gumm — the young Judy Garland.

Exclaims Sophie, “I love being in this show — it’s amazing!” 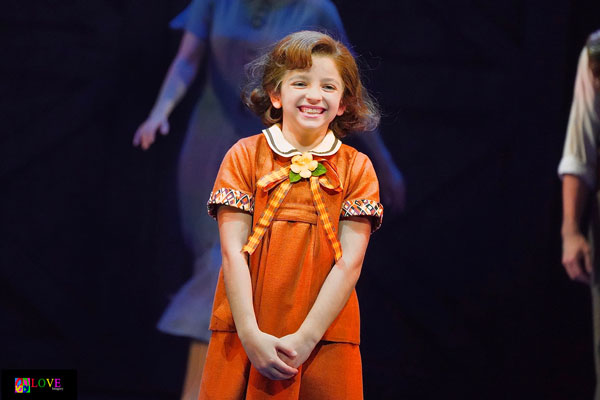 Adding, “I also love Judy Garland — she’s my favorite performer,” Sophie recalls, “I first started singing at the age of four,” joking, “My speech teacher suggested I try singing, because I talk a lot.”

When asked to reveal her favorite parts of Chasing Rainbows, Sophie declares, “There are so many,” before noting, “but I especially love ‘Swing, Mr. Mendelssohn’ — that one’s really funny — and ‘Zing! Went the Strings of My Heart,” which is one of my favorite songs.”

Lastly, we get a chance to chat with Chasing Rainbows’ writer Marc Acito who tells us how he was inspired to become involved with this production, in part, thanks to an idea of presenting the song, “Over the Rainbow,” to an audience from a unique perspective.

Acito suggests that “Over the Rainbow” can be experienced as a window to another dimension when he says, “Tina Marie Casamento — who conceived the show — came to me with the idea that we present ‘Over the Rainbow’ through the lens of the afterlife. Both Tina Marie and I have experienced loss in childhood. So — as you’ll see in the show — ‘Over the Rainbow’ can be interpreted as a metaphor for the afterlife. Given all of its possible meanings, it’s not surprising the song has resonated with so many people for such a long time.”

The lights dim and right from the opening number, “Shooting High,” the talented cast of Chasing Rainbows wows the sold-out crowd with endearing characters and top notch performances, notably by the members of the Gumm family vaudeville troupe where Frank Gumm — Frances Gumm’s father — is skillfully and sensitively played by Max Von Essen. 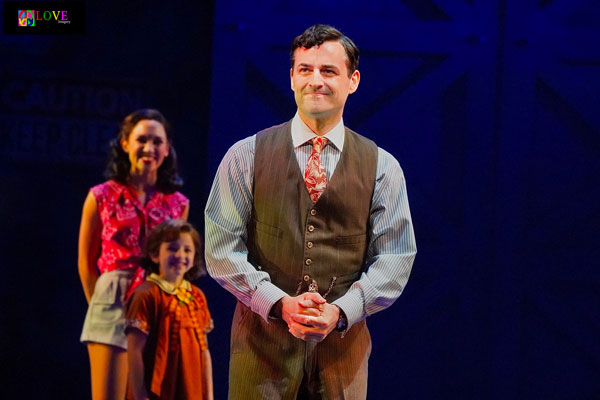 When Sophie Knapp as Baby Gumm makes her entrance popping out of a hatbox and, later, holds a note for an unusually long time, the audience loves it! 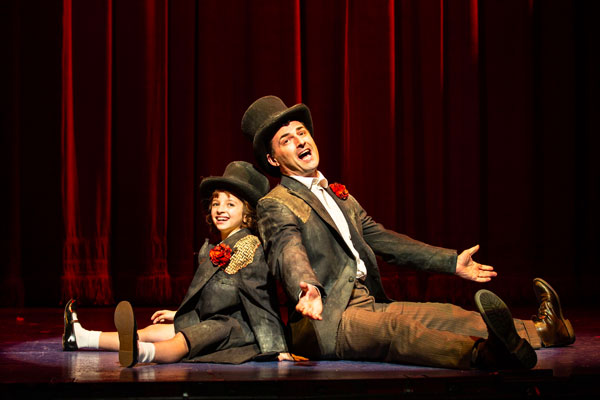 The members of the Gumm family arrive in California, and Frances — now portrayed by the sensational Ruby Rakos — is placed in a school for aspiring Hollywood actors run by Ma Lawler, played by the dynamic and versatile Karen Mason. There, Frances becomes best friends with an as-yet undiscovered Mickey Rooney, energetically and charismatically depicted by Michael Wartella. 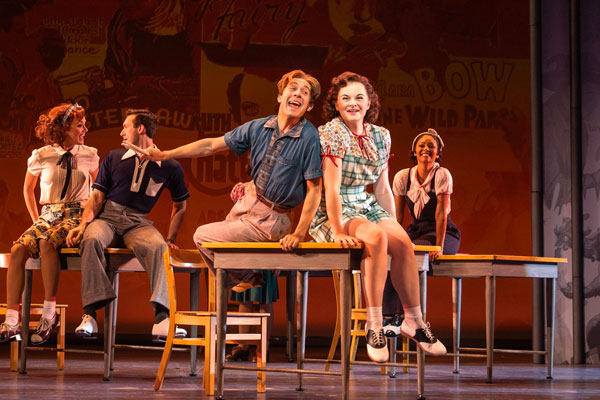 Judy, Mickey, and the rest of the teens are featured on “All Ma’s Children,” a high-energy jazz number where animated dancers tap on desks while rhythmic drummers happily drum on, around, and below the dancers’ flying tap shoes. 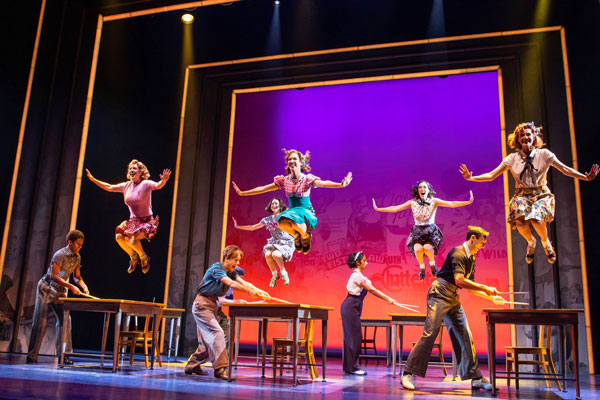 Young Frances changes her name to Judy Garland and auditions for MGM movie mogul Louis B. Mayer. After a not-so-strong start with her beloved father desperately trying to support her on piano, vocal coach/pianist Roger Edens — endearingly played by Colin Hanlon — accompanies her. 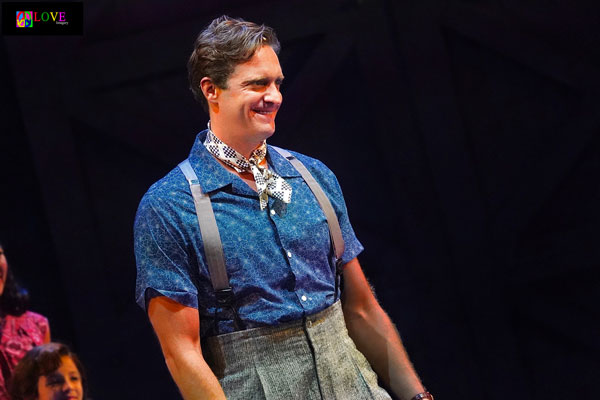 With Edens’ help, she knocks Mayer’s secretary, Kay Koverman’s, socks off singing with style and feeling on “Zing! Went the Strings of My Heart,” leaving the audience cheering for more.

Another highlight of the show features Judy and Deanna Durbin — played by Christina Maxwell — performing “Swing Mr. Mendelssohn.” On this number, the singers spar vocally with Judy swinging the tune and Deanna meticulously vocalizing operatic runs and trills much to the crowd’s delight.

Karen Mason, in a second starring role as Louis B. Mayer’s secretary, Kay Koverman, shines in the spotlight as she sings a clever interpretation of “If I Only Had a Brain” in which she lays out her plan to trick Mayer into thinking that it’s his own idea to cast Judy in his upcoming picture, The Wizard of Oz. 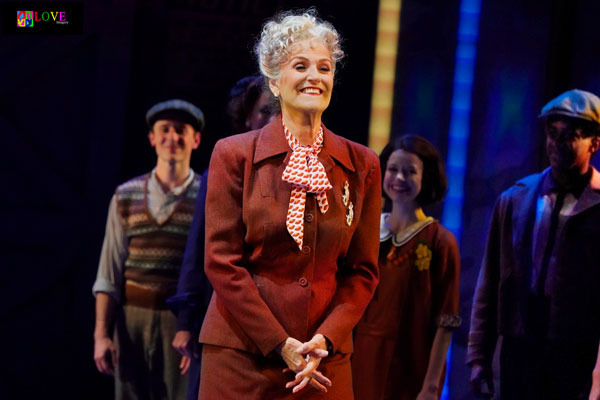 A true crowd-pleaser is the exhilarating “Got a New Pair of Shoes,” a dazzling and spirited number which features precision dancing with mannequins, tap shoes beating out complex rhythms, and rigorous downstage stepping which triggers an explosion of cheers and applause from the audience. 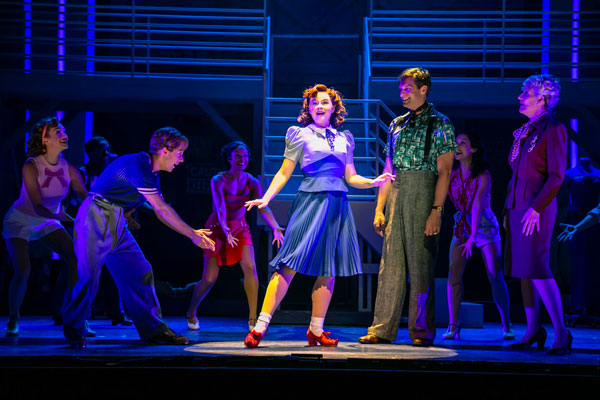 For many, however, the highlight of the show is Ruby Rakos’ emotional rendition of “Over the Rainbow.” Prefacing the number by describing it as a song about “Someone who lost someone she loves and can only visit him [singing] Somewhere/Over the rainbow” — Rakos brings many in the audience to tears with her poignant and sincere performance.

Following a well-deserved standing ovation for the cast, crew, and creative team of Chasing Rainbows, we take a moment to reconnect with writer Marc Acito.

Upon learning that many audience members were crying — in large part, thanks to the effect of his words, coupled with an abundant supply of amazing performances — Acito empathetically responds, “That’s the desired effect.”

When asked if there’s anything further he’d like to add, he gently replies, “I’m overwhelmed” before pointing to the stage and stating, “I really said it all up there.”

We also take an opportunity to chat with a number of audience members who share their thoughts with us about Chasing Rainbows: The Road to Oz.

Comments Christina from Staten Island, “Chasing Rainbows was awesome! Everything about it was great — I’m so glad I came.” 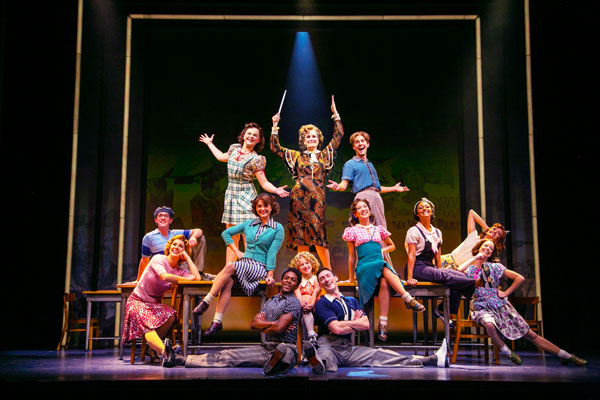 Todd from Manhattan reveals, “I’m a big fan of Judy Garland, and this show was amazing. I thought Ruby Rakos as Judy captured the true essence of Judy Garland. You could feel it in her singing — she was really fabulous.”

Joan from Livingston contends, “I loved Chasing Rainbows!” noting, “and Michael Wartella, who portrayed Mickey Rooney, was so great, I couldn’t take my eyes off him.” 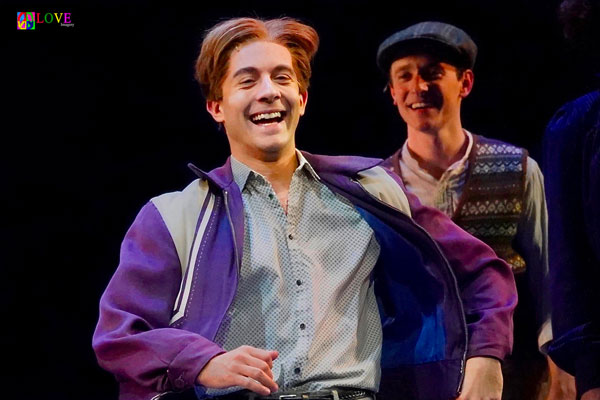 Linda from Livingston calls Chasing Rainbows, “Fantastic!” and “Amazing!” before joking, “How many more adjectives can I give you?”

Adding, “Ruby Rakos as Judy completely embodies Judy Garland, and the direction was excellent and the choreography phenomenal,” Linda further remarks, “and the ‘All Ma’s Children’ number — where the dancers played drumsticks on the tap dancers’ shoes — was brilliant, too,” concluding, “This show is not one to be missed — it needs to go to Broadway.”

Diana from Boonton Twp. agrees adding, “It’s already Broadway-ready,” before acknowledging, “Experiencing Ruby Rakos’ performance as Judy, I felt like a star was being born.” 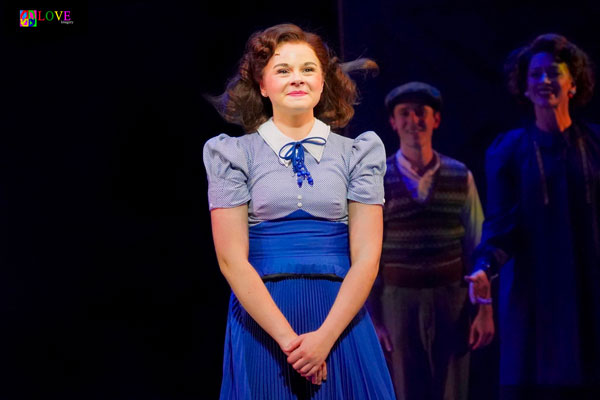 Lastly, we talk to Julie from Livingston, who declares, “Oh my gosh — I was blown away! I’ve been subscribing to Paper Mill Playhouse productions for years and this is my all-time favorite show.”

Continuing, “It was beautiful — it was perfect,” Julie concludes with a smile, “I didn’t want it to end!” 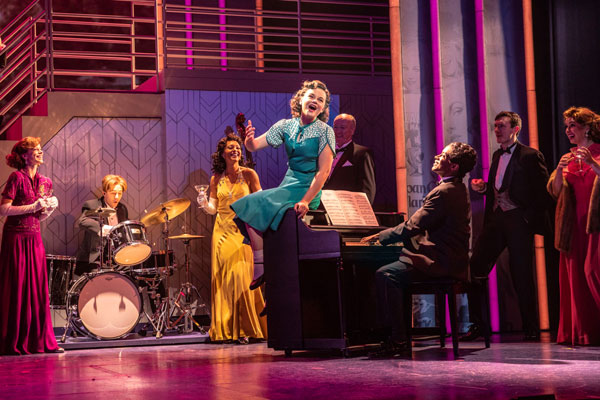 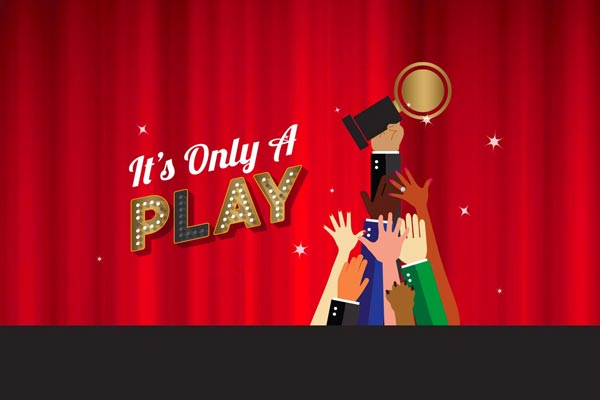 George Street Playhouse presents "It's Only A Play" by Terrence McNally 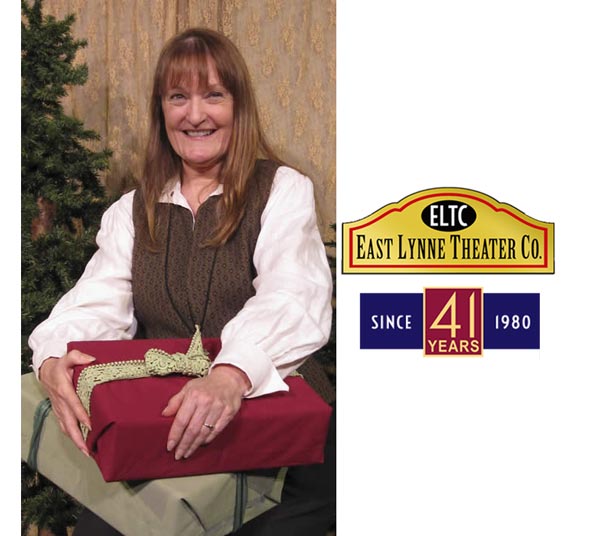 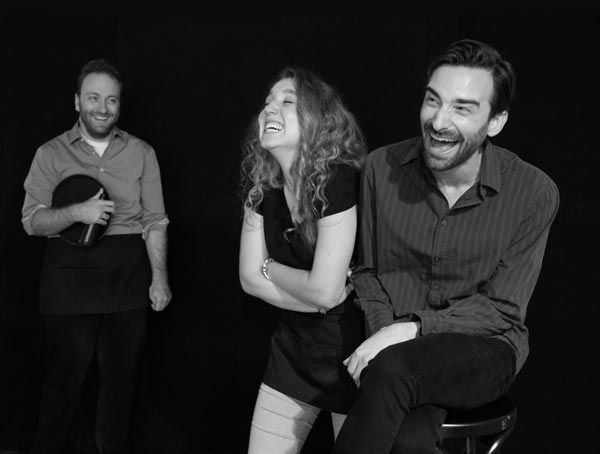