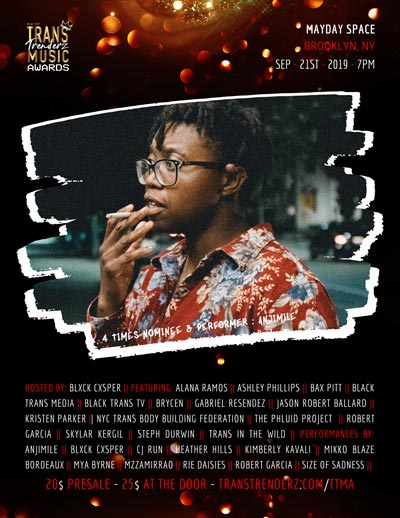 (BROOKLYN, NY) -- The Trans Trenderz Music Awards, the first awards show to celebrate the music of transgender and gender non-conforming artists is happening on September 21st at Mayday Space in Brooklyn, NY from 7:00pm-11:00pm. The show will feature performances from transgender musicians from across the country and beyond, as well as an awards ceremony. Tickets are available online.

An event the first of its kind, The Trans Trenderz Music Awards aims to bring visibility to trans folks in the music industry. Too often, trans representation only highlights our struggles. By highlighting the talent and creativity of trans artists, this show is an opportunity for media and music fans to discover new artists and give them more visibility and paid opportunities.

“Most trans musician’s I’ve met had a period post transition where they stopped making music because they felt like they didn’t stand a chance in an industry that sees them as a joke.” -Blxck Cxsper aka Kyng Rose (host of the event and organizer)

Nominations of trans musicians across the country and beyond were submitted. This event will be an opportunity for all involved to network and make lasting connections in their communities.

“This is more than an awards show. We’re hoping this show is inspirational to other trans musicians. We want it to be a beacon of light for a community that too often sees darkness.” -Steph Durwin (event organizer)

The Trans Trenderz Music Awards is a historic event, one that will bring together the trans music community, and provide visibility and opportunities to trans artists. After paying the performers, all profits will be donated to the Sylvia Rivera Law Project.

Trans Trenderz is a grassroots, non-profit record label based in NYC and Montreal. They sign transgender and gender non-conforming artists.