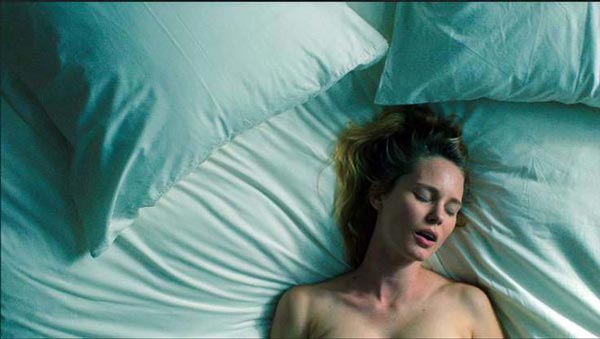 Here is the interview I did with Online Billie Director Lou Assous:

So every night, for two years, I came home from work and sat down with my friend Xavier Bazoge who just came out of Europe's most prestigious film school "La Fémis", and we started imagining a love story between a very normal guy and a waitress who happens to be a camgirl. We first tried to write the story through her point of view, but we wanted to get close to reality, giving a honest feel, so we ended up writing it through Jules' point of view since we're men! We also knew very early in the beginning that we wanted to melt genres. It starts as a romantic comedy and evolves in a rather dark way...

Nigrin:  Valentine Payen and Baptiste Lorber are so amazing as Esther and Jules. The played their roles so well. They are so real, so believable. Please tell us more about them and how you ended up casting them.

Assous: I met a lot of very good actresses but when I met Valentine I immediately knew she was Esther. We talked a lot about so many things, movies we like, movies we’d like to see in France. She’s very passionate so it was easy to get along with her. Then it took me a bit more time to find my Jules but I knew I wanted to cast someone who had experience in front of the camera. Valentine was experienced but not as much as Baptiste. I wanted to fine a balance with them, which I found. I knew him from his youtube comedy series, he’s like a Youtube pioneer in France. Through interviews I understood that we wanted to play in movies and challenge himself. So I found his contact, sent him directly an email, and he replied. When we met he gave me this feeling of a very confident man, ready to trust someone he’s never heard of before. But he liked the script. A few weeks later we started rehearsing all 4 of us, Xavier Bazoge (co-writer), Valentine Payen, Baptiste Lorber and I. We rehearsed a lot actually because we wanted to reach a point where the actors would know so well their characters that they would improvise around the text, to give a more spontaneous and natural feel.

Now I also really like how they look like on screen. Jules, a very normal, casual, simple guy and Esther remains a mysterious, discreet yet beautiful girl. They also make me think of the cute couple in Judd Apatow’s Netflix Series « Love », he’s a bit clumsy and hesitant whereas she just goes for what she wants.

Nigrin:  The film is really beautifully shot. The color palette is very appealing. Daniele Napolitano does a great job as DP.  Jennifer Augé's editing is also excellent. The transitioning from scene to scene and the editing of the sex scenes is very discreet yet still quite sexy. Tell us more about the editing and cinematographic style you chose to use in your film.

Assous: Well it was just a perfect collaboration. Jennifer Augé’s experience is unbeatable. Very early she worked for Robert Altman and now she works with the best directors here in France. My friend and co-writer Xavier happened to know her indirectly so we met and sent her the script. She loved it, she even cried reading it, to me this was like the best thing ever, even though I don’t like to make people cry. I didn’t believe she could accept working on a very tiny budget movie, since she’s used to much bigger productions. But she did, because she’s simply very passionate.

When we were done shooting, she was busy working on another project. But I was very impatient to see how the scenes would work, and for some of them I had a very precise idea of what I wanted. So I started editing it myself, just some randoms scenes. And I ended showing Jennifer 10-15 scenes, and we started working together like that. I’d show her some scenes and she’d do the same but better. What I just gave her was a kind of a « style », or more like a sort of freedom to play with the footage. I shot so much coverage for the whole movie I ended up with many many takes. But I knew what I wanted to show and Jennifer helped me to be more precise with the amount of informations you want to give on screen. II’ve never learned so much than during those 3 months of editing with Jennifer Augé, and I hope she’ll accept to work with me on the next movie!

I met Daniele Napolitano when I was in film school in New York City. We just love him, he’s a friend. We started working together on my 1st year thesis film. And now I just want to work with him all the time. We share the same vision, not on everything of course but we just love to work and learn together. It’s all about learning and trying to do better everytime. So for Online Billie, we watched a lot of movies together and focused on their visual (technically and artistically). We analyzed them, talked a lot. We watched « Before Sunset », « Blue Valentine » and many others. We wanted to make strong cinematography choices: go crazy with the colors in Esther’s room, the blown out windows, the contrast between the first light part that looks like a romantic comedy, and the second dark part that looks like psychological thriller. I also wanted to be close to my actors, with long focal lenses which made Daniele in a tough position but he managed it so well. The camera floats with the characters. It’s a very intimate movie.

Nigrin:  Most of the film is shot in Paris but where did you shoot the scenes at Jules’s mother’s home? That location is perfect as a country get away. Why does Jules take Esther there after their initial romantic encounter?

Assous:  First of all it’s a choice Jules’ character would take, bringing this extremely charming woman he just met in his childhood home. He doesn’t overthink things, if he just invites her because that’s what he would really like. And that just scare Esther somehow when he says « I’m so happy you came with me here ». It just sets how different those characters, differences they will have to learn to accept. There are many layers of interpretation but deep inside, the film is about accepting each other just for who we are. But the location itself is actually my own childhood home, my mother still live there. I knew I was going to shoot there, it was just easier, geographically, visually, and financially. It’s the most beautiful place on earth to me. My mother hosted and cooked for the whole crew and as Claude Chabrol would say : “A good set is a set with good food.”

Nigrin:  Are there any memorable stories while you made this film or any other info about your film you would like to relay to our readers?

Assous: Well did I tell you that my mother cooked for a 30 people crew and that it was delicious? There are actually too many memorable stories, but I would love to end on the cheesiest line ever: believe in your dreams, make them happen, and beautiful things happen!

Here is the trailer for Online Billie:

Three great short films will precede the screening of Online Billie. Here is more info on this screening:

The Beginning –  Sonni Rossi & Megan McClelland (London, England)   Touching on independence, romance, and adventure, this experimental Super 8 film revels in the transition from youth into adulthood, as it follows a young woman on her voyage to Los Angeles to start a life of her own. Attentive both to grand vistas and close-up views of sly smiles, the film brims with the excitement of a spontaneous adventure. 2019; 4 min.

Unbinding – Mauraya Sharma (Gurgaon, Haryana, India)   This sensuous short film focuses on a beguiling and enchanting woman, and her uncanny relationship with a century-old Banyan tree. In Hindi, subtitled. 2019; 12 min.


Albert Gabriel Nigrin is an award-winning experimental media artist whose work has been screened on all five continents. He is also a Cinema Studies Lecturer at Rutgers University, and the Executive Director/Curator of the Rutgers Film Co-op/New Jersey Media Arts Center, Inc.