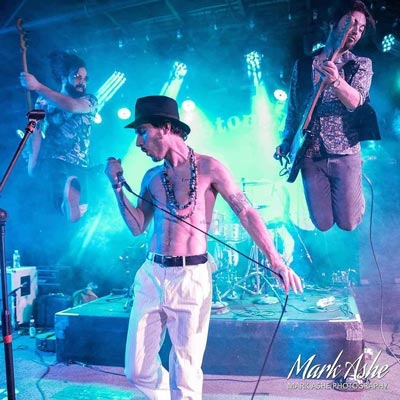 Soon to release a live album following a single, “On the Run,” and EP, “Sounds of the City,” last year on Jersey Shore-based Telegraph Hill Records, as well as a self-released 2015 self-titled debut LP and 2017 acoustic EP, “Out of the Blue,” Levy & the Oaks grew their following this summer during a live residency at Asbury Park Yacht Club. It was there that Telegraph Hill’s Joe “Pom” Pomarico and Matt “Fern” Fernicola recorded the forthcoming live album.

A slew of activity is sure to follow that release, but until then, Levy & the Oaks have one show on the books: as an opener for the Asbury All Star Abbey Road Band, who include Chris and Lou. They will perform the beloved Beatles album in its entirety in celebration of its 50th anniversary on Sept. 28 at Asbury Lanes. Telegraph Hill label mates The Foes of Fern and Des & the Swagmatics also are on the bill and their members also are playing in the All Stars with representatives from The Extensions, The Paper Jets, The Vaughns and more.

I spoke with the three founding band members – Levy, Lou & Chris – about that show, the live album, their label, their history and their future in the following interview! I hope you enjoy it and come out on Sept. 28 to see them, their label mates and the All Stars. They’ll also play Sept. 21 at The Seafarer Bar in Highlands.

Levy & Lou played together from 2006 to 2012 in a Union County-based Drive-Thru recording act called Socratic, which Levy joined in 2000. Twenty years down the road, how has the New Jersey music scene changed for the better and for the worse?
Levy:
It's hard to say if it's better or worse. I will say it is a lot different. I started out playing shows in firehouses and VFWs. It was all DIY. Kids were putting on shows for kids. A big part of the hype was word of mouth about a band. The Internet didn't really play a big role yet. Now you have to have your Instagram popping and looking cool. There is a big facade between your Internet presence and reality. There are still so many great artists in NJ. Even though venues have changed, I still know the music has not lost its innocence. We are all trying to reach a bigger audience.

Did Levy & Lou know each other before Socratic? If so, how?

Levy: We did! Lou was playing in a local band called Blue Star Drive, which I was always hanging around. It was a no-brainer when Socratic's bassist left to go back to college. We picked up Lou after a show we played in NYC. He never left from that point.

Levy, while you were touring the world constantly in Socratic, you abused alcohol, and now, no longer drink. You not only perform frequently in nightclubs that serve alcohol, but you also network just as often going to other people's shows in drinking establishments. Is it tempting to be near alcohol so frequently, and, if so, how do you withstand the temptation?

Levy: At first I separated from that life for a bit. Gave myself some time to really feel what I've done. That was four years ago. I quickly realized I could not avoid drinking or the environment it hosts trying to be in a rock band. These days, it is not hard for me to be around it. I don't judge others for doing what they do or anything like that. It's just not who I am anymore. I’m a different person and I’m happier. You can get stuck in a reality and feel like that’s the end. But trust me, you can change and move on with your life. That goes for anything you feel is holding you down.

When did Levy & the Oaks form, how and why did you gravitate to Asbury Park, and how did you hook up with Chris?

Levy: We wrote our first album back in 2015. It was at a time when I was just getting used to no drinking, so we took a break to let things simmer a bit. By the time 2016 came along, we were ready to finish the songs, put out the album, and really start to grind away at this new project. I was living in North Jersey at the time, but Lou was already down in Asbury making the rounds. My marriage fell apart, and I had nowhere to go, so Lou told me to come live with him in Asbury, which was one of the best things to ever happen to me. Weird enough we toured with Chris in 2007 while he was in another band on the tour. I didn’t even know this until i was playing with him in the Oaks for three months!

When Levy & the Oaks first started out, you were more of a roots-rock band propelled by Chris' lap steel, but lately, you've been more of a power-pop band. Why and how has the sound evolved and where is it going?

Levy: The roots-rock sound was something that happened naturally in the beginning. The songs just had that vibe even on acoustic guitar. When I moved to Asbury, I was surrounded more with harder rock bands. All the new material started to take on harder pop direction due to it. No matter what style we play, I always want to come off believable. Trends die and musical taste on the mass level will change. Being relatable and truthful will never go out of style.

Chris, you not only are a well-known member of Levy & the Oaks, but you also play George Harrison in a Beatles tribute act that often is booked far away from home. Yet, I know nothing about this Beatles tribute act, so tell me exactly what and who that is and what exciting things they have going on, especially around the 50th anniversary of ‘Abbey Road.’

Chris: I’ve been playing in Beatles tribute bands for the last 10 years mainly with Beatlemania Now. I got my start at Disney World playing with The British Invasion in 2009. The tribute world is very small, so you end up working with a lot of different acts. Sometimes you show up, and I’m meeting a John, Paul and Ringo I’ve never met before, and we’re putting on a show. It’s bizarre, but also tons of fun! I’ve been very fortunate to travel the world and play with incredible musicians through the years.

Beatlemania Now is working on an ‘Abbey Road’ show with a full orchestra at the moment. I will also be playing with “A Day in the Life: A Beatles Experience” playing the full ‘Abbey Road’ album at the Highfield Theater in Falmouth, Mass., on Sept. 20! 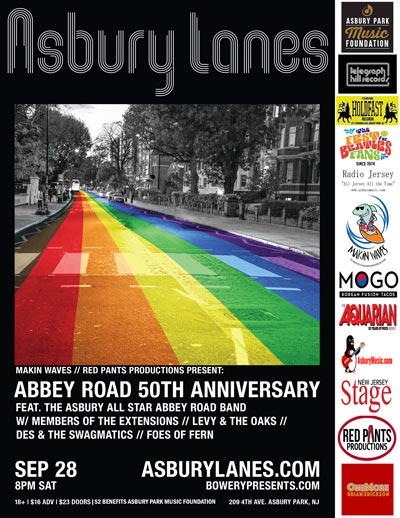 Chris, how are rehearsals going for the Asbury All Star Abbey Road Band to play the album in its entirety on Sept. 28 at Asbury Lanes?

Lou: Rehearsals are fun! Everyone involved loves The Beatles and the album so much that each rehearsal is filled with passion and excitement knowing that we’re only a few weeks away from being able to perform our own interpretation of one of the most historic and highly inspirational albums of all time!

Levy & the Oaks are opening for the All Stars. What are you all looking forward to most about that show and why?

Levy: I know the audience is going to be fans of that classic-rock sound. I’m most excited of seeing how we are perceived since we are influenced heavy from those eras. Plus, I love the stage at the Lanes.

Levy & the Oaks started as a trio, but now you also have Nick Ryan of Taylor Tote Band on additional guitar. What does he bring to the band, and is he now contributing to songwriting?
Levy:
He brings straight up madness! I saw him playing acoustic guitar once and was instantly blown away by him. I also just loved him in general. Adding him on guitar has giving us new energy and life. Our song ‘On the Run’ was written on the piano, and it was slow and melancholy. When Nick was shown it, he pepped it up and gave it the feel you hear on the recording. It wouldn't sound like it does without Nick.

Do Levy & the Oaks have a permanent drummer or are you still using fill-ins?

Levy: We have not had a permanent drummer in over a year. Tony (Baptist) and Owen (Flanagan) have kept this band alive more than they will ever know. It wouldn’t have happened without them. I won’t forget Ryan either who recorded songs on the EP and played live with us for a year. 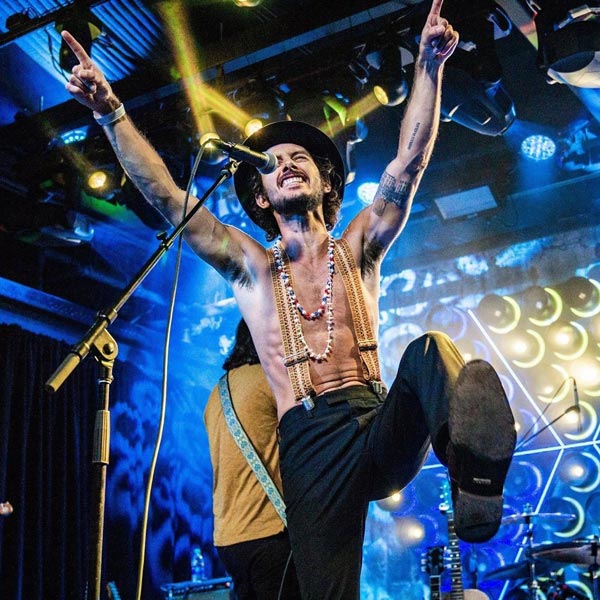 Levy & the Oaks will return Sept. 28 to Asbury Lanes to participate in a 50th anniversary tribute to The Beatles “Abbey Road” album on Sept. 28 with Telegraph Hill label mates Des & the Swagmatics and The Foes of Fern. PHOTO BY MARK ASHE

You recently recorded a live album at Asbury Park Yacht Club during your summer residency there. What will the album consist of, when and how will it be released as far as label and format, and will it feature special guests?
Levy:
The album will be a collection of the songs we played all summer. We wanted the energy to be seen by anyone who did not catch us this time around. It will be released this fall on Telegraph Hill Records. You will get video of the show along with a Spotify album. Our friend Mike (Squillace) joined us at that show to add sax to our sound.

What impact did the summer APYC residency have on the band?

Levy: It gave us a taste of how to interact with the audience more. There was always a different crowd to cater to this summer. If you are not in their face as much as possible, then you lose them.

What other shows do Levy & the Oaks have coming up through to the end of the year?

Levy: As of now, we have no further dates booked after the Beatles show.

What do you like most about working with Telegraph Hill, and what impact have they had on the band?

Lou: Telegraph Hill Records are some of our closest friends who have supported us and the Asbury scene from day one of their inception. Joe Pom and Fern are extremely dedicated to teir craft, ans we have them to thank for our recent live album coming out this fall.

Your most recent video for the title track of last year’s EP, 'Sound of the City,' was directed by Andrea Morgan. How did you like working with her and do you plan to work with her again in the near future?

Levy: We love Andrea! She was a friend of ours for a while, and when we came up with the idea, it was a no-brainer to ask for her help. She's talented in everything she touches. Would love to work with her again.

Levy: Keep your eyes open for the live album this fall! That is our major plug for the time being! 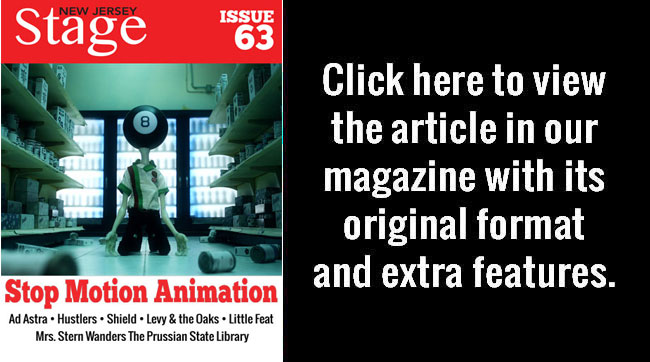