The Raven Age On Tour With Iron Maiden 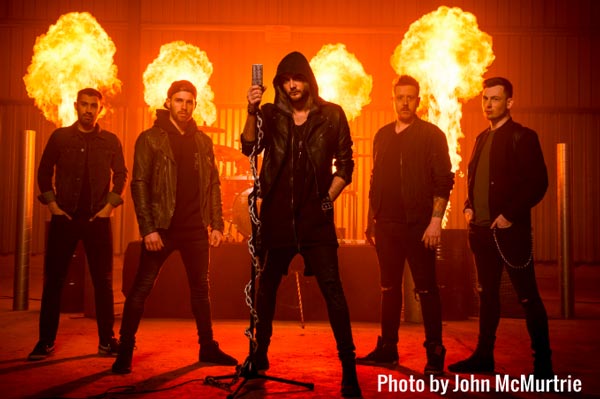 English melodic metalcore band The Raven Age have been taking North America by storm while on the road with Iron Maiden for the Legacy Of The Beast Tour this year. Delivering a live performance that combines both masterful musical skills alongside an electrifying stage presence, The Raven Age are leaving a lasting impression on fans across the US and Canada while looking forward to visiting South America later this year.

With just over two months left on the massive stadium and arena tour, the band is excited to continue to bring their unique melodies to life for fans. "It's awesome to showcase these songs on a big scale, we've dreamed big so will be making the most of it" shares Guitarist George Harris.

"We know how to present ourselves on a massive stage," agrees bassist Matt Cox. "For some bands, that can be intimidating. It was for us, to start with! But we've learned how good we are through it. We know how lucky we've been, a lot of bands would kill for the opportunities we've had, but we wouldn't be still here if we couldn't pull it off. We've supported everyone from Mastodon to Killswitch Engage to Gojira and have always held our own."

Tickets for the Legacy Of The Beast Tour are on-sale now at https://www.theravenage.com/.

Founded by guitarists Dan Wright and George Harris in 2009, The Raven Age has toured with the diverse likes of Iron Maiden, Tremonti, Mastodon, Killswitch Engage, Anthrax and Delain. After the announcement of new vocalist Matt James last year and a steady stream of new music and non-stop touring, it's an exciting time for the group who were awarded Best New Band 2017 by Planet Rock and championed as "the UK's next brightest metal hope" by Metal Hammer.

With a strong touring schedule, a new partnership with Explorer1, the Hollywood, California based music company, and new music on the horizon, 2019 is set to be a monumental year for The Raven Age.