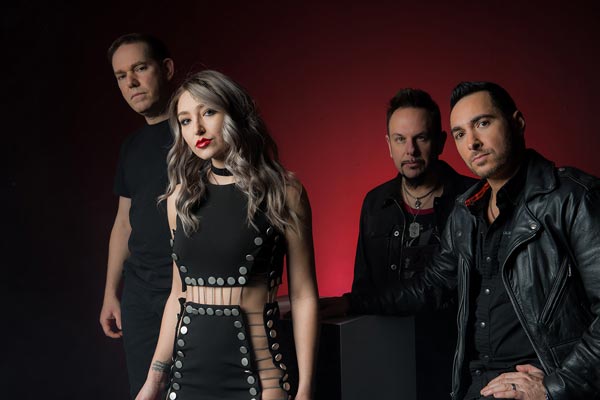 For 10 years, childhood friends Brian King (drums), Antonio Valenti (bass) and Joe Padula (guitars) have been slugging it out in the local music scene as the three founding members of the North Haledon-based Reality Suite. Their hard work and fierce determination have paid off. With Kimmii Heart, the melodic hard-rock band’s adored lead vocalist since 2013, Reality Suite have released their international debut for the Denmark label Lions Pride Music.

They are the LP’s first single and video, “Kiss the Ring,” a fun but furious refusal to conform within an abusive relationship, and the likely next single, “Wrong with Me,” a self-examining survival saga of a fool in toxic love featuring great gang backing vocals.

The sassy “Kiss the Ring” is the Makin Waves Song of the Week, which can be heard four times daily at AsburyMusic.com, 6:45 p.m. on Friday and Monday on the station’s “Radio Jersey” show, and at Makin Waves’ Spotify & YouTube playlists. “Kiss the Ring” also can be enjoyed as one of the year’s best videos by a Jersey band with Kimmii stepping into the ring at Savage Boxing & Fitness in Hackensack for a fun mix of beauty and beast infectiously lensed by Alex Kouvatsos of Blackwolf Imaging.


Throughout the album, I like the way Kimmii’s vox goes from angelically sweet to witchy snarl within a verse; Joe’s guitars solos soar and explode, and the machine-gun rhythms of Antonio and Brian make it sound as if there’s a double-bass drum on some tracks. Check it out live when Reality Suite open for L.A. ’80s rockers RATT on July 13 at the Keswick Theatre in Glenside, Pa. They’ll also play Aug. 24 at The Chubby Pickle in Highlands; Aug. 30, Crossroads, Garwood with Centennials and Circle of Grief, and Oct. 11, Revolution Music Hall in Long Island.