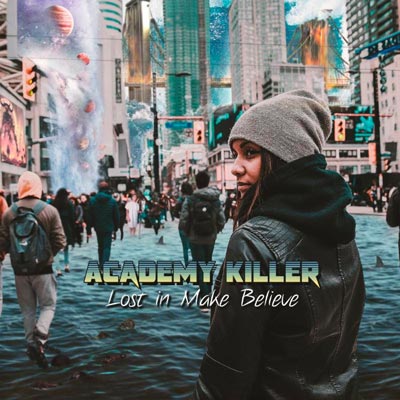 (HAMILTON, ON) -- Passion. Expression. Drive. Hamilton-based pop punk band Academy Killer incorporates each of these things into every note, and is gearing up to share it with the world via their forthcoming sophomore EP, Lost In Make Believe.

On Lost In Make Believe, the band shares: "The universe allowed our paths to cross and our experiences in life allowed us to create a record true to ourselves that we couldn't hold more dear. Making this record had an impact on us as individuals and we hope it can have a positive impact on listeners too."

Set to be released on September 20th, 2019, Lost In Make Believe encompasses the band's earnest, honest, and playful energy. Stay tuned for the first taste of Lost In Make Believe in the weeks to come. For additional information or to pre-save the EP, please visit: bit.ly/lostinmakebelieve-spotify.

Academy Killer rallies listeners to shake off prescriptive norms with their celebratory brand of rock 'n roll. The band builds on a pop punk foundation with driving, uplifting guitar work and soaring, impassioned vocals. Drawing inspiration from emo, modern pop, 90's rock and even the stylings of 50's crooners, they deliver lively melodies underscored by deeply introspective, yet relatable lyrics and themes of self-discovery, positivity, love and loss. Whether on stage or on the radio Academy Killer hooks listeners with their spirit and then lets them get lost in layers of songwriting and feel.

Established with 2016's Late to the Party EP, Academy Killer has quickly built a local following and broken onto the festival circuit with appearances at Burlington's Sound of Music, Hamilton's Supercrawl and Canadian Music Week in Toronto. The quartet, comprised of Kevin Talbot (vocals, guitar), Lucas Goldson (lead guitar), Omar Kurd (bass) and Nathaniel Schuster (drums), are united in their aim to create thoughtful music that's exciting and honest.

Academy Killer has recently emerged from studios and are eagerly preparing to share their second EP, Lost In Make Believe, out September 20, 2019. Pre-save the EP now at bit.ly/lostinmakebelieve-spotify.