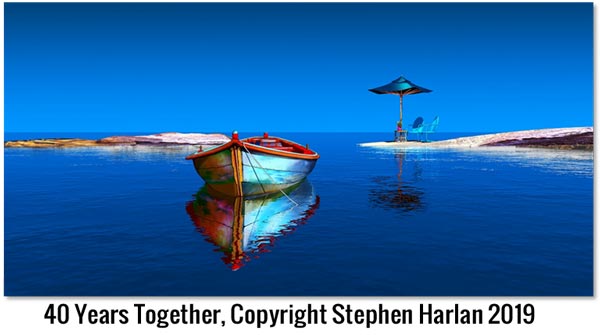 (STONE HARBOR, NJ) -- This July, Ocean Galleries welcomes Stephen Harlan and his captivating digital artwork exhibit. Making his first appearance in southern New Jersey, Harlan is best known for his bright and bold artwork that powerfully draws the viewer into a breathtaking scene, most often, along the coastal waters. The "Stephen Harlan - Water's Edge" exhibit opens at Ocean Galleries in Stone Harbor on Friday, July 19 and runs through Sunday, July 21, 2019.  Guests can meet Stephen Harlan at gallery receptions from 7:00pm to 10:00pm on Friday, July 19 and Saturday, July 20, and from 1:00pm until 4:00pm on Sunday, July 21.

In a world moving quickly into the future, Stephen Harlan has established his own unique style of digital artwork. Each piece of art in his collection is "visioned" and shaped in Stephen's mind, then meticulously rendered with an eye to "color and contrast" to create a magical mood - suspended in time…in space…and in the imagination.

Born in rural Minnesota, Harlan relocated with his family to Florida when he was in grade school, which inspired his love of the water having spent many days sailing into the sunset on his catamaran. Investigating the uniqueness of harbors and sunsets became a passion and his nautical focus continues to grow deeper every day, with the never-ending inspiration that comes from carefully observing the sea and the water in all of their contrasts. 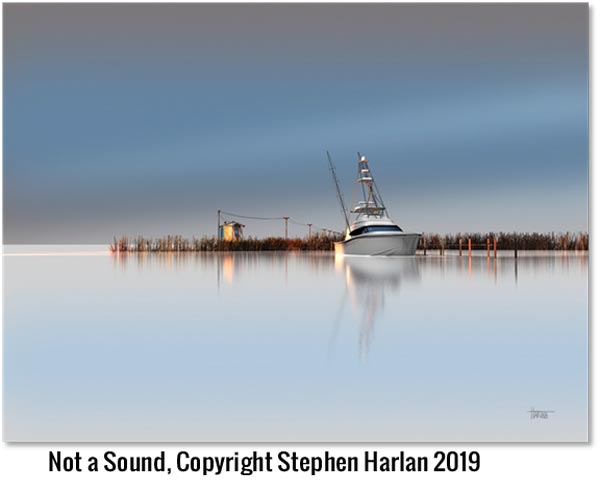 After relocating to California with his wife, his artistic style expanded, with images of the southwest and several other areas of inspiration becoming a part of his portfolio. Stephen's portfolio of abstract images also grew as increased interest and requests from California and West Coast collectors surfaced.

Having traveled and lived in many beautiful locations, Harlan has a lifetime of vivid memories from which to draw on as he creates each unique painting. Today, the Harlan family resides in North Carolina, where the Atlantic Ocean and Intercoastal Waterway serve as a constant source of stimulation for future work.

Stephen Harlan explains the creative process for each piece of art, "My inspiration and motivation stem from wanting to create a general feeling of ‘I want to be in that place.' Even though I have a general idea of the mood I wish to capture, I never really know what a finished painting will look like until I actually print out a large proof."

In planning the 2019 summer season of exhibits, gallery owner, Kim Miller, sought out Harlan in large part because of his coastal-themed art. "Stephen's water scenes are simply breathtaking. We know fans of the Jersey Shore…and beaches everywhere…will love his captivating artwork." 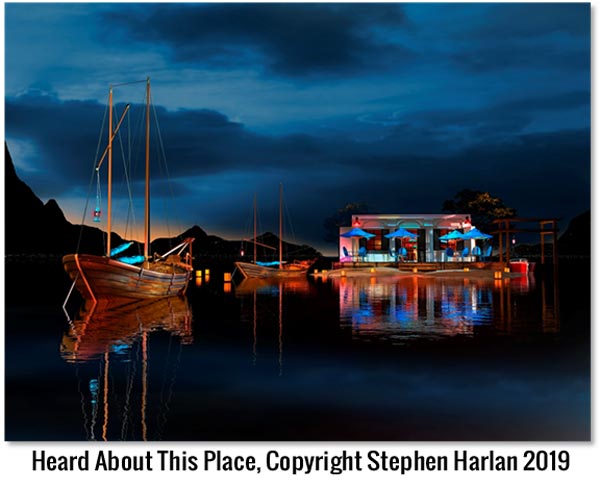 Throughout his 30+ year career as an artist, Stephen Harlan's iconic work has adorned the covers of national magazines from commercial, industrial, and musical amphitheater promotions to trendsetting publications.

The free exhibition is open daily from 10:00am until 10:00pm throughout the weekend, with all artwork in the collection available for acquisition. 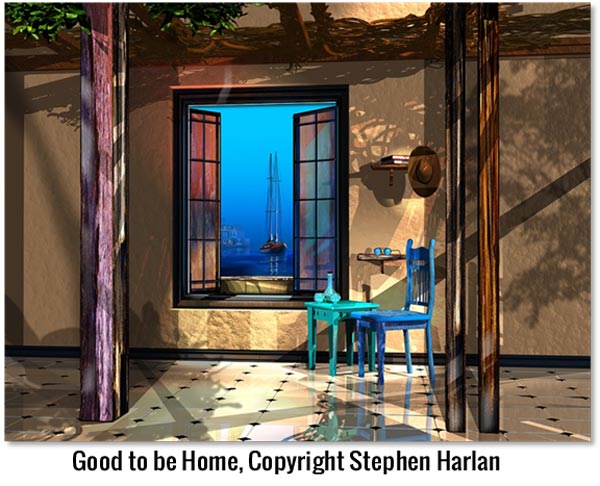 In addition to an extraordinary collection of artwork and custom-framing, Ocean Galleries also offers a variety of hand-made crafts from local, regional, and national artists in America, such as glass, pottery, jewelry, and furniture.  All summer exhibitions take place at the Stone Harbor, located at 9618 Third Avenue in Stone Harbor, New Jersey.  Ocean Galleries also has an Avalon, NJ location at 2199 Ocean Drive. For seasonal hours at both gallery locations, call 609-368-7777 or visit oceangalleries.com