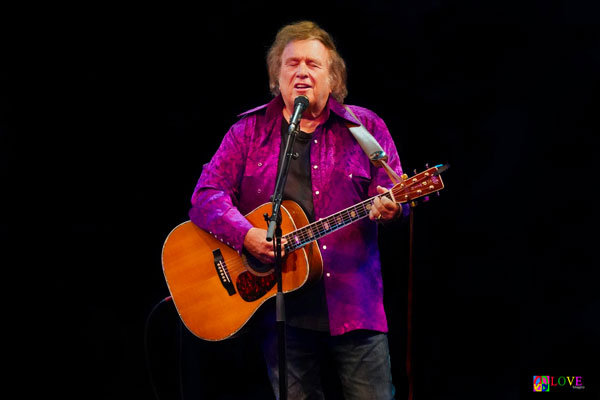 Music is in the air this Friday, June 5, 2019 at the South Orange Performing Arts Center in South Orange, NJ, where a sold-out crowd will soon enjoy a concert by the legendary singer/songwriter Don McLean.

As we wait for the auditorium doors to open, we chat in the lobby with Linda from Cranford, who confesses, “I remember sneaking into the city to see Don McLean in the Village when I was a teenager.”

Continuing, “A lot of today’s music all sounds alike, but with Don McLean, every song he wrote was different,” Linda remarks, “I love his voice, but I haven’t seen him since the late 70s.”

Adds Ray from Cranford, “I saw him once about 20 years ago with Carole King, so we’re really looking forward to hearing him again tonight.”

Garcia, who was born in Los Angeles but currently lives in Queens, NY, tells us, “My grandmother was a piano teacher so I played the piano, but I didn’t start playing guitar and writing songs until I was 18.”

Acknowledging, “I grew up listening to a lot of different music,” Garcia credits artists like Woody Guthrie, Bob Dylan, and Joni Mitchell as influences — especially with regards to their thought-provoking lyrics when he says, “I learned to live my life through the lessons they taught me with their music.”

Garcia’s wife, Melissa, who is manning the merchandise table tells us, “Joshua is an incredibly talented musician. He’s opened for Don McLean before, and we’re so happy he’s doing it again; it’s so great for him to be heard. To be honest, he’s an old soul born in the wrong year, but once you hear his music, you’ll be hooked.”

The lights dim and Joshua Garcia takes the stage alone with his guitar. He begins tonight’s set with “Sewin’ My Dreams (in the Suitcase Factory),” a song about his grandmother. With his clear, natural voice and deft guitar-playing skills, Garcia immediately connects with the packed SOPAC house. 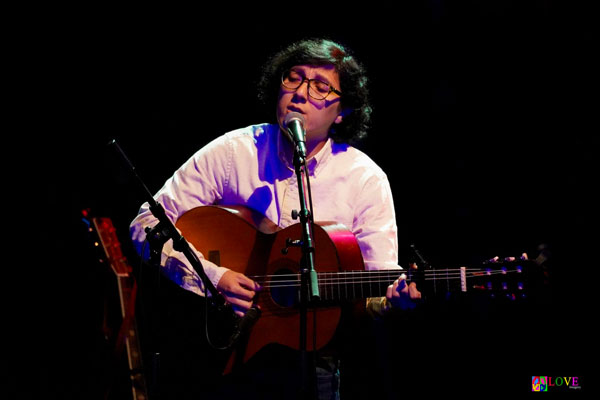 After performing a story song about a military pilot entitled “That’s the Way You Drop a Bomb,” Garcia announces, “My mom is in the audience tonight. She’s quite a wonderful woman, and she bought me this guitar.” Here, he performs “Bruises (Love Ballad #17)” especially for her.

Alto singer Sophie Busker joins Garcia, and the pair creates beautiful two-part harmony on “The Alhambra Hotel” before Garcia performs another original, “Everything’s Quiet and the People Are Tame.”

Following a short intermission, Don McLean takes the stage where he grabs his acoustic guitar and announces, “Are you ready?”

When the crowd responds in the affirmative, McLean, 73, launches into a rousing rendition of “A Lotta Lovin’.” His voice sounding as strong as ever, McLean and his band — Tony Migliori on piano and keyboards, Carl “Vip” Vipperman on guitar, Brad Allen on bass, and Jerry Kroon on drums — dazzle on this upbeat honky tonk number. 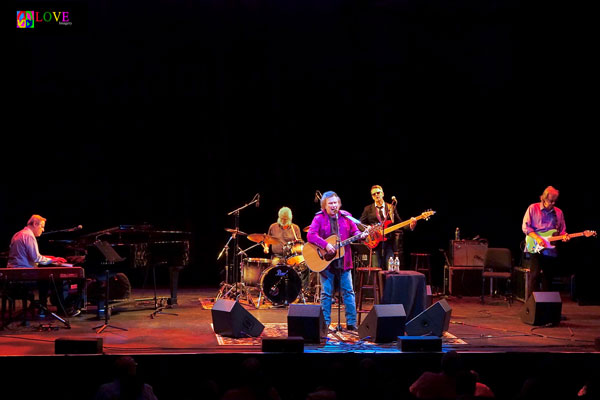 Following a rousing rendition of Buddy Holly’s “Everyday,” McLean performs the title song from his latest album, Botanical Gardens. On this bluesy rock ballad, McLean’s voice is resonant and pure and his backup band tight.

The crowd cheers and McLean responds by stating, “Thank you,” before joking, “I’ll sing them all for you — I’m not going anyplace.”

The country twang of a Fender electric contrasts with the boom-chic sound of the drums and solid bass playing on the bottom of the rockabilly tune, “The Lucky Guy,” a number which concludes with McLean yodeling at the end of the song. 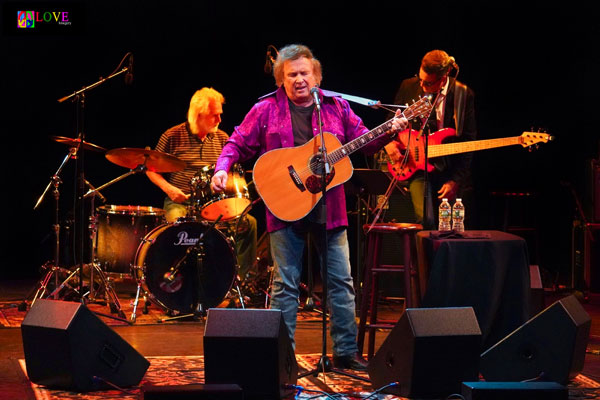 “Crossroads” is a number from McLean’s chart topping 1971 album, American Pie. Accompanied by Tony Miglioiri playing a stunningly beautiful piano part, McLean’s heartfelt vocal cries as he sings “‘Cause all roads lead to where I stand/And I believe I’ll walk them all/No matter what I may have planned” on this telling ballad.

Following huge applause, McLean’s rich baritone fills the theater with his 1970 classic, “And I Love You So,” a number which was covered by artists as diverse as Perry Como, Glen Campbell, Harry Connick, Jr., Olivia Newton-John, and Elvis Presley. 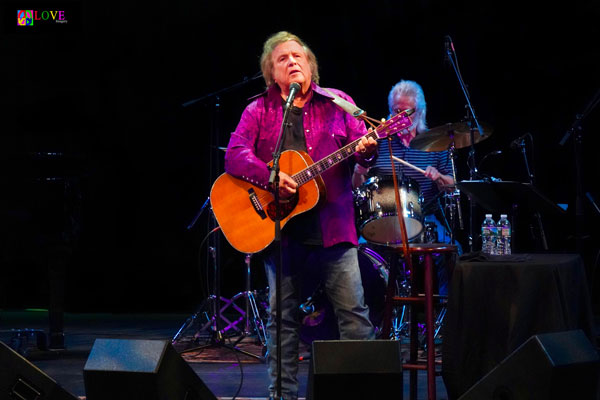 Audience members bop their heads on the barrelhouse rocker, “Hide Nor Hair,” and McLean smiles as he listens to Vipperman’s slide guitar solo. Then, Tony Migliori channels Jerry Lee Lewis as he tinkles the ivories on Don Williams’ “Tulsa Time.”

McLean’s voice takes center stage on the honky tonk two-step “Bronco Bill’s Lament,” where he croons, “I’m an old man with nothing left to say/Oh God how I worked my life away.” Then, the backbeat of Jerry Kroon’s drums propel “Winterwood,” another tune from the American Pie album, forward.

Taking a moment to chat with the audience, McLean says, “When ‘American Pie’ hit the charts in 1971, all the theaters wanted me in New Jersey,” before asking, “Are you enjoying?” and acknowledging, “ I don’t use a set list — I kinda invent it as I go along.”

Here, he performs the title song from his debut album, Tapestry. Standing center stage in the spotlight, McLean performs this environmental song, his strong voice declaring, “Every crisp leaf that falls, all the flowers that grow/On this colorful tapestry, somehow they know/That if man is allowed to destroy all they need/He will soon have to pay with his life, for his greed.” 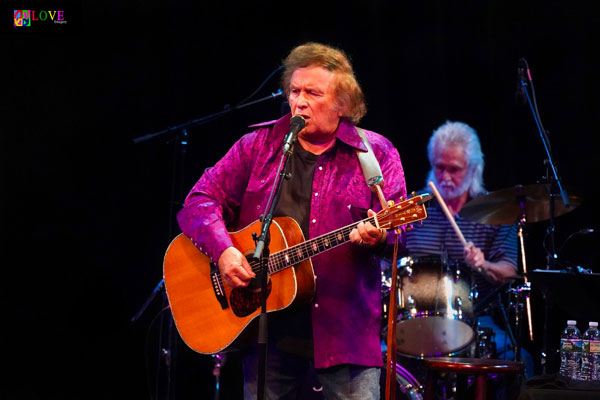 A highlight of tonight’s concert is McLean’s performance of yet another song from Tapestry, “Castles in the Air.” With its fancy fingerpicking, this countryfied number with its catchy rhythmic underpinnings captures the audience with its hypnotic groove and McLean’s earnest vocal performance.

After exclaiming, “Sounds good in here!” McLean launches into one his biggest hits, 1971’s “Vincent (Starry Starry Night).” The song’s poetic lyrics paint pictures as McLean’s voice rings out over his guitar. Soon, the rest of the band joins in. Jerry Kroon’s cymbals roll and Brad Allen’s bass walks gently along with Tony Migliori’s keyboard as they all support McLean’s heartfelt vocal performance. 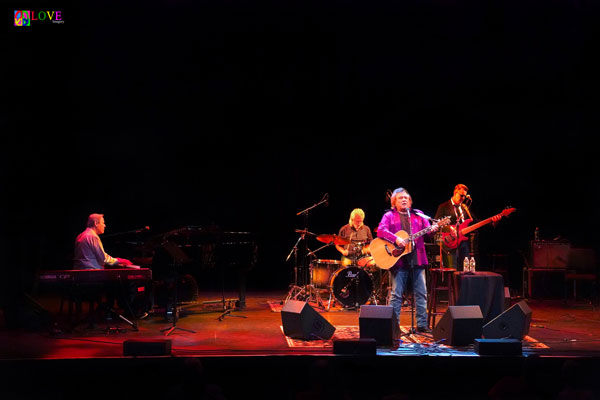 The audience responds with cheers, whistles, and a standing ovation.

Announcing to the crowd, “Let’s do a couple of tunes together,” McLean invites the audience to “throw those inhibitions away” and join him in singing “The Keys to the Kingdom.” Brad Allen dances around with his bass as audience members sing along on this bluesy spiritual, their heads bopping, hands clapping, and fingers snapping along.

McLean talks about growing up in nearby New Rochelle, NY, saying, “I went to public school,” confessing, “I was bit of a troublemaker,” before attending Iona College, where, he reveals, “I earned a degree in finance.”

As such, McLean proudly exclaims, “I own all my songs, and I hope my songs have been good friends to you.” Commenting on his life as musician, McLean asserts, “I would die without this. This is what I’m supposed to do.” 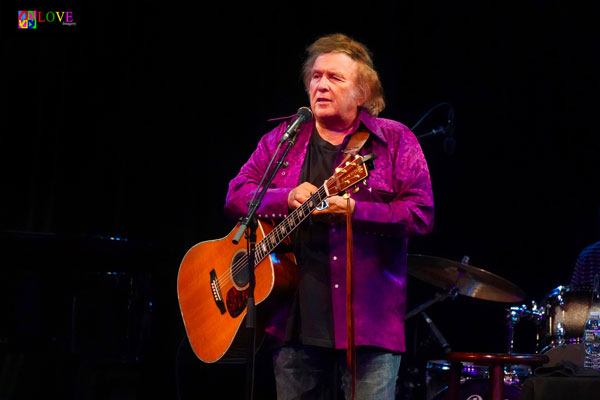 After stressing the importance of the rising influence of the guitar in American music, he launches into a Josh White song, “Uncle Sam Says,” a bluesy number from the early 1940s about prejudice and segregation in the armed forces. Featuring bass player Brad Alden on a bluesy and funky bass solo, the musicians play off one another for the audience and for themselves.

Exclaiming, “You make me feel 60 again!” McLean introduces the members of his band before he performs one of the highlight numbers of the year: a complete version — and more! — of his epic 1971 composition, “American Pie.”

Opening with the iconic, “A long, long time ago/I can still remember how that music used to make me smile,” the audience joyfully sings along — some standing and dancing — as McLean transports everyone back in time on this certified pop classic. 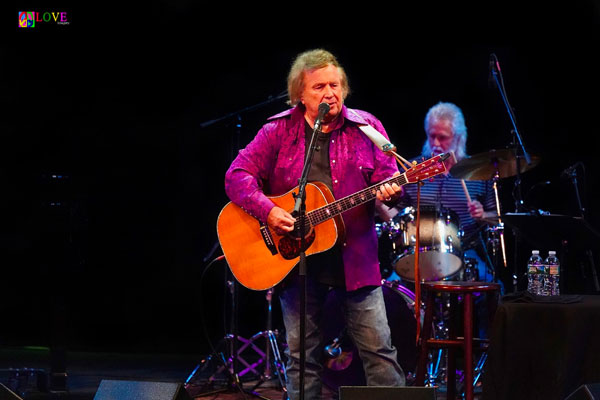 Singing about such characters as “the jester,” “the king,” “the birds,” “the sergeants,” “Jack Flash,” the “girl who sang the blues” and more, audience members are taken on a poetic ride through post-War American music history. The band follows with an instrumental jam and everyone joins in on the famous “Them good ole boys were drinking whiskey and rye/Singin’ this’ll be the day that I die” chorus.

After the audience stands and cheers, McLean and Co. launch into an upbeat reprise of highlights from the song. Hands clap overhead as audience members sing along, bringing them back to simpler days when music like this was a part of everyone’s experience. 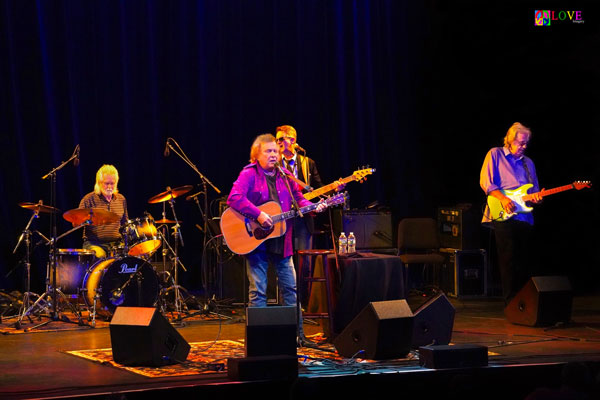 Bowing alone as the band plays him off, McLean thanks the crowd announcing, “I really appreciate it!”

As members of the audience make their way out of the SOPAC auditorium, we chat with several in the crowd who share their opinions of tonight’s concert.

Exclaims Marybeth from Berkeley Heights, “Don McLean is fantastic! It’s unbelievable that he is 73,” before noting, “His version of ‘Vincent’ was amazing, and ‘whiskey and rye’ — you gotta love that!”

Comments John from Berkeley Heights, “I was pleasantly surprised. All the musicians were unbelievable, and I can’t believe Don McLean did a 15 minute version of ‘American Pie.’” 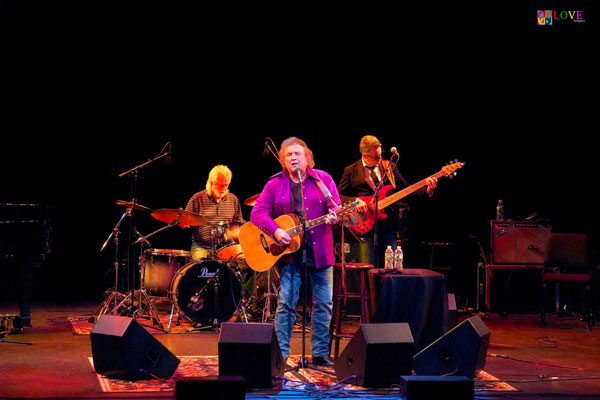 Diana from Maplewood remarks, “I had such good time!” recalling, “It brought me back to a time when I was a teenager and would sing ‘American Pie’ at top of my lungs in my car!”

Asking, “Who wouldn’t love Don McLean?” Diana adds, “It’s amazing how relevant his music is today. He was fabulous, and his warm-up act, Joshua Garcia, was very poignant.”

States Kerry from Morris Plains, “Don McLean was awesome. He brought me back to a time when I was in fifth grade, when I listened to his music in elementary school.”

Stressing, “This type of music is so important again — it wakes us up,” Kerry concludes by adding, “SOPAC always brings in such amazing performances to the community.”

Lastly, we chat with Lisa from Montville, who declares, “Don McLean was amazing! His band was polished tight and well-composed, and they were properly led by their leader, Don McLean,” before concluding, “I thought he was just flawless.” 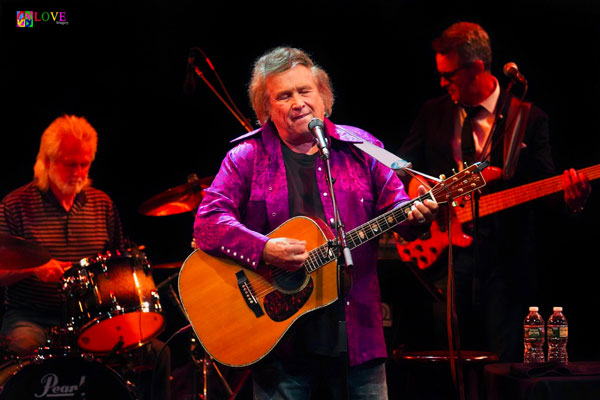 To learn more about Don McLean, please go don-mclean.com. For info on upcoming concerts at SOPAC in South Orange, NJ — including Rufus Wainwright on August 24, Graham Nash on September 25, and Peter, Paul and Mary’s Peter Yarrow and Noel Paul Stookey on October 11 — please click on sopacnow.org. 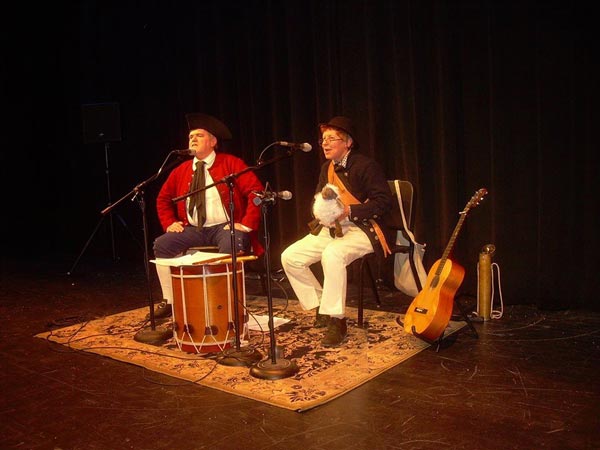 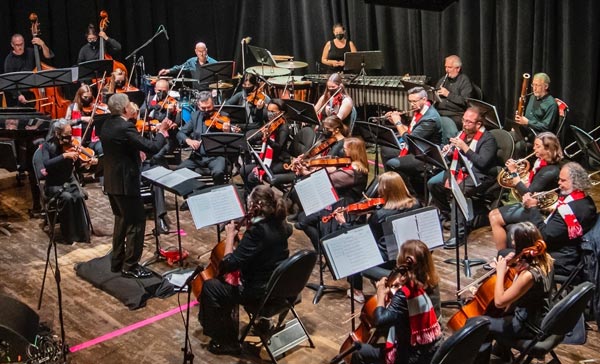 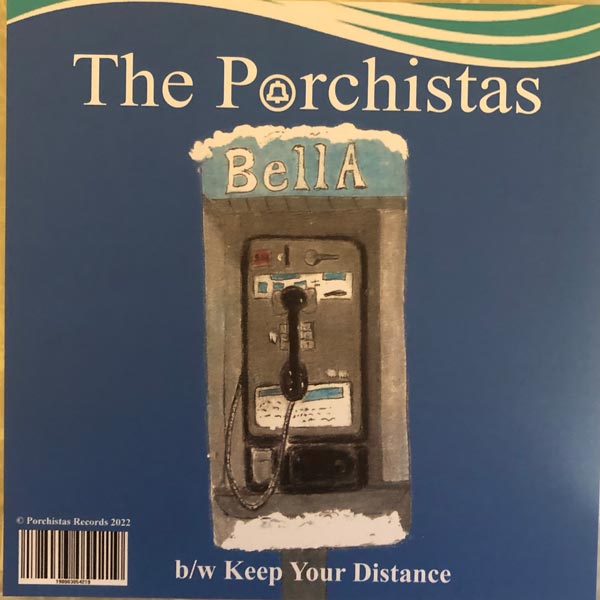