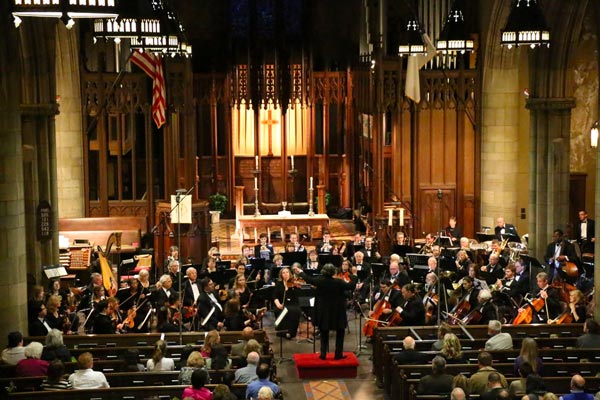 (PLAINFIELD, NJ) -- The Plainfield Symphony Orchestra, New Jersey’s oldest community orchestra has announced its 100th season. The 2019-2020 series will feature an American premiere of a noted work performed by its composer; internationally acclaimed soloists; and a repertoire that will draw from the Symphony’s celebrated past while looking to the future.

“Creating the centennial concert programs has been a true labor of love for me,” said Charles Prince, PSO’s music director. “PSO is actually a national treasure, and our rich history of talented performers and conductors offers many exciting highlights to bring in during this season.” Prince, an internationally acclaimed conductor, is celebrating his 11th season with PSO.

“Batik and Bartok” opens the season on Saturday, October 12, 2019, with Roland Batik as guest pianist. Batik, an Austrian pianist, composer, and jazz musician fuses classical elements with jazz. He will perform in the American premiere of his Piano Concerto No.1 Meditation on Peace. The program will also feature Bartok’s Concerto for Orchestra.

November 23, 2019 will see the return of the annual Pops concert, always a standing room only event. This year PSO will ring in the holiday season with “Strauss Meets Sousa” on Saturday, November 23. The concert will feature selections from Strauss performed by international vocalists. “Strauss will pair nicely with John Phillips Sousa, who holds a high place in Plainfield history,” said Prince. “The first concert with the band he formed after leaving the United State Marine Corps was held in Plainfield in 1892, so we’re acknowledging that history with this concert.”

PSO’s annual Free Children’s Concert will be held on January 25, 2020, at 3:00 p.m. “Peter and the Wolf,” Prokofiev’s classic composition, will enthrall and educate young listeners. The performance will be narrated by a surprise celebrity guest. This free performance, PSO’s gift to the City of Plainfield, plays to an overflow crowd each year.

The centennial season will conclude on April 25, 2020 with Mahler’s 2nd Symphony (The Resurrection Symphony). “I’ve wanted to conduct PSO in Mahler’s 2 nd Symphony for some time, and it’s fitting that it will crown the performances of this special season,” said Prince, who is noted for his Mahler interpretations. The performance will feature an accompanying chorus.

In addition to the musical highlights, the 2019-2020 season will include spectacular social events. “Plainfield Symphony Centennial Showcase” on September 21, 2019, PSO’s annual blacktie gala, will be held this year at the Plainfield Country Club. This year’s gala will feature the music of Peter Duchin and his Orchestra, a return performance for Duchin, who performed at PSO’s 65th anniversary celebration, also at the Plainfield Country Club, in 1966.

Saturday, December 7, 2019, is PSO’s annual Holiday Boutique, held this year at the Plainfield Country Club. The Boutique features exceptional exclusive vendors offering unique holiday gifts of jewelry and décor. This year’s boutique will offer brunch at PCC by reservation, making this a delightful day of shopping and socializing.

Concert and ticket information are available online at www.plainfieldsymphony.org or by phone (908) 561-5040. Subscriptions and individual tickets can be purchased online, by mail, and at the door. PSO performs in the sanctuary of historic Crescent Avenue Presbyterian Church, 716 Watchung Avenue, Plainfield, NJ. All concerts begin at 7:00pm, except for the January Afternoon Family Concert, which begins at 3:00pm.

As New Jersey’s oldest community symphony and the third oldest continuously operating community symphony in the United States, the Plainfield Symphony Orchestra represents the highest standard in musical excellence in programs designed to educate and uplift local audiences. Funding has been made possible in part by the New Jersey State Council on the Arts, Department of State, a partner agency of the National Endowment for the Arts, through a grant administered by the Union County Office of Cultural and Heritage Affairs.