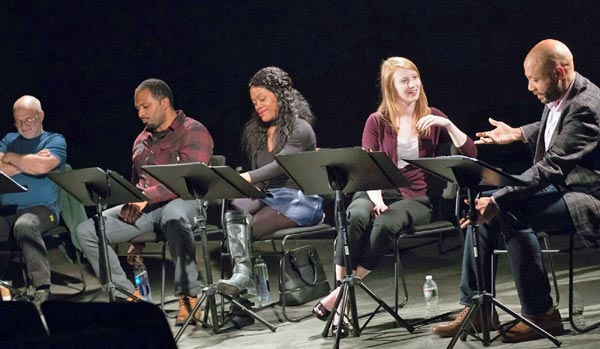 (JERSEY CITY, NJ) -- Jersey City Theater Center (JCTC) concludes its Spring 2019 Season at Merseles Studios with the Jersey City New  Play Festival on May 30 and May 31 at Merseles Studios in  Jersey City.  Back-to-back evenings of cutting-edge theatre by emerging playwrights, the Jersey City New  Play Festival opens with a staged reading of a new play about the life and times of Shirley Chisholm, the first black congresswoman and the first black woman to run for president. On May 31, a trio of short plays exploring a range of themes –Lost Property, Stateroom, and An Encounter – will be presented.

JCTC is committed to exposing audiences to fresh voices in theatre and the arts. The plays in the festival were selected from dozens of submissions and will be featured in a staged reading format using professional actors and directors, followed by a talk-back with the audience.

“With the four plays we’re presenting as part of the Jersey City New Play Festival in May, we are concentrating on writers from diverse backgrounds and continuing to expand our circle of new voices,” said Olga Levina, Artistic Director, JCTC. “Theater is ever-changing and we want the writers, actors and directors together with the audience to be part of that change.”

Staged readings of new plays not only enable audiences to discover new writers, but invites the community to collaborate in the theatre development process. Play readings have been integral components of JCTC programming. This year is the 3rd Annual Jersey City New Play Festival. In March –Woman’s History Month –  JCTC presents readings of plays focused on Feminist issues, in  Partnership with The Writers Theatre of NJ.

Given the success of that program, JCTC extended the festival into May with a new selection of plays, expanding the festival’s parameters to include short works and Unbossed & Unbowed – a one-woman play. Written and performed by Ingrid Griffith, the first act was presented by JCTC in October. The Jersey City New Play Festival will be the debut performance of the complete, two-act version of Unbossed & Unbowed.

The two May days of the Jersey City New Play Festival were curated by Catalina Florina Florescu, a professor of theater and comparative literature at Pace University and Steven Vessella, Theater Manager, JCTC.

“The plays selected for the festival bring a fresh look into current issues,” said Florescu, who is also the New Play Development Curator for JCTC. “Via stage readings and an audience Q & A, each playwright gets the chance to receive feedback from the audience to further develop the impact of their work.”

May 30 - Unbossed & Unbowed – Shirley Chisholm was the first black woman elected to the U.S. Congress.  In 1972, she ran for the Presidential nomination of the Democratic party. Written by Ingrid Griffith and directed by Ana Margineanu.

May 31 - Lost Property – Love, loss, houses, land and how little we understand each other. ​Written by Megan Furniss and directed by Jacquelyn Claire de Villiers​.

Stateroom – In spite of his addiction, Renee’s lover holds the reins in their relationship. When he takes her on a cruise to Mexico, she is forced to question whether her subjugation is worth fighting for.​ Written by Karin Diann Williams and directed by John Pietrowski.

An Encounter –  A devoutly religious woman has an encounter that tests the foundations of her faith. A play about the mystery of evil and the limits of forgiveness. Written by Michael McGoldrick and directed by John Pietrowski.

Tickets are $10 and available for purchase online.  Doors are at 6:30pm; Performances at 7:00pm.  Jersey City Theater Center is located at Merseles Studios ( 339 Newark Avenue) in Jersey City, New Jersey.

Funding for Jersey City New Play Festival was made possible by generous support from the Hudson County Office of Cultural & Heritage Affairs/Tourism Development, Thomas A. DeGise, Hudson County Executive and the Hudson County Board of Chosen Freeholders and the New Jersey State Council on the Arts.

Jersey City Theater Center, Inc. (JCTC) presents programming at Merseles Studios and White Eagle Hall. JCTC is a nonprofit, 501c3 arts organization committed to inspiring conversations about the important topics of our times through innovative and progressive performing and visual arts that celebrates diversity, bringing communities closer together and enhancing the quality of life.