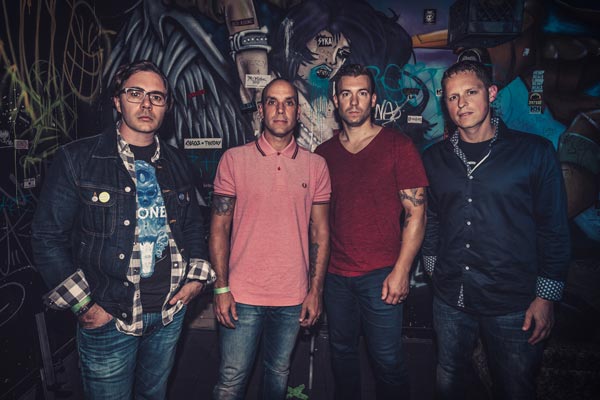 Trenton-based Yorkshire Tenth slash ‘n’ burn like a cross between The Alarm and Smashing Pumpkins on their debut full-length, New Again.  The band will celebrate its release on March 8 at Mill Hill Basement with Scoville and Ultra Major. Photo by Albert Rende

Throughout, a big beat and jangly, slashing guitars remind me of The Alarm, but with a menacing angst that creates a Smashing Pumpkins vibe. Although at times, the songs meander and whine, the passion they express and energy they convey is enjoyable.

Stand out tracks include “Transition,” a rhythm fest about self-intervention, and “Summer Carols,” a loving salute to the Jersey Shore that examines “promises renewed, promises restored.” The great buzzing, burning guitars on “Two Wrongs” also are a treat.

“Videosyncracies” starts out great with a strong hook in the form of counter gang vocal that repeats, “It’s impossible.” But halfway through the track, it becomes a completely different song that abandons that hook, structured almost like a suite, yet a far cry from a “Happiness is a Warm Gun,” “Suite: Judy Blues” or “Bohemian Rhapsody.”

A little more focused songwriting and grittier, more soulful vocals will make Yorkshire Tenth’s next effort even better. However, I know from having seen them several times that the band’s enthusiasm makes for a great show, which will be the case when they celebrate the release of New Again on March 8 at Mill Hill Basement in Trenton with Scoville and Ultra Major.