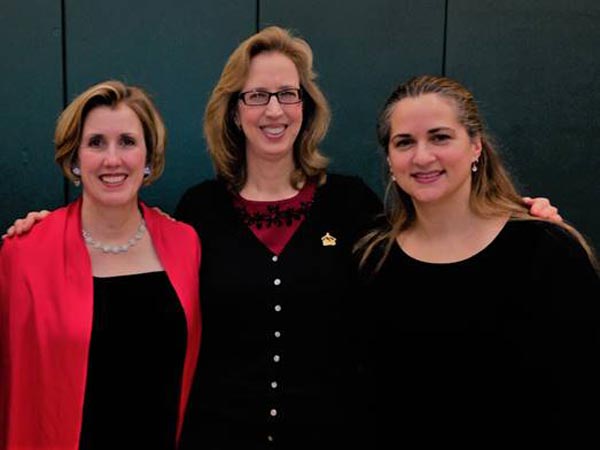 (BERKELEY HEIGHTS, NJ) -- Wharton Institute for the Performing Arts (WIPA) continues its Salon Series with an Evening of Holiday Music featuring Musicale Amice on Thursday, December 6 at 7:30pm at 60 Locust Avenue in Berkeley Heights. Wine, cheese, and hot cocoa will be served and the concert will end with a festive sing-along. Tickets are $12 for adults, $6 for seniors, and free for Wharton Institute for the Performing Arts students. Tickets are available at the door or by calling 908-790-0700.

Soprano Jamie Baer Peterson, pianist Lois Buesser, and cellist Sariah Johnson formed the trio Musicale Amice in 2013 and have appeared throughout the Garden State at churches, libraries, and senior living centers as well as the Madison Thursday Morning Club, American Association of University Women (AAUW), and the Suburban Music Club. Experience the magic of the season as they perform music of The Piano Guys and original arrangements of classical holiday carols from around the world, including Sleigh Ride, White Christmas, Christmas Time is Here, O Holy Night, Gesu Bambino, A Welsh Lullabye, and the spiritual Rise Up Shepherd.

Soprano Jamie Baer Peterson is a native of Minnesota and received her training at the Eastman School of Music. She began her opera career as an apprentice with the Lyric Opera of Chicago which led to performances throughout the United States, Canada, and France in leading roles with L'Opera de Nice, Santa Fe Opera, and the New York City Opera, among other regional companies. On the concert stage, she has appeared with the symphonies of Dallas, Atlanta, Hartford, Omaha, Princeton, and Westfield as well as choral societies in New York City, New Jersey, and Pennsylvania and in two national broadcasts with the Mormon Tabernacle Choir.  Peterson has taught at SUNY-Fredonia and Monmouth University and is currently on the faculty of the Wharton Institute for the Performing Arts.

Originally from Oklahoma, pianist Lois Buesser has performed as a soloist, accompanist, singer, and club band keyboardist.  She has sung in chamber choruses, entertained troops with the USO\DOD in Europe and Asia, and acted as music director for area theatres and schools. Buesser bi-annually performs "Lois Buesser's Musical Extravaganza” at St Mark's Episcopal Church in Basking Ridge where she is the organist. She directs the Humdingers, a women's touring troupe in the Montclair area. Buesser is the Music Director at Light Opera of New Jersey and on the music faculty of William Paterson University.

Sariah Mourik Johnson was raised in Germany and began her cello studies at a young age in Frankfurt. She immigrated to the United States at the age of 20 and graduated with a Master of Music degree in Cello Performance and Pedagogy from Brigham Young University. Johnson is an avid chamber player in Chicago, New York City, and New Jersey. She is a former member of the Jupiter Symphony and currently performs with the Light Opera of New Jersey, the Baroque Orchestra of New Jersey, and the PEL Trio and enjoys playing on her Bohemian cello built in the mid-1800s in Markneukirchen.