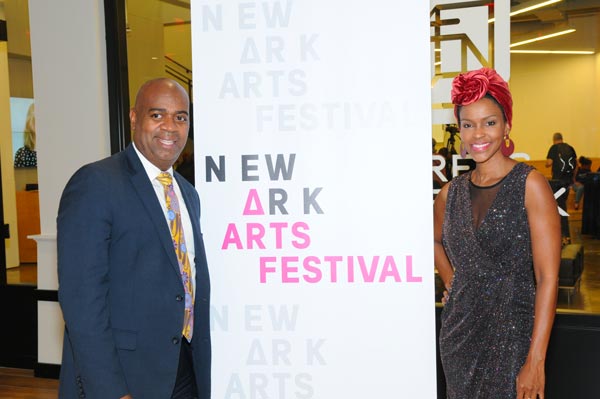 (NEWARK, NJ) -- This year, the Newark Arts Festival launched a new brand and debuted dynamic programming to 10,000 attendees and participants, as it transitioned from the former Open Doors Citywide Arts Festival. Over a four-day span from Thursday, October 4th, through Sunday, October 7th, in all five wards, Newark Arts celebrated its 17th annual showcase of the best in visual and performing arts, spotlighting Newark’s rich landscape of museums, galleries and pop-up venues.

Proudly dubbed ‘The Arts Mayor’, Mayor Ras J. Baraka kicked off the festival with a rousing speech at Express Newark in the Hahne & Co. Building. “We have art everywhere; they have never seen a city with this much art. We ultimately tie art to the economic growth, to the social fabric of the city, intellectual growth, development of its young people, and to the sustaining of its families...art is at the center of all of that!” said Mayor Baraka to a room over 150 guests.

With the sponsorship of L&M Development, Newark Arts converted raw spaces in the historic Hahne’s Building into several pop-up galleries that were activated on opening night. In total, Newark Arts partnered with over 80 venues and 500 participating artists. Many artists, curators and venues reported multiple sales and a large number of visitors to their exhibits.

The festival provided attendees with a number of fresh ways to participate including the M&T Bank Murals + Martinis Public Art Tour, which took riders on a tour of new and popular commissioned walls and structures, and Open Doors Kids, a mini-festival of the arts just for child art enthusiasts. Guided walking tours were offered through Have You Met Newark and Brown Girls Bar Crawl, giving a more up close and personal interaction with some of Downtown Newark’s art exhibits.