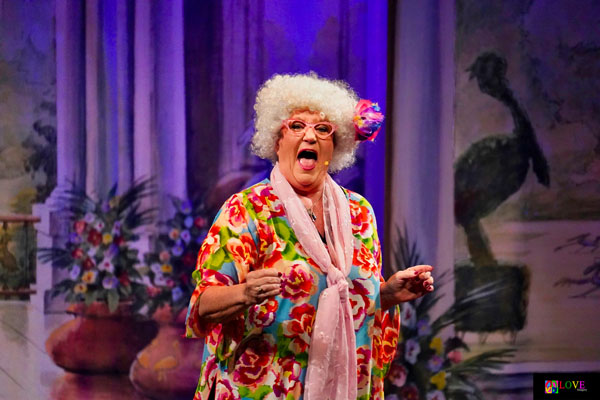 The crowd is making it’s way inside Toms River, NJ’s Grunin Center of the Arts on this beautiful Saturday, Sept. 22, 2018 afternoon for the first of two sold-out performances of Assisted Living: The Musical!

The 75-minute vaudeville-esqe review is the brainchild of Rick Compton and Betsy Bennett, who say the inspiration for their musical happened in a parking lot on a warm, South Florida night in 2008 when a follower asked them what the topic of their next show might be. Although at the moment, they had no idea, Compton saw someone loading a walker and said, “Maybe something on assisted living?” At this point, Bennett elbowed him and said, “Yeah, right — Assisted Living: The Musical!” 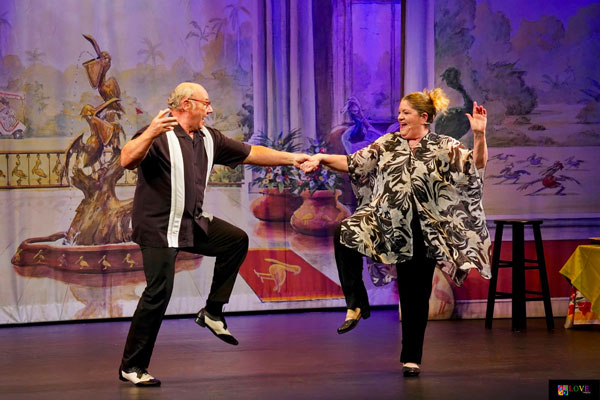 Six months later, the show was born! Since then, Compton and Bennett have performed the musical to audiences around the country and Assisted Livinghas also been independently produced by theater companies in states as diverse as New York, Texas, Indiana, Iowa, and Florida.

Bennett and Compton have been writing and performing together since 1995, making a name for themselves creating social and political satire in and around the Naples, Florida area.

Bennett started professionally in summer stock when she was 15. She has a theatre degree from Albion College, which she followed up with an internship at Playwrights Horizons in New York City. 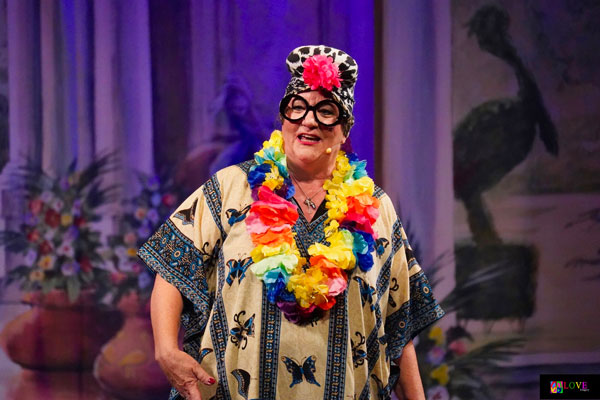 She co-founded Arcane Theatriks, a professional company in Chicago, and she is also a Dramatists Guild member who has performed in more than 90 theatrical productions.

Since leaving the corporate world in 1988, Rick Compton founded a small chain of annual street painting festivals, toured Japan as a keyboardist for The Platters, and even authored a children’s book called The Essential Street Painter. 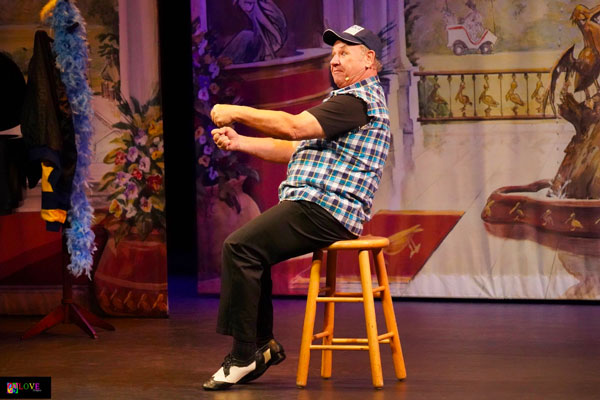 He’s won several regional awards for magazine articles and is a member of The Dramatists Guild. In addition, Compton has worked as a pit musician playing keyboards and synthesizer, and has served as a musical director for a variety of musical theater productions.

As we enter the Grunin Center auditorium for this afternoon’s sold-out show, we notice that the audience for today’s performance of Assisted Living is comprised mainly of senior citizens. Although many have arrived on their own today, some have come as a part of a group from one of the many local senior citizen communities located in Toms River or in one of the surrounding areas.

While we wait for the show to begin, we take a moment to chat with Meagan from Lakewood who works as an activities director at a local senior community and arranges bus trips for groups of residents to performances like today’s.

Says Meagan, “The Grunin Center is a phenomenal venue for senior citizen groups to come see live performances. Last season, I brought a group of people to see Neil Berg’s 100 Years of Broadway and we were just blown away by the talent — it moved us to tears! Likewise, Assisted Living is another perfect show for seniors — not only because of the subject matter, but because it’s also offered as a matinee performance.”

Adding, “The Grunin Center is a great location where every seat has a good view,” Meagan concludes by noting, “And the staff is great here, too — they helped us every step of the way from purchasing group tickets to helping all of our seniors find our seats once we arrived.”

The lights dim, but before the show begins, the audience is welcomed by Keri Britske from the Toms River Family Health and Support Coalition.

Britske is here to make audience members aware of a potential solution to the growing issue of senior isolation. As such, she invites members of the crowd to attend an upcoming Senior Isolation Solutions Meeting, which will be held on Wed. Nov. 7, 2018 in the Bishop building of the Ocean County Library in Toms River from 12–2 pm.

Assisted Living: The Musical! opens with the show’s host couple — played by Compton and Bennett — entering heaven, suspecting their son has “pulled their plugs” to get his hands on Dad’s vintage Corvette.

Here, in heaven, the couple fondly remembers their golden years at Pelican Roost, an active, full-service retirement community, and the kooky cast of characters they encountered there.

In the musical, Compton and Bennett portray a parade of 18 different characters who sing and dance their way through the show.

Songs include “Help! I’ve Fallen (For You) and I Can’t Get Up!” “The Lost-My-Dentures-On-Steak-Night Blues,” and “Going Mobile,” a ’50s style doo-wop number about walkers in which the couple croons, “Caressing our handrails and sliding our balls to get around/We won’t fall down.” 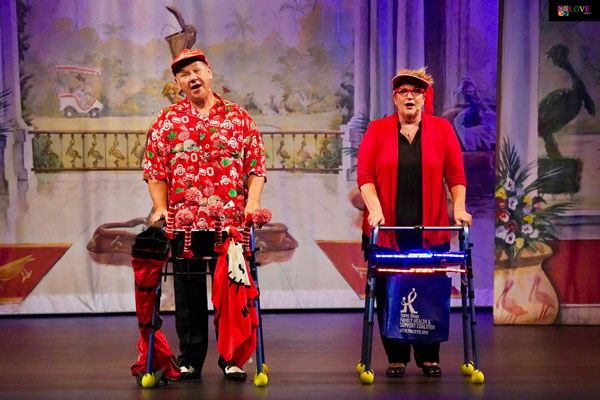 One recurring character in the show is Naomi Lipshitz-Yamamoto-Murphy, who regularly updates the audience on her living arrangements as an unintended consequence of spousal mortality. 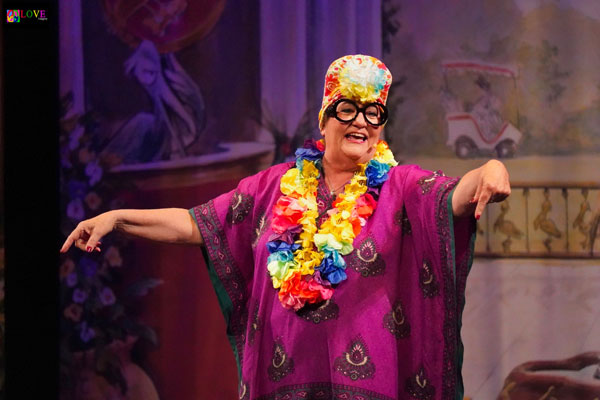 Other characters include a shifty lawyer with a catchy phone number that the audience can all recite (“1–800-LAWYERZ”), a nurse at the wellness center who wants to encourage organ donation, and a comedian from the Catskills complete with kitchy jokes and cigar. 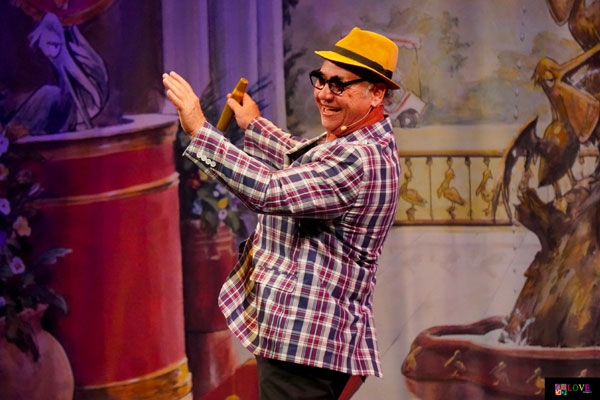 The high point of the show is Compton and Bennett’s performance of “The Uplifting Viagra Medley” in which the actors sing the praises of the wonder drug via a parody of well-known songs including “The Lion Sleeps Tonight,” “Volare,” “They Call the Wind Mariah,” and “Up, Up and Away,” (“with his beautiful, his beautiful, blue pill”).

As audience members make their way out of the auditorium and into the Grunin Center lobby, we chat with several in attendance today who share their thoughts with us about today’s presentation.

Comments Barbara from Lakewood, “Assisted Living was terrific! If you’re a person who can laugh at yourself, you’re gonna love it!”

Cherie from Brick remarks, “Assisted Living: The Musical! was hysterical — it was the same as our adult community!”

Cherie’s friend, Susan from Brick, agrees calling it, “Right on the money!”

And, finally, Len from Jackson comments, “They took a subject that all of the people here are living with and made it very funny!” 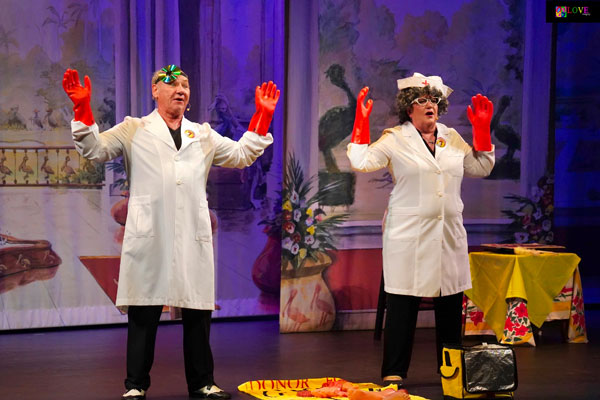 We also get a chance to chat with the creators and performers of Assisted Living: The Musical! — Rick Compton and Betsy Bennett.

States Compton, “We perform this show all over the country, but this is our first time playing in New Jersey. We love the Northeast culture — even though we’re from the Midwest and perform a lot in Florida,” before stating, “New Jersey has a cultured edge. They get all the jokes here!”

Bennett notes, “This show has no sad songs, no f-bombs, and no Depends jokes! We want to make people realize that people don’t change just because they age.”

Compton concurs, before concluding, “Aging is no more about infirmary, poverty, and decline than youth is about hangovers. Even though our show is filled with satire, it’s one we created with love. That’s why we hope everyone — no matter their age — can come and have a good time enjoying Assisted Living: The Musical!” 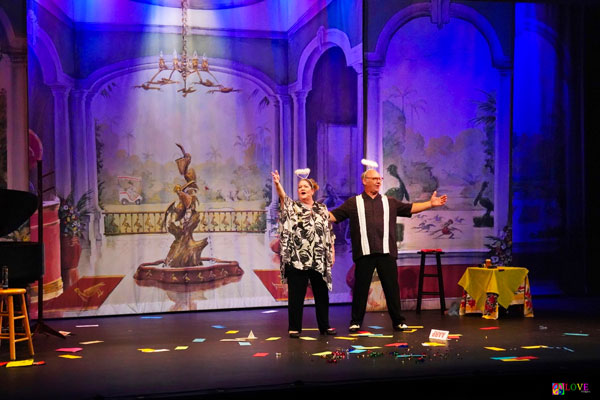 To learn more about Assisted Living: The Musical, please go to assistedlivingthemusical.com. For information on upcoming performances at Ocean County College’s Grunin Center of the Arts — including Yesterday: A Tribute to The Beatles on Oct. 12 and Broadway’s Mandy Gonzalez on November 2 — please click on grunincenter.org. To find out more about the Senior Isolation Solutions Meeting scheduled for Wed. Nov. 7 from 12–2 pm in the Bishop building of the Ocean County Library in Toms River, please call 732–505–2273 or email info@caregivervolunteers.org.