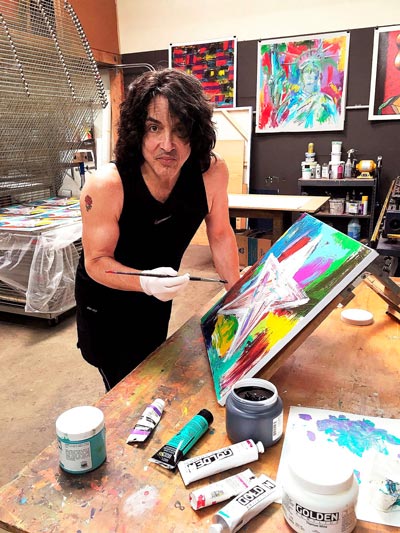 (ATLANTIC CITY, NJ) -- You wanted the best, you got the best! The hottest painter in the world….Paul Stanley from KISS! That’s right! The legendary front man from one of the most iconic rock bands of our time, KISS, is coming to the Wentworth Gallery located inside of the Hard Rock Hotel & Casino Atlantic City on Saturday, October 13 at 6:00pm with his fine art collection, which has been on display at the gallery since the property’s opening in June 2018. Collectors will have a once-in-a-lifetime experience including an intimate one on one meeting Paul. Top collectors will even have dinner with Paul after the show.

For more than thirty years, Paul Stanley has reigned supreme as one of the single-most recognizable front men in the history of rock and roll. Although preferring to live his off-stage life out of the limelight, he continues to be the chief songwriter, driving force and the unwavering voice of KISS. A visionary and trendsetter since the early 1970s, Stanley's passion for both the musical and visual arts has perhaps been the key to the astonishing ongoing worldwide phenomenon known as KISS.

Stanley single-handedly penned such anthems as "Love Gun", "God Of Thunder" and "Black Diamond,” as well as, having the golden throat that throttled "Detroit Rock City," the charismatic swagger behind "I Was Made For Lovin' You," and was the unmasked troubadour that breathed vocal life into the ballads "Reason to Live," "Forever" and "Every Time I Look At You."

Stanley designed and created the iconic KISS logo which 40 years on remains universally recognized as one of the greatest logos of the 20th century. His artistic and visual input has been and continues to be seen in his designs of KISS album covers, stages and apparel.

Stanley also returned to his passion for painting twenty years ago by creating portraits and abstracts that are emotionally charged compositions. His tremendous success has translated into millions in sales. He aims to maximize the direct, physical impact of his paintings through scale, texture, color and simplicity of images. In a few short years of exhibiting, Stanley's works have been acquired by numerous art collectors and he will be celebrated with a retrospective museum show in 2020.

Paul Stanley will appear alongside his artwork collection at Wentworth Gallery in Hard Rock Hotel & Casino on Saturday, October 13 from 6:00pm until 9:00pm. Avoid the line and reserve your art in advance. Call (609) 300-5095 for details and to preview. Pre-purchase is required for admittance.