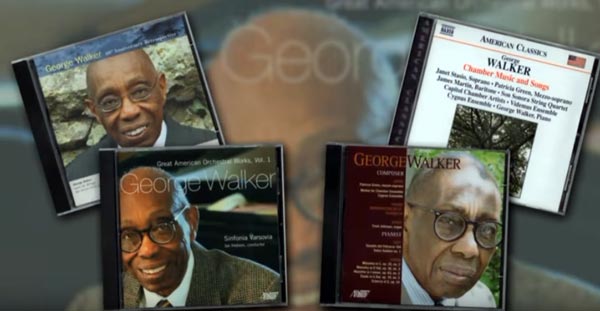 (NEWARK, NJ) -- The Institute of Jazz Studies (IJS) joins the rest of the Rutgers University–Newark community and music fans around the world in mourning the loss and celebrating the life and accomplishments of former faculty member and internationally esteemed classical music composer George Walker who died on August 23 at the age of 96 in Montclair. He was a barrier breaker as the first African-American composer to win a Pulitzer Prize and inspired generations of new voices over a career of 23 years at Rutgers-Newark.

Walker was a former chairman of the music department at Rutgers University.  His career was full of ground breaking achievements. He was the first black graduate of the Curtis Institute of Music in Philadelphia and became the first black instrumentalist to perform with the Philadelphia Orchestra. He also became the first African American to receive a doctorate from the University of Rochester’s Eastman School of Music. In 1996, he became the first African American to win the Pulitzer Prize for music, receiving it “Lilacs,” a song cycle set to stanzas from Walt Whitman’s poem “When Lilacs Last in the Dooryard Bloom’d.”

“Before my affiliation with the Institute of Jazz Studies, I was employed as a work-study student in the Music Department during the time that Dr. Walker was chair. While he made it clear that jazz was not his forte, he did express admiration for some of the music’s innovators and, as a favor to me, he sight-read the sheet music to In a Mist, an early attempt at melding jazz and classical music, written by jazz trumpeter Bix Beiderbecke. After a near perfect reading, he was very complimentary of the piece,” said Vincent Pelote, IJS Director of Operations.

Walker taught at Rutgers from 1969 until his retirement in 1992 as Professor Emeritus. He was the recipient of two Guggenheim Fellowships and two Rockefeller Foundation Fellowships, several MacDowell Colony and Yaddo Fellowships, five National Endowment for the Arts Awards, research grants from Smith College, the University of Colorado and Rutgers University. He won the Harvey Gaul Prize in 1963. Other awards were received from the Curtis Institute of Music (New York Town Hall Recital), the American Academy and Institute of Arts and Letters, Lafayette College and Oberlin College (Honorary Doctorates), and the Koussevitsky Foundation.

The Rutgers Institute of Jazz Studies is located at 185 University Avenue in Newark, New Jersey.