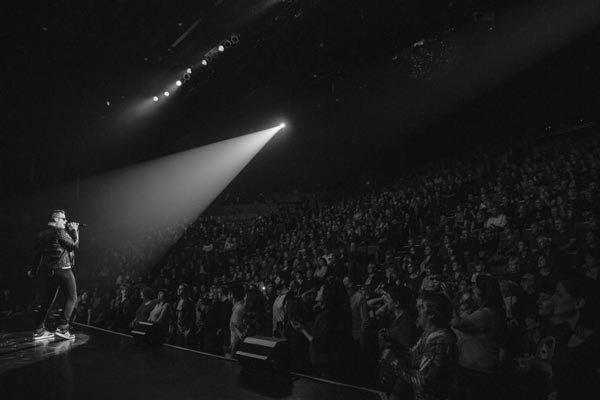 Queen — the superstar band which brilliantly fused classical and rock music — topped the music charts in the 1970s and ‘80s with hits like “We Are the Champions,” “We Will Rock You,” “Another One Bites the Dust,” and “Crazy Little Thing Called Love.” Led by frontman Freddie Mercury, the group — which also included guitarist Brian May and drummer Roger Taylor — went on to become one of the world’s most popular bands selling hundreds of millions of records, being inducted into the Rock and Roll Hall of Fame, and earning a prestigious Grammy Lifetime Achievement Award.

Following Freddie Mercury’s passing, Brian May and Roger Taylor created an official Queen tribute band — The Queen Extravaganza — and after holding a worldwide video competition, they hand-selected a talented young singer to take the place of Freddie Mercury.

A musician from Montreal, Canada, Martel had spent the past dozen or so years touring with his contemporary Christian band, Downhere. With the encouragement of friends and family members, he submitted a video of himself singing “Somebody to Love.” His audition not only earned him the job in the Queen Extravaganza tribute — it also made him a YouTube sensation, got him invited to appear on The Ellen DeGeneres Show, and was ultimately seen by over 14 million people!

After performing with May and Taylor in The Queen Extravaganza, Martel created his own Queen tribute band — The Ultimate Queen Celebration — a group that will perform LIVE! At Ocean Grove, NJ’s Great Auditorium on Saturday, July 14, 2018 at 8pm.

Unlike other tribute artists, Martel’s Ultimate Queen Celebration band doesn’t try to replicate the look of the original group. Instead, Martel and his musicians concentrate on carefully recreating the sound, energy, and excitement that Freddie Mercury and Queen brought to auditoriums and ampitheatres around the world. During their upcoming Great Auditorium performance, audience members can expect to hear Martel’s Mercury-like renditions of “Radio Gaga,” “Killer Queen,” “Tie Your Mother Down,” “Fat Bottomed Girls,” “Bohemian Rhapsody,” and many more. At this historic venue, they will not only learn how much Martel sounds like Mercury, but that he also embodies the heart-and-soul that Freddie poured into every song he ever performed.

Spotlight Central recently had a chance to interview Marc Martel, who took time off from working on a pair of Queen recording projects to chat with us about his childhood, his work as a contemporary Christian artist, and his experience performing the music of Freddie Mercury and Queen all over the globe.

Spotlight Central: As a child growing up in Montreal, how did you first get involved in music?

Marc Martel: That would have been from the earliest days of just being a kid with musical parents. My mom is the piano player in my dad’s church — she’s also the choir director — and she’s just a musician through and through. I remember, as a really young child, at probably the age of four or five, that she would play the piano to put us kids to sleep. So she’d play Beethoven and stuff like that — “Moonlight Sonata,” for example — and when she’d play it, I can remember analyzing the notes in my head.

You see, I’d started playing piano at the age of five. And I remember hearing her play the piano, and I could tell the difference between the sound that she was able to make, as compared to what I was able to make. I remember thinking, “Why does the low end of the piano sound so full for her?” and I soon discovered it was because her hands were big enough to make an octave.

And, so, I remember, as a kid, just having this penchant for analyzing music in my head. I always loved music — it was always in the house — and my younger brother is musical, too. Plus I always had a stage — at church, for instance — where I could practice my performing chops.

Spotlight Central: And what were some of your favorite types of music to listen to as a youngster?

Marc Martel: I grew up on a lot of gospel music. The first artist I really fell in love with was a guy named Keith Green, who was a really fiery piano player, singer, and songwriter. He died in the early ’80s in a tragic plane crash at the age of 28. His music left a big mark on me because he was so full of energy, and the way he played the piano — he just tore it up; he lit it on fire! So I ate up his music as a budding player and I learned all of his music by ear.

And then I got into a lot of Top 40 stuff — I didn’t listen to rock and roll, honestly! I was born in ’76, but I didn’t get into rock until the early ’90s when the grunge stuff started coming out. So in the ’80s, I was into a lot of softer rock like George Michael and Richard Marx, aside from the gospel music.

Spotlight Central: Did you play in any bands as a teenager?

Marc Martel: No. Bands were something that were really foreign to me. I was on my own doing music. Aside from being in the high school concert band and stuff like that, the rock band thing didn’t start until college.

And, so, that musician and I really hit it off. We became best friends and started a band in college. I had never been in a band before and realized that it was really fun to play music with other people [laughs] and ever since, I’ve, sort of, been a band guy!

Spotlight Central: And, of course, the group you’re talking about is your band, Downhere.

Spotlight Central: And you guys started that band when you were in college in Saskatchewan, but you eventually moved to Nashville, where the group achieved international success with all sorts of recordings and awards. Do you still enjoy creating and performing Christian music today?

Marc Martel: Yeah, I do — especially around Christmastime, when you can give yourself the freedom to talk about the Christmas story. I don’t do so much non-Christmas Christian music these days because doing Queen takes up a lot of my time — it has actually taken up what would be writing time for me — but I am doing a lot of recording this year, including a Queen EP and a Queen Christmas EP, which people will be able to hear in the near future.

Spotlight Central: Tell us a little about the year 2011 when you auditioned to go on the official Queen tribute tour — The Queen Extravaganza Live Tour — and you became a YouTube sensation. What was all that like?

Marc Martel: It was pretty nuts! It was one of those things that doesn’t really happen to people very often — something that you literally fantasize about that literally comes true.

People would compare me to Freddie Mercury incessantly. It just became this joke after awhile: “I wonder how many people are gonna tell me I sound like Freddie Mercury after this show?” Usually, it was at least five people who would come up to me and say, “Do you know who you remind me of?” And I’d say, “Yeah, I know exactly who I remind you of!”

So I started thinking, “I don’t know that it’s a particularly unique ability to sound like Freddie Mercury — there are lots of tenor rock singers in the world who I think have a similar sound — but maybe I have that little bit more that gives the music that uncanny feeling?”

And so this friend of mine in Nashville got wind of an audition contest that Roger Taylor of Queen was putting together, and he forwarded the information about it to me. And as soon as I went to the website, I was thinking to myself, “There’s a good chance I could win this — I mean, if what thousands of people have told me over the past ten years is true, I don’t know how I’m not gonna win this!”

And, sure enough, after I uploaded my audition video the next day, my life went haywire for about a month or two.

Spotlight Central: And, today, you’re still doing Queen’s music in your own Ultimate Queen Celebration concerts! Do you have a specific Queen song or songs that you especially enjoy performing?

Marc Martel: Yeah. I mean, I have to say “Bohemian Rhapsody” — it’s hard to get away from that one. And “Under Pressure” is always a favorite. Also, “Love of My Life” is a nice moment — especially when doing it live because it’s so stark and beautiful. And, actually, I love “Who Wants to Live Forever” because I’m doing a lot of symphony work lately and that’s always a highlight of those shows — it’s just a beautiful piece.

Spotlight Central: So what can concertgoers expect to see and hear at your upcoming July 14 Ultimate Queen Celebration Concert at The Great Auditorium in Ocean Grove, NJ?

Marc Martel: Well, pretty much everything you’d expect from a Queen concert, except for the dressing up. It’s high energy — a lot of fun — and people say we sound more like Queen than Queen does, so if that’s what you’re after — an authentic Queen sound with lots of energy and a great-looking show with all the emotional ups and downs — it’s all there. We have a lot of fun playing this music, people sing along with us all night long, and everyone has a great time!

The Ultimate Queen Celebration starring Marc Martell will appear at The Great Auditorium in Ocean Grove, NJ on July 14, 2018 at 8pm. Ticket options for the show include $60 VIP tickets with a meet-and-greet with the band and an autographed photo; reserved seating for $30 and $50; and at-the-door general admission for $20. The Great Auditorium is located at Pilgrim and Ocean Pathways in Ocean Grove, New Jersey. All facilities are handicapped accessible. For reservations: phone 800–590–4064 or go online to www.oceangrove.org.