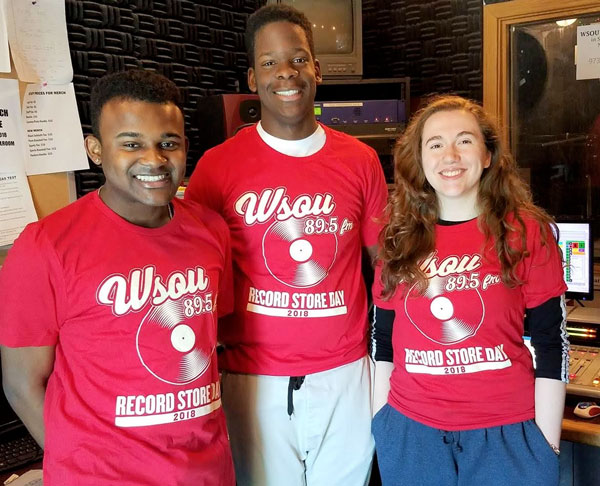 (SOUTH ORANGE, NJ) -- As part of its participation in this year’s Record Store Day and college radio’s “Vinylthon,” Seton Hall University’s WSOU has produced a limited edition T-shirt available only on April 21, 2018.  The station will be giving away on-air T-shirts to listeners, as well as during the station’s live remote Saturday from Vintage Vinyl Records in Fords, N.J.  The legendary loud rock station will also be playing vinyl records on air, including tracks by Mastodon, Life of Agony, Motionless In White, and Metallica.

“We’ve discovered over the years that our listeners believe in supporting the remaining record stores in New York and New Jersey,” said station manager Alicia Campos.  “Our special Record Store Day T-shirt giveaway is a way WSOU can thank its listeners for not only tuning in to 89.5 FM, but also for helping independent record stores survive.”

Record Store Day, now in its 11th year, is an annual international event that celebrates and raises awareness about independent record stores and the unique cultures they nurture and support in their local communities.  Launched by the College Radio Foundation in 2016, Vinylthon coincidences with Record Store Day as an opportunity for college radio stations to champion the unique music format of vinyl.  More information about both can be found at www.recordstoreday.com and www.collegeradio.org/vinylthon.

WSOU, which began broadcasting in 1948, is the student-run radio station of Seton Hall University.  Celebrated for its loud rock format and coverage of Seton Hall athletics, WSOU’s signal reaches all five boroughs of New York City, much of northern and central New Jersey, and is available on iHeartRadio. WSOU was the 2016 winner of the National Broadcasters Association’s Marconi Award for Noncommercial Station of the Year.  More information about the station can be found online at www.wsou.net and www.facebook.com/WSOUFM.