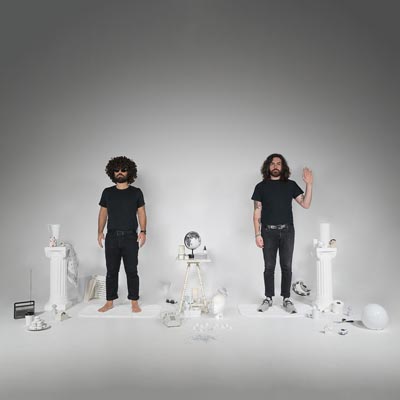 Asbury two-piece Yawn Mower return with “Could Eat, Would Sleep,” their fourth EP since 2016, which they’ll celebrate with a 420 show at The Saint.

If the listeners of Yawn Mower have half as much fun as the band seem to have had making their fourth EP since 2016, they’re in for a really good time, especially with the opening “Local Summer.” As laser-sharp lyrically as ever, the popular Asbury Park two-piece have dulled their musical edge this time out. On the Seussically-entitled Could Eat, Would Sleep, they are, for the most part, a drum-and-bass duo, with Mike Chick playing nice chunky rhythms on guitar and a pickup bass line, but no distinctive leads throughout the five-song collection. This is surprising because he can smoke live, and the record was produced by Asbury rock guitar god Paul Ritchie of Parlor Mob and gods.

However, the thick, heavy rhythmic approach is perfectly suited to the all-too-brief Sabbath-like “Shouted Poem.” And the Latin Rhythms on the second half of “The Woods” — an exercise in chopping through the obstacles and absurdities of life — are delicious with sweet jazzy guitar and drummer Biff Swenson’s tasty use of vibraslap and claves. Also, Gringo Motel saxophonist Mark Gallagher mixes things up nicely with a hot solo on “Local Summer.”

The edge is more in Chick’s lyrics, which are as spot-on as ever, recalling the wit of The Front Bottoms, especially on “Local Summer,” my favorite track. The song is a salute to when in mid-September, sometimes even into early October, after the bennies have gone away, the locals have all the fun while the beach is still warm. The verses are about the carefree vibe of local summer and locals’ excitement of also getting their bar and restaurants back from summer tourists, while not having to fight for a space on the beach. But the chorus sadly and strangely recalls last season when there were a bunch of drownings and deaths at that time that put a damper on Asbury’s local summer vibe for Chick and others. A forlorn final verse is a tribute to the people who passed away.

Also sharp on the lyrical tip is “Operators (Are Standing By),” a tale of loneliness and isolation with great verses: “Today’s the day I’m leavin’ town. Feeling so low that I could lick the ground. Found a box in a treasure chest — half a sandwich and a wizard map. No coins, no snacks, no notes from Mom.” And “The food is rotten. The wires are fried. True love itself won’t keep us alive. Spine popped the beachball. We were all amused. Is it a cracked foundation or a blown-out fuse?”

Closing Could Eat, Would Sleep is “Kickstand,” a reluctant anthem about how friends are needed to get through the insanity of life, kind of like a Millennial indie-rock, doom-pop take on Bill Withers’ “Lean on Me,” but when they don’t or do the opposite, “it’s like a bike without a kickstand.” I love this verse: “Let’s hope the world spins right off the axis of this cruel joke, but in the meantime, we might as well do our best to do our best.”

If Yawn Mower do their best on April 20 at their record release party at The Saint, you will be very entertained. Joining in the 420 celebration will be Sink Tapes, Darkwing, and Looms.