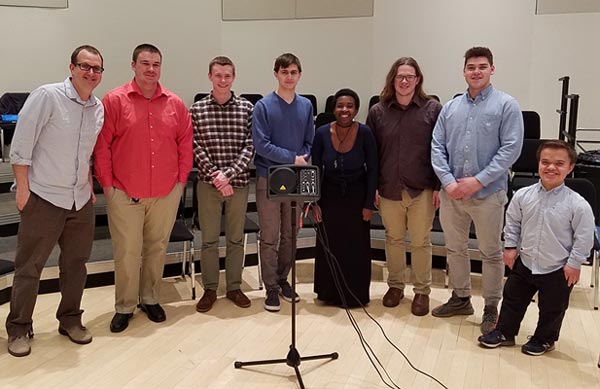 (NEW BRUNSWICK, NJ) -- The newly formed Rutgers Interactive Music Ensemble (RIME), directed by Mason Gross professor Steven Kemper of Highland Park, will perform its first solo concert on Monday, April 9, 2018, at 7:30pm in the Mabel Smith Douglass Room in Douglass and Laurie Library, 8 Chapel Drive on the Douglass Campus. The concert is free and open to the public; no tickets are required.

“I started RIME to help students develop proficiency performing with a wide range of technologies, as well as to express their musicality through the combination of traditional instruments and cutting-edge performance technology,” Kemper says. “I also wanted to familiarize them with new types of ensemble music being created specifically for technology-oriented ensembles.”

This concert will feature established pieces for laptop ensemble by Joo Won Park and Kristina Warren, as well as guided improvisations that combine acoustic instruments with computer-generated sound by Mark Phillips and by the members of RIME. Additionally, RIME will premiere Fractured Imagination for laptop quartet by ensemble member and BM in Composition student John Boracci. The concert will also present After | Apple Box by Associate Professor of Music at Stony Brook University Margaret Anne Schedel, which was written in honor of her father, Charles Woodis Schedel Jr., a Rutgers history major (Class of 1960). In this piece the ensemble plays ammunition boxes that Schedel found cleaning out the attic of her childhood home after her father’s death in 2017. These boxes have been converted to electroacoustic instruments using piezoelectric pickups and machine learning techniques.

Founded in 1976, Mason Gross School of the Arts is the flagship public arts conservatory of New Jersey and is part of Rutgers, The State University of New Jersey, a leading Big Ten public research university serving more than 65,000 students, the nation’s eighth-oldest institution of higher learning, and a member of the prestigious Association of American Universities. The school is home to the departments of Dance, Music, Theater, and Visual Arts as well as the Brodsky Center, Mason Gross Extension Division, Rutgers Arts Online, and the Rutgers Filmmaking Center. Faculty and alumni rosters feature arts professionals recognized nationally and internationally, including Mike Colter, Calista Flockhart, Sebastian Stan, Cleo Mack, William Pope.L, Alice Aycock, Sean Jones, and Cristina Pato. The school has an enrollment of 802 undergraduates and 329 graduate students across five disciplines, combined with a faculty of approximately 260. The community of student artists at Mason Gross hails from 40 states and territories and 20 countries. Mason Gross is one of the most selective schools at Rutgers–New Brunswick, ensuring students the opportunity to work closely with accomplished artists in their fields.

Established in 1766, Rutgers, The State University of New Jersey, is America’s eighth oldest institution of higher learning and one of the nation’s premier public research universities. Serving more than 65,000 students on campuses, centers, institutes and other locations throughout the state, Rutgers is the only public university in New Jersey that is a member of the prestigious Association of American Universities.