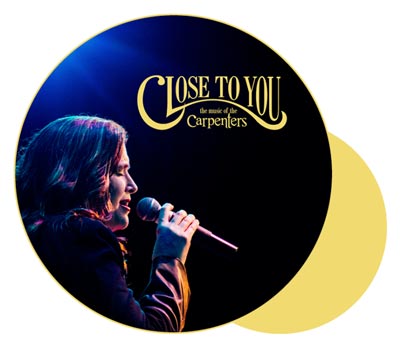 (UNION, NJ) -- Give your sweetheart an early Valentine’s Day gift and enjoy the soft-rock, uplifting music of The Carpenters as vocalist Lisa Rock performs Close to You: The Music of the Carpenters at Kean Stage on Sunday, February 11 at 3:00pm.

The Carpenters, featuring brother and sister Karen and Richard Carpenter, had a dozen Top 10 hits on the Billboard charts in the 1970s and early 1980s. Rock, who has the same deep, sophisticated, four-octave voice as Karen Carpenter, recreates Carpenter hits such as (They Long To Be) Close to You, Top of the World, We’ve Only Just Begun, Please Mr. Postman and Rainy Days and Mondays.

“I miss her, I love her, and I honor her every time I’m on stage,” said Rock of Karen Carpenter. “What she left behind is relevant and, in hindsight, so poignant.”

Rolling Stone magazine named Karen Carpenter, who died in 1983, one of the greatest female vocalists of all time. Richard Carpenter worked as a composer, arranger and the band’s keyboardist.

“I’ve listened to the Carpenters from childhood,” said Rock. “My parents had every album. I always loved her voice.”

Since graduating from Eastern Michigan University, Rock has spent the last 30 years working as an actor, playwright, singer and music therapist. She has written dozens of cabarets and has performed everything from theater to pop music to opera. She returned to her musical roots and performed a cabaret tribute to Karen Carpenter in Minneapolis in 2010, and it sold out. Since then, Rock and her band have performed The Carpenters’ tribute show more than 200 times.

“It’s been a very amazing ride for me,” she said. “My backup singers and my band are extraordinary, every one of them. Some of them weren’t even alive when this music was out, but they love it. The passion they bring to it is very admirable.”

In addition to her spot-on renditions of the hits, Rock encourages audience participation and tells some interesting facts about The Carpenters. One such story involves songwriters Paul Williams and Roger Nichols, who penned We’ve Only Just Begun in 1968. It was originally written as a bank commercial in an effort to attract young couples and newlyweds to Crocker National Bank in California. When Richard Carpenter heard the song on TV, he inquired as to whether there was a full version, which there was. The Carpenters recorded it and it soared to #2 on the Billboard Hot 100 chart. The record became the second gold single for the pair.

Rock’s vocal range, being so similar to that of Karen Carpenter, allows her to perform these songs in their original key, keeping them more recognizable for the audience.

“When she hits the lower range of her marvelous voice, if you close your eyes, you can see Karen Carpenter’s face,” said Chicago theater writer Alan Bresloff.

“These songs resonate because they really hit you at your soul,” said Rock. “I’ve sung them hundreds of times and I never get tired of them. I’m transported every single time. Karen’s longevity is a testament to her as an artist.”

To honor Karen Carpenter, who died of anorexia, Rock donates a portion of the CD sales at her shows to a local food bank, in Carpenter’s name. “This is our way of giving back and shining a light on what a serious mental health issue anorexia is,” said Rock. “Instead of Karen being remembered for that, we want her to be remembered for her golden voice.”

Close to You: The Music of the Carpenters will take place at 3:00pm on Sunday, February 11 at Enlow Recital Hall, 215 North Ave., Hillside, on Kean University’s East Campus. Tickets are $25 to $35 and are available by calling the box office at 908-737-7469 or visiting www.keanstage.com.