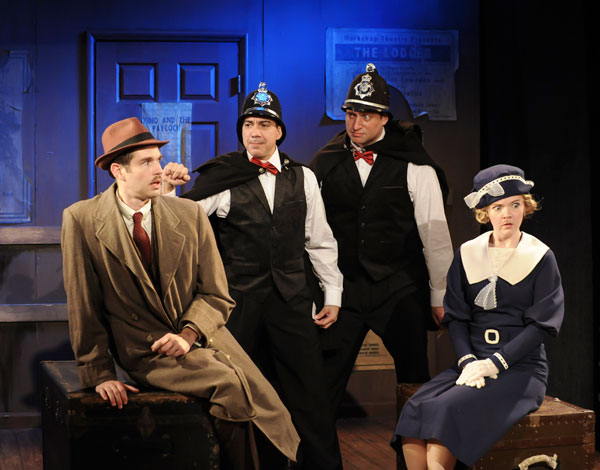 Ingenious.  Captivating.  Hysterical.  Thoroughly entertaining.  Those are just some of the adjectives which describe Mark Shanahan’s production of The 39 Steps playing at Mile Square Theatre in Hoboken.

Ostensibly a thriller, in the hands of these four resourceful actors all but our protagonist Richard Hannay (Joe Delafield) play multiple characters in this adaption of Alfred Hitchcock’s classic 1935 film. The 39 Steps was originally a big, serious, movie about spies between the wars, dashing heroes and classy dames. There was gorgeous black-and-white Scottish and English scenery, and that tingling, suspenseful finale at the London Palladium.

In the hands of this nimble cast under the sterling direction of Mark Shanahan, one’s imagination must recreate the suspense elements like a train roof chase here portrayed gingerly stepping over steamer trunks. 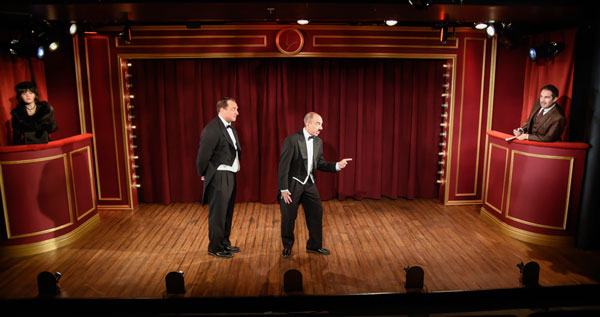 The plot finds Richard Hannay (Joe Delafield), a debonair 37-year-old bachelor in London, bored one evening at the theater alone. A mysterious woman in black, Annabella Schmidt (Alycia Kunkle), fires a gun in the middle of a memory-artist’s act and asks for Richard’s help. Let me hide in your flat, she begs, presumably because he is a debonair 37-year-old bachelor without a date. She regales him about the spies pursuing her and hints at weaponry-related secrets that could threaten Britain’s security. Annabella is murdered in the night, and Richard must go on the run to find the leader of the spy ring and clear himself of any connection with Annabella’s death. Thus, the train and the ensuing chases.  Delafield is an affable lead - he preens, postures, and grows into a credible hero.

Richard encounters an extraordinary number of colorful people most played as Clown No. 1 and Clown No. 2, Zachary Fine and Evan Zes in over 100 roles. Their characters include a milkman, a newsboy, a cleaning woman, a train conductor, theater performers, politicians, secret agents, husband-and-wife Scottish hoteliers, traveling lingerie salesmen and a wide variety of law enforcement officials. Their brilliant quick-change artistry filled with clever costumes (Peter Fogel) and astute props (Emmett Grosland) including hats, clothing, wigs and accents in fractions of a second – sometimes mid-sentence.  Knuckle plays multiple female roles - garnering a German accent (channels Madeline Kahl in Blazing Saddles) and is a pleasant, ernest performance.

Wide eyed Hitchcock fans will enjoy the numerous homage through out the script (Patrick Barlow) including a crop-dusting plane tries to run down our hero. The heroine (Alycia Kunkle) suffering from vertigo. The hotel desk with the sign saying, “Dial M for meal service.”

Shanahan’s assured direction – comes from having played the Hannay role on Broadway and directing the play through out the country.  Mile Square Theatre serves as a perfect location for this ingenious, crafty, irreverent production as the four actors earnestly try to tell the tale. Sit up close to the action and play along with the actors.  It’s high fun, witty, high-energy show that brews breezy holiday spirit and captivates the attention of kids of all ages.

The 39 Steps is on stage now through December 23rd. Mile Square Theatre is located at 1400 Clinton Street in Hoboken, New Jersey. Tickets are available online. 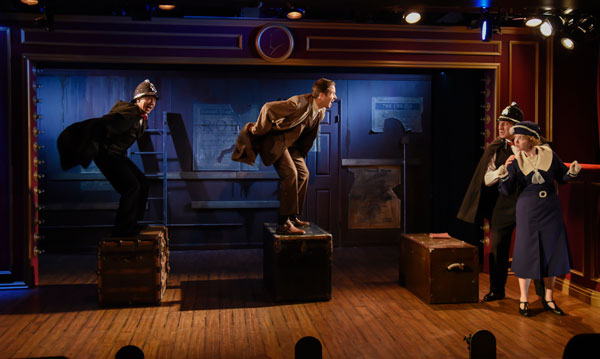