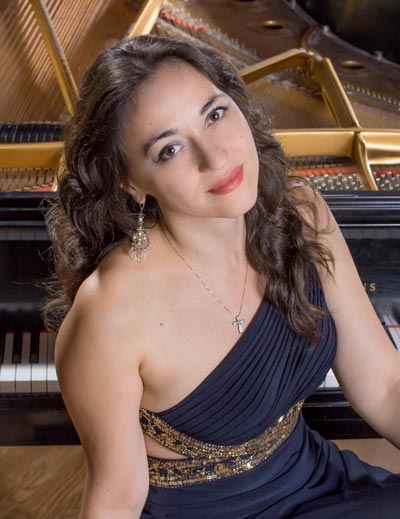 Described as ‘extraordinary’ and ‘larger than life,’ the award-winning Armenian-American pianist Kariné Poghosyan has been praised for her “ability to get to the heart of the works she performs.” Ms. Poghosyan will perform a solo piano recital entitled "Transformations" on Thursday, October 19 at 7:30pm at the Weill Recital Hall at Carnegie Hall. The program was inspired by musical and personal “transformations,” including her own transformation from a music student in Armenia to a mature artist playing at Carnegie Hall. The program, which features transcriptions for solo piano by Beethoven, Liszt, Khachaturian and Stravinsky, opens with Liszt’s virtuosic transcription of Beethoven’s beloved Symphony No. 5.

In Ms. Poghosyan’s words: "Transformations was inspired by a big shift in my own personal journey, during which I came to realize an enormous power locked within me. I feel that a lot of young women go through this transformative experience and arrive at a triumphant moment of self-actualization. All four of the works in the program are examples of transformation; they are compositions for piano that were originally something else – a symphony for a full orchestra, a violin showpiece, and two glorious muchloved ballets.

"Ultimately, these four works also showcase a deeper inner thematic transformation. The Beethoven symphony, with the famous opening theme of fate knocking on the door, is a powerful journey from a dark C minor mood to a triumphant and life-affirming C major conclusion. In the Paganini, a simple tune grows into a grand virtuoso masterpiece. The Adagio from Khachaturian's ballet Spartacus opens with a pure, innocent love duet and expands into a passionate and fervent climax - that incredible moment when a light infatuation deepens into a true loving commitment. And lastly, in Stravinsky's Firebird, the transformation takes place when the heroic prince kills the monstrous villain and breaks the latter's spell to free his beloved princess. With this program, I hope to remind the audience that transformations take on many, diverse and universal forms."

A critic once wrote about Ms. Poghosyan’s passionate playing, "If she had been born a few decades earlier, perhaps the Armenian-American pianist Kariné Poghosyan could have melted the Cold War.” She has been praised for her ability to “get to the heart of the works she performs.”

She made her orchestral debut at fourteen playing Beethoven’s Piano Concerto No. 1, and her solo Carnegie Hall debut at 23. She has since gone on to win numerous awards and perform in some of the world’s most prestigious concert halls. During the 2014-15 season, Ms. Poghosyan made her debuts in Washington D.C. and Toronto, Canada where she performed the Canadian premiere of Alan Hovhaness’s Piano Concerto “Lousadzak.” Other performance highlights included solo recitals in Myra Hess series in Chicago, and in Ehbar Saal in Vienna, as well as performing Khachaturian’s Piano Concerto with the Greater Newburgh (NY) Symphony under the baton of Woomyung Choe. Her most recent orchestral performances include Schumann’s Piano Concerto with Sinfonia Toronto conducted by Maestro Nurhan Arman, and Grieg’s Piano Concerto with the Wallingford Symphony Orchestra, conducted by Maestro Phil Ventre. Both performances received warm ovations and strong reviews. She was also featured on WQXR’s “Chopin Marathon” concert and live webcast, and was interviewed by David Osenberg on his award-winning program on WWFM, Cadenza.

Ms. Poghosyan’s musical studies began in her native Yerevan in Armenia at the School of the Arts No. 1, and continued at Romanos Melikian College and the Komitas State Conservatory. Her teachers in Armenia included Irina Gazarian, Vatche Umr-Shat, and Svetlana Dadyan. After moving to the United States in 1998, she received her BM, summa cum laude, from California State University in Northridge under Françoise Regnat, and her MM and D.M.A. degrees at Manhattan School of Music under Arkady Aronov, completing her D.M.A. in a record-breaking two years with a thesis on Aram Khachaturian’s works for piano. Her recent CD, “Khachaturian Original Piano Works and Ballet Transcriptions,” released on the NAXOS label, has received rave reviews and earned her world-wide acclaim for her exceptional performance and styling. David Dubal the revered piano authority, author and radio host stated about Kariné’s playing of Khachaturian’s music, “She immersed herself in the piano music of Aram Khachaturian to such an extent that her performances have elevated the music to a higher sphere. I know this for certain as I have played many of these pieces and found details of inflection, rhythm, and technical prowess that I had not imagined the music possessed. This is an important debut recording and it brings to us in Kariné Poghosyan’s work, a pianist that we should hear as soon as possible in recital or on disc. Khachaturian would be excited to hear his colorful works played with such idiomatic styling. This is Khachaturian playing that will not be rivaled!"

Kariné Poghosyan is currently based in New York, where she teaches at Manhattan  School of Music.