That’s the truth, but a bit of an understatement, when describing Brandon Ballengée. He’s a scientist – a post-doc fellow at Louisiana State University conducting research on fish and their survival in the aftermath of the 2010 Deepwater Horizon oil spill in the Gulf of Mexico. He’s also an internationally acclaimed artist who’s been featured in The New York Times, the New Yorker, ARTnews, and is represented by Ronald Feldman Fine Arts.

“As a scientist, I have to collect that data and remove myself from that process, to just look at it as numbers,” says Ballengée. “But as a human being and as an artist, I’m allowed to explore the emotional complexity of that situation, and also what it means at this moment in history where there’s a larger story about the loss of so much biodiversity.”

“Sea of Vulnerability,” a mid-career retrospective of Ballengée’s work, is a compelling, beautiful and unsettling exhibition at Rowan University Art Gallery in Glassboro, which opened September 14 and runs through November 5, 2017.

The centerpiece of the exhibition is “Collapse,” consisting of a pyramid of hundreds of large glass jars, each containing a specimen. Ballengée spent days at Rowan University directing the installation of the piece, featuring specimens that were collected from the Gulf of Mexico during his scientific research. Shrimp, skates, stingrays, starfish and many other aquatic life forms are included, some showing stains from oil. Each specimen is suspended in amber or clear liquid, inviting closer inspection.

These hundreds of jars, the artist points out, represent less than 3 percent of the species found in the Gulf. And, there are empty jars. These signify the species that have not been seen in the Gulf of Mexico since 2010, the year when the Deepwater Horizon spill took place. Ballengée is still searching for these missing species as part of his scientific work. He points out that the lingering effects of the oil spill in the Gulf are still being calculated, and that many believe it to be the largest natural disaster ever to take place in the history of the Americas.

The “Sea of Vulnerability” exhibition explores biodiversity on our planet, and the increasing challenges faced by many forms of life. “Malamp Reliquaries” is a series of portraits of amphibians with malformations caused by chemical toxins. Ballengee’s otherworldly photographs aim to honor these small frogs, and the tragedy of their abbreviated existence.

His series called “The Framework of Absence” depicts species known to be extinct. An early example is the Lesser Antillean Macaw, last observed in the 1760s; the most recent is the Eastern Cougar, once native to New Jersey, confirmed extinct in 2013. Each bird, animal, fish or frog is captured by an image made around the time of its extinction, and commemorated in part by a funerary urn, containing ashes that can be ritually spread.

Also on display is “Tropical Cloud Forest Displacement” from Ballengée’s “The Silent Migration” series – a tree covered in orchids and bromeliads represents the native habitat of certain tropical birds. Perched upon the branches, a video plays a film showing how one small bird encounters confusion and resistance as it tries to make its yearly passage south through New York City.

“We’ve lost over 50 percent of wildlife since 1970. We’ve lost probably 43 percent of amphibians since the 1980s – so it’s something that’s happening right now,” observes Ballengée.

However, he refuses to be overwhelmed by the dire statistics. Instead, by showing the beauty of the living creatures and the creative power of their habitats, he hopes his love of nature in all its variety is contagious, and that he motivates people to join him in actively working to preserve it.

“Conservation works,” he says. “All evidence suggests that when we give species the opportunity to just survive, life wants to persist, we just have to let it, and stop behaviors that do the opposite. Our individual actions actually make huge differences for the world.”

The last piece in the exhibition is not in the gallery, but outside of Freedom Prep Charter School in Camden, NJ. Twelve feet high by 15 feet long, “Love Motel for Insects” is an ongoing project by Ballengée using ultra-violet lights on enormous sculpted canvases to attract nocturnal insects. The chemical pheromones arthropods use to attract mates “paint” the giant canvases, creating an opportunity for viewers to see a complex part of nature that is usually invisible, but all around us.

“Contemporary art can be a powerful storyteller, or deliverer of a message, because you start out with image,” Mary Salvante, director of the Rowan University Art Gallery, points out. Because viewers are not being lectured or overwhelmed with scientific data, they decide for themselves how, when or if to engage with the content – such as the environmental facts referenced by Ballengée’s exhibition. However, Salvante continues, powerful visual artworks provide “an experience that [viewers] are going to take with them.” 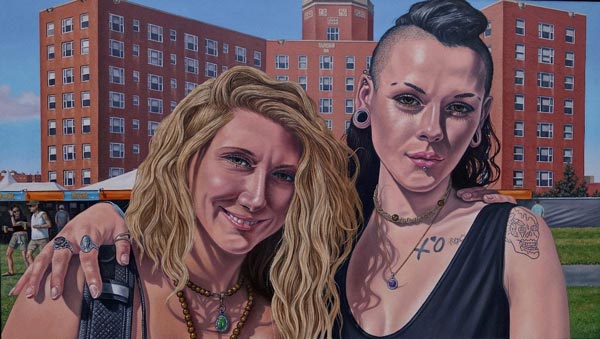 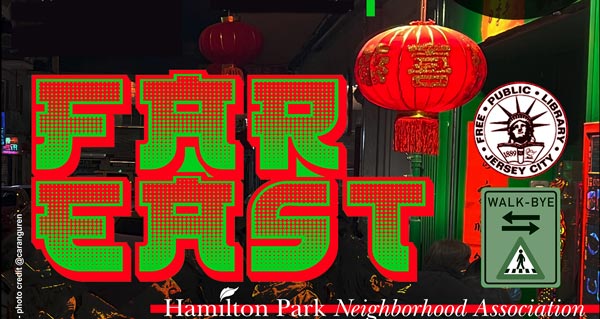