An Interview With John Merjave 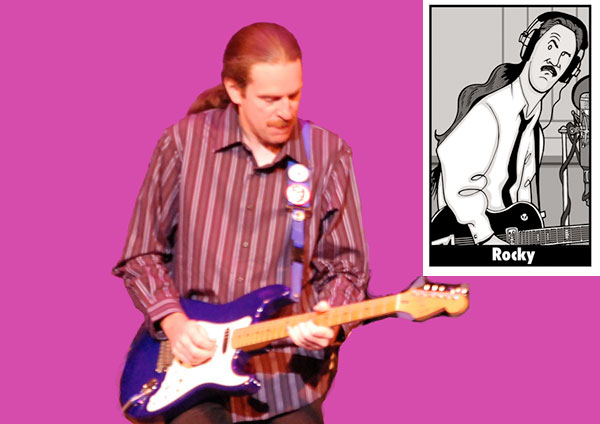 John Merjave plays lead guitar in The Weeklings, a band inspired by The Beatles and the British Invasion sounds who is featured in the latest issue of New Jersey Stage magazine. To read the interview with Glen Burtnik (Lefty) and Bob Burger (Zeek) and hear a pair of tracks from the band's upcoming album, click here.

I first heard John play during Glen's Beatles Bash shows, playing the role of George Harrison and doing so very honorably. Since then, I've seen him as a duo with Bob Burger and as a member of The Weeklings where he is known as Rocky . His bio lists his earliest music instructors (or inspirations) as The Beatles, The Beach Boys, and The Four Seasons.  With that trio, it's easy to see why I love his playing.  Ironically, his bio lists his first love as the drums, but once he was determined to learn guitar, he was hooked on it.

The Weeklings have a new album coming out that was recorded in the same studio in London where The Beatles recorded their albums.  I spoke with John via email about the band and the new disc.

I remember reviewing one of the Burtnik Beatles tribute shows and saying you guys should give it a go as a band.  You sounded interested.  What took it so long?

I don't remember the conversation, but that response doesn't surprise me.  When you get a chance to play with such talented musicians, who wouldn't want to continue on?

When the band idea originally was proposed, was everyone on board with the Beatles-centric (largely unreleased Beatles tunes) or were some people interested in an all original approach?

I don't think an all-original approach ever came up, initially.  We just wanted to play out, doing the songs we all loved to play, and that suited the four-piece lineup.  The originals started to come into play once we started really gel as a band.  Zeek and Lefty had these Beatle-esque ideas and we would work them out during rehearsals.  Eventually, we started to build a small catalog of originals that were pretty cool and REALLY fun to play.

I know you've got a bunch of projects going on.  What bands/artists do you regularly play with?

Given that I am a full-time musician, pretty much whenever the phone rings, I'll book the gig.  I play a bunch of gigs with this very talented singer/songwriter named Bob Burger (grin), but I also play out with my bands Three Of A Kind, 27 West, and Big Girls Blouse.  We mostly do cover gigs in the NYC area, as well as up in CT.

The band tried sounding as much like The Beatles in the studio as possible for the first recording. For this one, you actually recorded the album where The Beatles recorded. What was that experience like for you?

By now, I think I've run out of superlative adjectives to describe the experience.  For the first hour or so, I was a fan boy, totally mesmerized by where I was and the historic significance of the place.  I took it all in: the height of the ceiling, the baffles on the walls, the stairs leading up to the control room, the smell of the parquet wood floors....everything.  After that, it was down to business and, from then on, all that I could focus on was the music.

Had you ever been to Abbey Road Studios before?

Only as a tourist back in 2003 (I think) when my wife and I visited London, but strictly as a tourist.  We did the compulsory 'crosswalk' photo (in the rain) and graffitti'd up the outer wall!

Do you personally try to emulate the style of Harrison when you play these songs or go your own route?

In certain instances, I draw on Harrison-style licks and chord voicings just to make the songs sound Beatle-y.  I try to use the same guitar, or type of guitar, that George used for the specific 'period' we're trying to recapture.  But, in others cases, I draw on Harrison's influences (Carl Perkins, Chuck Berry, etc.) to, possibly, gain some insight as to what he might have played.  I've also strayed outside the box a little, but never TOO far!

Finally, what have you learned about the guys in The Weeklings that you didn't know from playing the tribute shows?

How long is this article gonna be?

The Weeklings will hold a record release party on Friday, November 11 at House of Independents (572 Cookman Avenue) in Asbury Park, NJ.