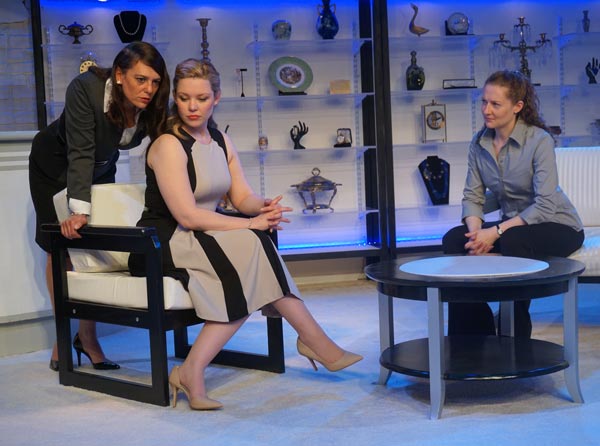 (LONG BRANCH, NJ) — Villainous Company is not so much a whodunit, but more like a who’s doing it to who now fest. The quick moving production features three women in a highly entertaining madcap caper as they play a game of cat-and-mouse.  Running straight through without intermission, the play contains more than enough twists and turns to keep you thoroughly interested in the story. Written by Victor L. Cahn, the play is currently enjoying its NJ Premiere at New Jersey Repertory Company in Long Branch, NJ.

The play revolves around Claire (Pheonix Vaughn) - a young, retired single woman who loves to shop and has a collection of fine items in her house.  In fact, the living room that forms the setting resembles something out of a retail store with beautiful pieces stored elegantly on shelves.  Claire returns home from her latest shopping trip as the plan begins, but as she goes through her packages she realizes one is missing.  She instantly phones the store to see if a clerk can locate it for her.

While on the phone, there’s a knock on the door.  Out of a pouring rainstorm comes the clerk from the store who sold Claire the items.  She basically lets herself in from out of the rain and makes herself comfortable.  The woman (Joanna) first appears as someone rather obsessed with Claire and her apparent wealth.  She thanks her for being so kind to people and compliments her on her wonderful taste in fashion.  As she goes on and on, Joanna reveals that she has been keeping a close eye on Claire and her friends that she often meets for lunch.  As the conversation progresses, it becomes clear that Joanna is not a crazed clerk after all.  She works in security, but for whom?

Joanna presses Claire on the items she purchases, how she manages to acquire the items, and her former employment status.

“Buying and selling is what makes America great,” said Claire.

“Do you feel you deserve everything you have?” replied Joanna.

“I don’t know if I deserve it, but I’m keeping it,” Claire answers.

Apparently, the mall area that Claire often frequents has been the site of many stolen items and Joanna is positive she knows who is behind the thefts - Claire and a particular friend of hers.  She goes through Claire’s purse, finding nothing. She taunts Claire to open the package she brought from the store, believing it has a connection with the rumors of something big about to go down.  Everything from drugs to jewelry to smuggled goods is thrown about.

“Should I have asked you for identification when you came in?” asked Claire.

“Would you recognize a badge?”

The two go back and forth, switching from positions of power to weakness.  Claire can tell that her guest knows something, but is missing the final pieces of the puzzle.  Joanna mentions that they have had their eye on her friend Tracy as well.  The two have been followed for quite some time.  Joanna rattles off stores they’ve been too, purchases made, and even what they’ve ordered for lunch.

Eventually, Claire demands to go through Joanna’s purse and checks her identification.  She then checks to see if she’s wearing a wire.  As Joanna stands with her shirt off, Tracy enters the room.  With the third member of the cast on board, the mayhem steps up a notch.  At this point it is obvious that someone in the room is a thief, but who?

As with the best whodunit type stories, the clues are present the whole way through. The genre works so well because generally the most obvious clues are the ones we’re most likely to overlook…

In addition to the new production, NJ Rep was celebrating the official closing of their new property (the former West End School) located in Long Branch.  The theatre may eventually be leaving its Broadway location, but the plays keep getting better and better. 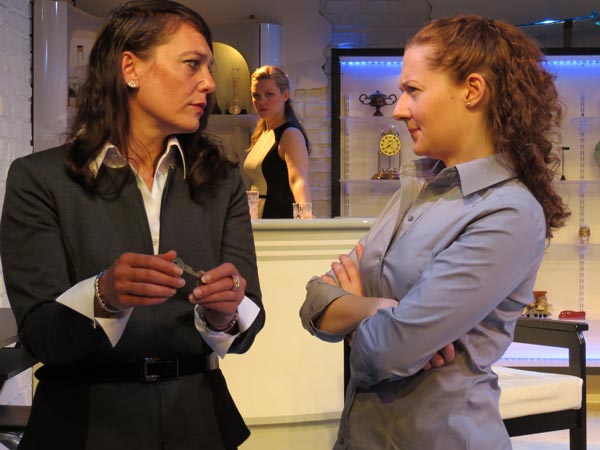