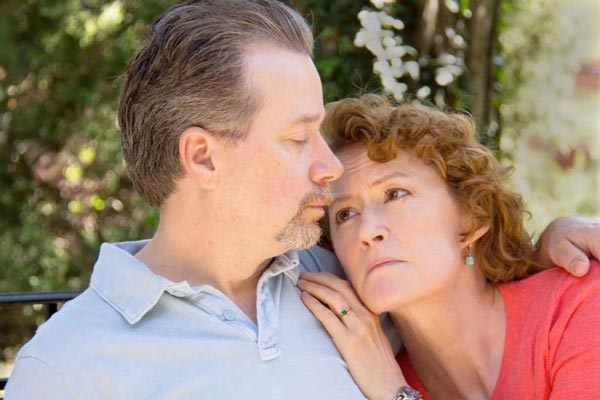 (WEEHAWKEN, NJ) -- Kudos to Hudson Theater Works for championing the premiere of Joanne Hoersch’s “Jackson is Gone.”  Hoersch has a unique voice and presents an intriguing premise that makes for an evening apt to spark conversation.

While out for a walk one weekend morning with their dog Jackson, Natalie (Hollis McCarthy) and her husband Sam (Mark McCarthy).  Sam yells at a driver whose music is too loud.  Jackson runs off and ends up kidnapped by the driver.  The Grayson’s meet with a local police detective Blakemore (Ryan Scott) who slowly infiltrates their life infuriating Sam, confusing Natalie, and intriguing but annoying their son Slick (Hudson Rhotenberry).  Scott is appropriately creepy, revealing a need for love and fame.

Realism is strained as Natalie ends up going to Blakemore’s house – ostensibly to get Jackson’s scent imprinted on police dogs.  There she meets Blakemore’s own dog (Meredyth Morrison) that performs odd tricks like smiling.  Here director Frank Licato might have fared better with having the dog be imaginary to audience and Natalie, but only seen mid-act two by the audience.  Natalie ends up having a panic attack and going to the hospital when Blakemore shows up.

Hoersch slowly reveals Natalie’s past as an exonerated criminal who got caught up with bank robbers.  She’d gotten into a confrontation with a shop owner while her car was running – when she gets back bank robbers use her as the getaway driver.  Blakemore is fascinated by a past the Grayson’s tamp down.  Ultimately, he aspires to having his own Wikipedia mention in her story.

Hoersch gives the actors some sharp knowing lines “I rarely give into hope – its one of my few strengths.”  The script meanders a bit.  Largely the cast is well served by Licata’s taught direction.  Hollis McCarthy has a meaty role – leading a family dealing with ineffable loss and the consequences of her actions.  She centers the show graciously and unfailingly hopeful.  Mark McCarthy defends and is defensive, lending arch support while trying to buy off or out Blakemore.  Scott’s Blakemore struggles for menace and lands squarely in neediness.  Rodenberry is steadfast and sturdily understanding and accommodating in an underwritten role.  Morrison has a thankless task but fares well as the perfect best friend to Blakemore.

The show has some pointed dialogue, pert lead performances, nice projections title the scenes. “Jackson is Gone” isn’t perfect – it definitely sags in act two as everyone seems to need to get a monologue and the plot is put on hold for the players key moments to be hit.   Hoersch has some nice metaphors and Licato’s direction supports the players well.  The script, strains credibility, but has larger themes about fame, loss, acceptance, and choices worth developing further.

The show can be seen at the Weehawken High School through November 21.  It will be performed Wednesdays, Thursdays, Fridays and Saturdays at 8 p.m. and tickets are $25 general admission available through Brown Paper Tickets at 1-800-838-3006, www.brownpapertickets.org.