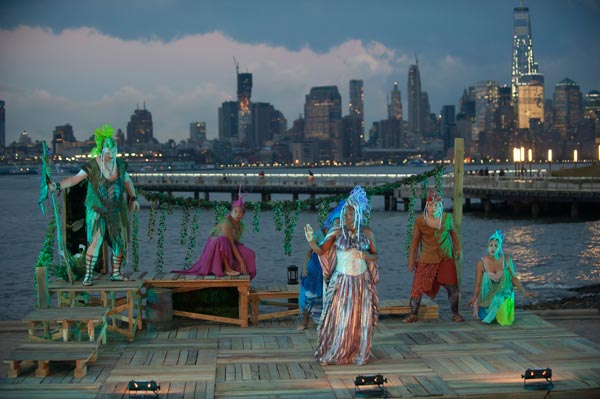 With the backdrop of New York City at dusk and the Hoboken pier, Mile Square Theater’s production of “A Midsummer Night’s Dream” has an unbeatable setting.  Set in the 1950’s of Hoboken, bobby sox and greasers play the lovers of Shakespeare’s play.  The conceit doesn’t add or detract from the play so much as give the lovers and players comfortable costumes for much of the show.

Hermia (Nicole Kang) and Lysander (Adam Maggio) love each other; but Hermia’s father Egeus (Lou Carbonneau) wants her to marry Demetrius (Ryan Neely) who is loved by Helena. Lord Theseus (Dillon Heape) insists that Egeus must have his way, and gives Hermia a month to consider her options – loveless marriage, convent, or death. Hermia and Lysander decide to run away and to meet in the forest. Hermia tells Helena of their plans, and she in turn tells Demetrius, in the hope that he will like her more for telling him. Demetrius chases after the eloping couple, and Helena chases after him.  They rush off to the forest where mischievous sprites meddle in the love affairs with a bit of magic and confusion.  Shakespeare and director Chris O’Connor guide us to a happy ending complete with several Sinatra tunes.

O’Connor’s production is nimble and moves effortlessly.  The actors are all reasonably comfortable with the text.  The production truly comes into its own with the solid, stolid comic players of the play within the play led by Peter Quince (Lou Carbonneau), Bottom (Matthew Lawler), Frances Flute (Andrew Baldwin), Sung (Brendan Rubin), Snout (Miki Hellerbach) and Starveling (Jake Harrison).  Here the comedy really comes to the fore and the cast is at ease and having fun.  The rest of the company watches the foibles of the unfortunate lovers, Pyramus and Thisbe, and are able to enjoy and laugh at it – as is the audience.  And in the end, Puck (Jen Rabbitt Ring) sends us off with the notion it was all a dream.

Mile Square is to be commended for putting forth a production in nature with a minimal but efficient set of crates and platforms which expand to suggest the forest (designed by Matthew Fick).  This is a pleasant effective summer confection that pleased an audience of passerby children and adults alike.

The play and its players can be seen in Hoboken along the waterfront through August 9th.  More information at milesquaretheater.org

** For more photos from the play see our preview here.