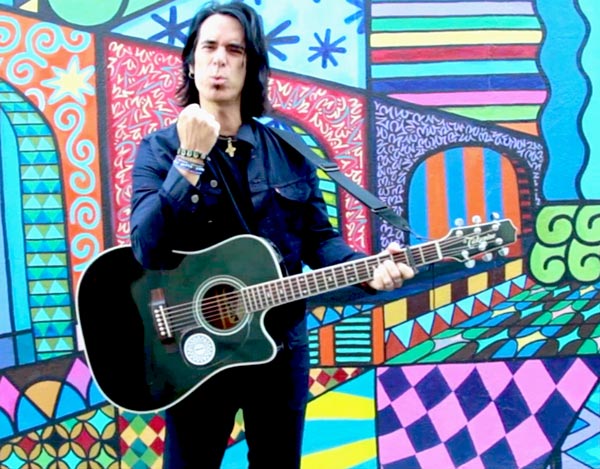 Ray Andersen has had an impressive career as a rock and roll musician with stints in bands from the legendary Stone Pony house band Cats On A Smooth Surface to national acts like Meat Loaf, but he may be best known for something that began as a side project in 1994 — mr. RAY.

The side project began innocently one day when Andersen was asked to come in an perform some songs for kids at the pre-school his wife was working at. The kids loved the music and the side project soon became something more.  Andersen discovered that performing music for children was much more rewarding for him than rocking out for adults.  He soon moved from performing songs like “Yellow Submarine” to original tunes that he created.  He sought to write songs that featured lyrics for children but with music featuring Beatlesque influences that adults would love as well.   After doing this for just over 20 years, Andersen is ready to take it to the next level.  His latest release, No Room For Bullies, tackles an issue that’s close to his heart.

Andersen, who grew up in West Orange and currently lives in Highland Park, was inspired to create a record about bullying by the suicide of Rutgers student Tyler Clementi and the personal struggles of a niece who was the victim of physical and verbal abuse by her boyfriend at the time.   While mr. RAY’s songs have often involved dinosaurs, rainbows, and zebras, Andersen believes the anti-bullying message has always been present in his work.

“On a lot of the songs for very young kids, I have tried to instill, as part of the lyrics, a sense of being friendly with each other,” he explained. “So, the seed for this anti-bully message was planted ever since I began making music for kids.  As far as this project’s legacy, you never really write for that reason alone, but you do hope the songs and how they’re recorded and performed resonate with whomever listens to it.”

One of the songs on the record was written in memory of Clementi.  The song, “It Was In Your Heart (For Tyler),” features Reagan Richards and Layonne Holmes. Andersen has been in contact with Clementi’s family and received permission to use his image in a video.  He says the family is behind the message he’s trying to present.

The songs on No Room For Bullies are not part of a concept album, but they all address bullying, diversity, tolerance, and respect for each other’s differences.  Andersen said he believes bullying today is much worse than its ever been.

“It’s absolutely worse, largely due to the internet,” explains Andersen.  “Cyber-bullying is totally pervasive and does lead to horrific consequences, as we’ve all, unfortunately, seen with Tyler Clementi...may he rest in peace.”

This record marks the first time Andersen has incorporated hip hop artists on a release, although he has used rap in many live shows in recent years. “My decision to utilize the genre, was to be a bridge to this new age group (for me) without sounding too gratuitous,” said Andersen. “I had a ball. The three rap artists, Third Person, Kosha Dillz, and TC-Uno, created such amazing, pertinent lyrics, and style to the tracks they’re on.”

Other guest artists on No Room For Bullies include Bobby Bandiera (from Bon Jovi and previously with Southside Johnny & the Asbury Jukes) who Andersen has performed with ever since his days in Cats On A Smooth Surface in the eighties; Everett Bradley (a member of Bruce Springsteen’s band and musical director of the Meredith Veira Show); Mackenzie Shay;  Emma Kothari; and a group of kids (13 and under) which include Andersen’s daughter Layla.

In recent years, Andersen has begun adding a few shows a year for his adult fans, bringing out the artist he jokingly calls “Dark Ray.”  The shows are usually as a solo artist or a duo with his friends, but he also performs as a part-time member of Bandiera’s popular Jersey Rock & Soul Revue shows.  His career has taken quite a turn from the days when he led the alternative rock band Blue Van Gogh on a tour of Germany as the opening act for Matchbox Twenty, but he couldn’t be more pleased with how it has turned out.

“In some strange way, I actually could have imagined it turning out this way,” explains Andersen.  “I always had my rock god idols like the Beatles, Stones, and the Who, but I always had this affinity with Hollywood actors like Danny Kaye, Dick Van Dyke — musical actors that transcended age and their genre and were able to connect to young and old alike.  Creating and performing music for kids and families let’s me do just that.

“I perform at many kids’ parties to this day, mostly in the central/north Jersey areas,” he continued. “It’s still a ‘show’ in the form of singing for my little audiences, but I also invite all the party kids to come up & sing a song on the mic, and invite them to come up and strum my guitar. I love talking with people and it’s always a great way to meet so many folks from all backgrounds, professions and histories. Parents always invite me to hang out afterwards to do just that.   What I do here with kids, is absolutely what I was meant to do here.....no doubt about it.”