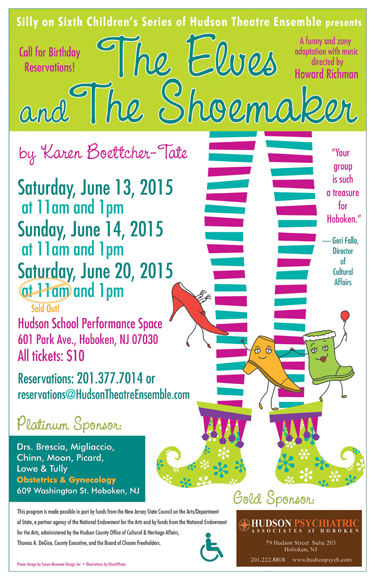 (HOBOKEN, NJ) -- It is a sad day when your nine-year-old child is largely resistant to the charms of well-produced and executed children’s theater.  But for the three to seven year olds who are impressed by cute songs, nuanced – not cloying performances by charming actors with solid comedic timing that doesn’t talk down, head over to Hudson Theater Ensemble’s Silly on Sixth production of the “Elves and the Shoemaker.”

Howard Richman’s production focuses on Matilda Cobblestone (Nannette M. Matos) and Lockhart (David Silberger) a giving, generous, considerate shoemaker who seeks to have more than just soup for dinner.  They owe money to the evil Sneerella Twerm (Florence Pape) who seeks nothing more than to evict them.  The determine shoemaker has scraps of leather left but he makes a beautiful pair of shoes which he promptly gives to an old lady (Wendy Eaton) with no shoes.  The Cobblestones are rewarded for their generosity by making additional shoes with the help of three elves played by Richard Dwyer, Leah Sayad, and Deborah Michels.  The shoes catch on and soon everyone wants a pair.  While the Cobblestones only want a factory that will employ everyone in their town and bring jobs and security to one and all.

The message is clear – pay it forward.  Pass along something you have to someone else and you will feel good for your generosity.  A nice message of teamwork and sticking with your dreams also comes through nicely.  There are bits of audience interaction between the elves and even a kindly fairy godmother.  The younger members of the audience were rapt with attention and fully engaged.  My daughter perked up when one of the songs was sung to a tune she knew.

David Silberger brings a warm, welcome, goofy verve to his role of Lockhart.  Florence Pape brings non-threatening evil to her dual roles of Sneerella Twerm and fun as a running obsessed Mrs. Snootbottom.  The three elves have distinct personalities and win the audience over with their determination and desire to please.  Wendy Eaton and Nannette M. Matos are pleasant and not over the top in their roles.  Howard Richman’s Mayor is well played and he has a fine cast and firmly directed this charming entertaining fairy tale.

The gift of Silly on Sixth is that even if you are a hot, overly tired nine year old or a three year old seeing your first show or a parent looking to stay cool on a June day – you will be entertained, learn something, and be impressed by the professional love gifted to children of all ages.  Something in the script, an actor’s turn with a line, a song will gather your attention and draw you into the fairy tale – even if you are firmly at the age of disbelief and prefer the auto tuned laugh track of commercial children’s television.   This polished production is well produced, fast moving, and wholly pleasant.  Embrace the obvious magic of Silly on Sixth’s  “Elves & The Shoemaker.”  This production is a bargain with a wealth of benefits and morals compared to the more teenage oriented “entertainment” facing my daughter and I in the years to come.