REVIEW: "Next To Normal" at Rhino Theatre 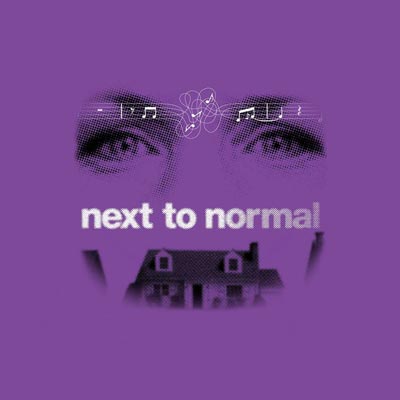 Great theater, really great theater, should work on many levels at the same time: emotional, intellectual, physically. "Next to Normal" at the Rhino Theatre does just this. It isn't perfect, but nothing in life is. And that is entirely the point of this Pulitzer and Tony winning musical from Tom Kitt and Brian Yorkey as directed by Jo-Ann Ventor and Carmela Wolosz which is moving on all these levels. Whatever your weekend plans for the new few weeks, consider making this production part of them. You will be rewarded wholly.

The show is dramatic from the opening chords to the soaring, uplifting, hopeful finale. It has something for everyone - young high school lovers who challenge and corrupt one another; family issues; ignored teens who get to stand up to their parents; love, denial, and ignorance, and an amazing score rendered wonderfully by the talented cast of six.

The show opens on a typical morning - mom making breakfast as family rushes out to school and work. Yet around the corner, something is different especially as mom makes sandwiches on the floor. Diana (Randi Seffinger) holds too tightly to her memories threatening the fiber of her family life - son Gabe (Rob Ryan) and especially her largely ignored 16 year-old daughter Natalie (Anna Nicole Ventor) and her husband Dan (Matthew Haines). Natalie flirts with stoner Henry (Robert Snyder) a biblical serpent - especially with his ability to render an ordinary apple into a bong. While Dan whisks Diana to a series of Doctors (Brendan J. Bartlett) to free them from depression. Heavy doses of pharmaceuticals and electro shock therapy -propel the family toward potential normalcy - despite Diana's losing 19 years of memories. This description really doesn't do justice to Kitt and Yorkey's original creation, which is ripe with intense musical numbers of longing, denial, memory, connection, hope and love.

This is Buzz' second production of Next to Normal - the first premiered in February in Ridgewood. At the Rhino - the set is a bit larger and closer to the original multi-level Broadway design. Yet it powerful and moving. My cohort hadn't seen or heard of the show and we were both moved to tears and laughter through out the evening.

There are wonderful moments writ large and small with this production - from the expressive face of Rob Ryan, the powerful emotive singing of Anna Nicole Ventor, and the overwhelmingly moving Matt Haines. Bobby Synder presents a relatable, loyal boyfriend in Henry and sings and acts wonderfully, capturing nice moments through out the show. Brendan Joel Bartlett's Doctors offer their Mephistophelian verve but also bring welcome emotional resonance and a sense of desire to heal. Randi Seffinger's Diana is plaintive and well acted and sung in a demanding role.

The band led by Sean Cameron comes on a little too strongly in some numbers and Ryan's choreography intended to be macho reads more as too tight pants - but this are quibbles especially as the cast gets to singing.

Sellinger and Ventor in "Superboy & Invisible Girl" movingly convey the loss of the neglect.

Ryan's Gabe pays off beautifully in "There's a World" in Act 1 and even more in "I am the One" his confrontation with Dan late in Act 2. Their harmonic voices blend amazingly.

Haines renders quiet hope and determination to piece his and Diana's life together while failing to see the potential for longer-term damage. While Seffinger's Diana offers a well nuanced performance cleverly showing a kaleidoscope of anger, fear, yearning, sorrow, guilt and the memory of what must have once been love in every note she sings especially in "I Miss the Mountains" her yearing for a life lived differently.

Next to Normal is a wonderfully written and performed musical that serves as a prism into the lives of those dealing with mental illness and the affects it has on family. It's adult themes - home, memory, relationships and the kaleidoscope of emotion touches the audience in a way few shows ever can. Ultimately it is a show about our willingness to rip off the band aid and move forward, past the memories and fear we've willingly allowed to fester far too long.

Theater is a communial experience -- allowing an audience to experience a range of thoughts and feelings, bringing their own experiences to bear but still coming away entertained and enthralled. Buzz and it's crew, cast, and band are to be commended for presenting compelling, moving, powerful theater. And I welcome their future productions enthusiastically.

The production plays weekends through June 20th at the Rhino Theater in Pompton Lakes. For tickets and information to go rhinotheater.com