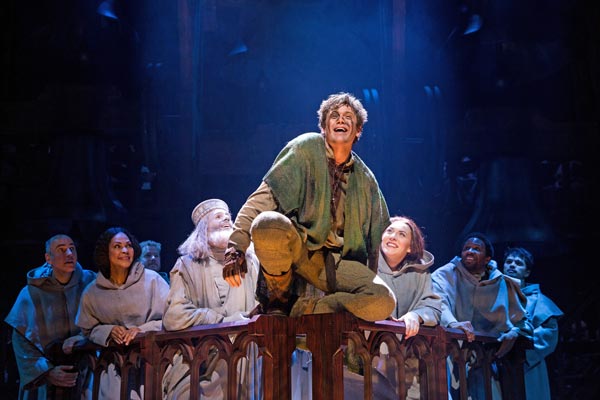 (MILLBURN, NJ) -- Papermill Playhouse launched their newest musical "The Hunchback of Notre Dame" Sunday, March 15th.  The production is backed by Broadway legends Alan Menkin (Music) and Stephen Schwartz (Lyrics).  The two teamed previously on the Disney animated movie of "Hunchback" and "Pochohantas." Yet this is the first on stage collaboration between the two.  And they offer a lush, emotionally rich score and searing songs which veer from liturgical, ballads, to dramatic.

Alexander Dodge foreboding set places us squarely in the cathedral.  Framed on both sides of the stage, we see scaffolding, above are the famed bells, behind the famed stained glass windows.  A chessboard floor hints at the characters strategic survival moves.  On the scaffolding is the impressive Continuo Arts Symphonic Chorus whose 32 voices rouse the audience with a master class of oratorio in Latin and successfully - if a bit over-used - they sets the proceedings, comments, and cement the atmosphere.  Visually, the show is stunning, and Howell Binkley's lights against Dodge's set works powerfully and reflect the gothic mode of Victor Hugo's original novel.

Director Scott Schwartz's de-emphasizes the special effects and focuses on the performers. There are puffs of smoke and trap door exits but the most powerful theatrical moment is Quasimodo becoming a Hunchback by donning his hump and scars. Arden's physicality and delicateness marks a delightful turn as the lead. While thespians change roles before our eyes and narrate the action in third-person direct address, forming a Greek chorus that largely only Quasimodo and the audience can hear. 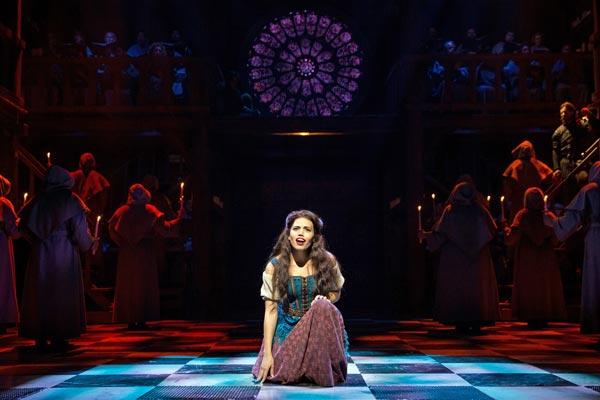 There's little in the way of Peter Parnell's book, save for some exposition, he leaves the heavy lifting to the songs.  And there are some beautifully sung moments - though not enough for Arden who shines in "Top of the World" and leads with detailed, nuanced delivery, and outstanding vocal in "Made of Stone" While Page brings down the house with his wickedness-justifying anthem "Hellfire."

Minister Claude Frollo (Patrick Page - icy perfection) watches his beloved brother dies and is left with a baby who he raises in the bell tower of the cathedral.  The baby grows up to be the famed Hunchback (Michael Arden).  Frollo is on a mission to cleanse Paris of lechery and foreigners - especially the gypsies who may have seduced his brother.  Quasimodo develops into a kind, yet isolated young man who yearns for a life outside the bell tower, but accepts Frollo's perception that he is a "half-formed" monster who would be rejected by the outside world.  Esmeralda (Ciara Renée), the gypsy enchantress, emerges as the center of a love square which includes Quasimodo, Frollo, and the noble Captain Phoebus de Martin (Andrew Samonsky).

There's not much in the way of chemistry or for Samonsky and Renee to do.  She dances well in "Rhythm of the Tambourine." Samonsky gets a few one liners but these characters are as static as the sculptures that adorn the cathedral.

"Hunchback" deals with the complex shadings and backgrounds that shape who we are and who we should strive to be.  Quasimodo learns to embrace himself and grow into himself as a man, as he stands up to Frollo. And although Quasimodo may not be able to share his life with someone, as he deserves, the show ends with a hope that maybe the world will be better "one day, someday soon."

The Hunchback of Notre Dame runs now through April 5 at the Paper Mill Playhouse in Millburn, NJ.  For more information visit papermill.org 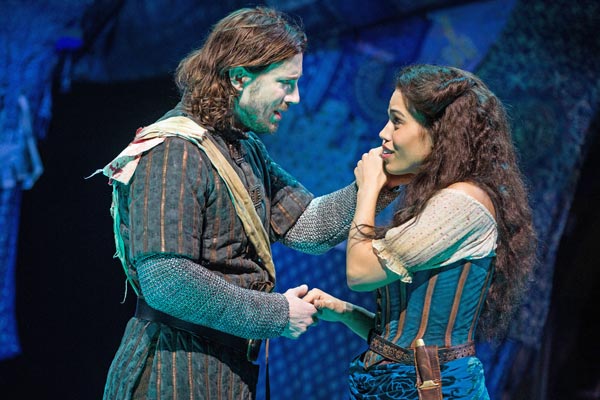