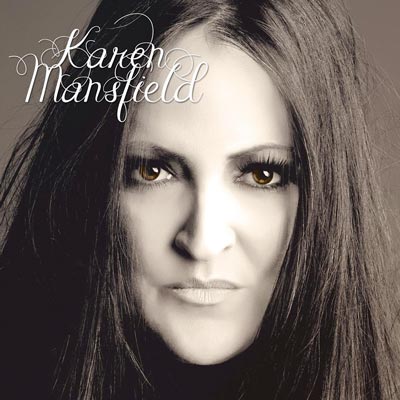 Karen Mansfield has been part of the New Jersey music scene for decades, yet this is her first official release. Guided by experience, it's clear that Karen does things her own way and in her own time. Surrounding herself with the area's top musical talent, her self-titled debut is being distributed on her own label, Willow Bella Music. Recently marking 25 years of sobriety, Karen's confessional songwriting style celebrates the possibilities of the future while still acknowledging the temptations of a weathered past.

The six-song EP kicks off solidly with of the disc's one true rocker, "I Know You Know." This is the radio track (if there is such a thing anymore), piloted by the driving beat of drummer Dave Halpern (Highway 9, Love in Reverse), and featuring a toe-tapping refrain with capable vocals that send the song soaring. In contrast, the country-flavored "No More Suffering" dials it back, slowing the pace when I thought I was in for a full-ahead rock collection. But I was coaxed back in with the delightfully twangy lap steel work by talented session player and Middletown native Robert Butkowski, accented by a jaunty keyboard solo by EP producer Rob Tanico (Mr. Reality, Highway 9). The multitalented Tanico also handles all the EP's bass lines alongside his Highway 9 comrade Halpern, kicking in on acoustic guitars, keys, and even percussion.

By the third track, "Your Lies," Karen's range of styles is evident. Here, you'll sense an LA sound circa 1976 in "Your Lies" (think Fleetwood Mac, the Eagles, Linda Ronstadt), which glides onward thanks to Butkowski's lilting, lyrical lap steel. The Heartbreakers-ish Americana vibe of "Just a Man" tells of a wistful, torn woman who's continually confronted with the lure of her former lover. As so many of us can attest, there's something undeniable that still draws her in. It's an irresistible urge, and she should know better ("God knows that I want him. Maybe he's the ghost that leaves me haunted"). Karen's vocals are bolstered here with a trio of ladies whose harmonies add a very real, layered dimension to the "voices in my head" appeal behind the song (Should I? or Shouldn't I?). Karen does reach for some vocal heights at the climax of this tune, bolstering my theory that she has more to offer vocally…if she would just let it out.

An upbeat little pop ditty that picks up where "Just a Man" left off, "Destiny" features a fabulous Farfisa-flavored keyboard solo by Tanico. In spite of her battles and demons, the singer presses on forward, and this time, she is firm in her resolve to abandon the temptation pulling her back, as better things are ahead. Karen sends the disc home with the optimistic "Keep On (For The Sunny Days)," elevated by the band to places it might not have otherwise gone. Guest keyboardist on this track is man-of-a-thousand-bands Billy Siegel, keyboardist for Dramarama and founding member of Union County's Whirling Dervishes. The track also features a nicely plucked solo by guitarist P.K. Lavengood, whom many will recognize from New Jersey native John Eddie's band.

Having seen Karen live twice before, I really wanted to love Karen Mansfield. She is gifted with a lovely voice, has written a collection of gritty, honest, relatable lyrics, and has backed herself with a crew of the area's most talented musicians. But given this impressive range of styles, I do wish Karen had harnessed the full vocal power I believe she has to more sincerely communicate the mood shifts and emotion from one song to the next.

NOTE: Karen Mansfeld will celebrate the release of her new cd at The Saint (601 Main Street) in Asbury Park on Sunday, November 16 at 2pm. Admission is $10 in advance or $14 at the door and comes with a free copy of the CD. Click here to purchase tickets online.