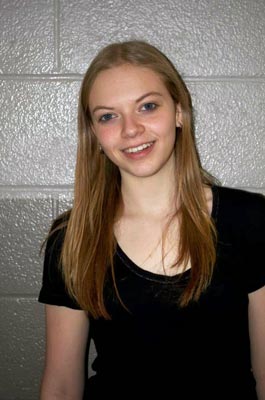 (BERGEN COUNTY, NJ) -- Emma Iacometta, a senior at the Bergen County Academies of Visual and Performing Arts, has been selected to receive the 2014 Harry K. Berkheiser Jr. Scholarship and will be presented her award at a breakfast ceremony on Tuesday April 29th at 9:00am in the Ciconne Theatre lobby on the campus of Bergen County Community College. Ms. Iacometta will be attending the University of North Carolina School of the Arts in the fall, pursuing a BFA in Stage Management.

Skyline Theatre Company created this $1000 cash scholarship, named for New Jersey educator and founding Skyline member Harry K. Berkheiser Jr., to be awarded annually to a Bergen County high school senior who has a true passion for, and will be furthering their higher education in Theatre, Television or Film.

"We are thrilled that we had such a wonderfully diverse group of applicants, the highest number to date," says Sam Scalamoni, Skyline's Artistic Director. "Through continual generous donations from the family, friends and colleagues of Harry Berkheiser, we are pleased to be able to continue this scholarship for young people who show a true commitment and dedication to these branches of the arts." Mr. Berkheiser passed away on October 9, 2007.

Applications for the Harry K. Berkheiser Scholarship are accepted each year by March 15th and are reviewed by a select committee of the Board of Trustees. Contributions to secure the longevity of this valuable scholarship may be sent to Skyline Theatre Company, 12-45 River Road, #121, Fair Lawn, NJ 07410. For more information, please visit www.skylinetheatrecompany.org.