NJ Musician Wants To Live In A Dome 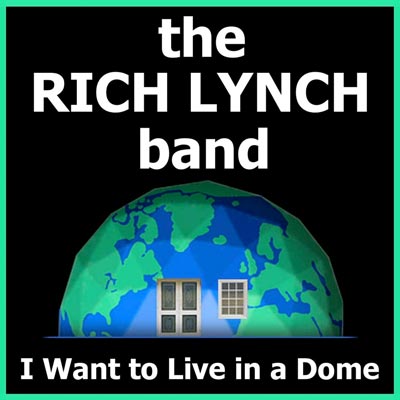 My first thought upon hearing that Rich Lynch wanted to live in a dome wasn't that he was crazy, it was what does his wife think? Apparently, the Ringwood, NJ, musician chose the right person to share his life with because Laura (his wife) shares his dream of "embracing a more enlightened way of functioning on a daily basis."

According to Lynch, his dream of living in a dome began from a very early age. He claims it originated during the 1967 World's Fair when society was envisioning a bold future of domes and high-tech convenience.

"There's a story in my family that when I was two years old I ruined the vacation to the 1967 World's Fair in Montreal, Quebec," he explains. "I remember seeing the Buckminster Fuller designed pavilion for the United States - a giant 250-foot diameter geodesic dome - and feeling an all consuming need to get closer to it. They tell me I ran off, tripped, and acquired a severe bloody nose that would not stop. I haven't been able to get the idea of living in a dome from out of my mind since!"

Fast forward fifty years and the futuristic present has yet to truly arrive and the idea of living in a dome isn't everyone's idea of domestic bliss. Nevertheless, Lynch hasn't given up on his goal to acquire alternative housing. In fact, he's trying to use music to help him achieve his dream. He recently released a song called "I Want To Live In A Dome" which promotes his vision and aims to raise revenue towards the goal. The song is available on iTunes, Amazon.com, and various digital distributors under the Rich Lynch Band name.

Reaction to the heartland-based song has been good so far. "We modeled the production around the more rockin' tracks on The River by Springsteen," said Lynch. "People seem to like it. A couple said I sounded like Mellencamp so that's a start."

While the idea of building a dome sounds expensive, Lynch says the cost is no more or less than constructing a standard stick home. He plans to build his dream dome in Ringwood, NJ, where he currently lives.

"I like to think outside the box," says Lynch explaining that he's excited for the day he gets to move into a dome home. "These forms are energy efficient, provide a flexible use of space, and have proven to be more disaster resistant than the traditional squares and rectangles that are the staples of our society."

Lynch and his wife both got sucked into the "Under The Dome" series last year on CBS -- a program that helped his dream for a dome to return. Meanwhile, despite long being a part of the New Jersey music scene due to his work on the websites Kweevak.com and Soundpress.net where he's reviewed shows and records and conducted interviews with dozens of artists over the years, one thing that has been missing has been an emphasis on his own music career. Lynch hopes that the vision for the dome might help awaken his musical dreams as well.

"There's a lot on the line for me right now," admits Lynch. "Maybe, I'm having a mid-life crisis, but I'm going for it. And, there's two dreams I'm in pursuit of now - the dome and a career in music. This house is going to have the nicest studio and performance space built in!"

To follow his progress towards his dream, visit http://www.richlynchband.com