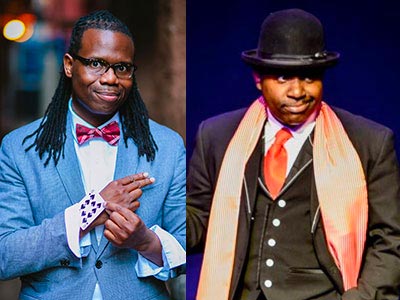 Breathtaking, mind-blowing and astonishing are just a few words that describes The Heart & Soul of Magic. This show features two world class magicians, Ran’D Shine and Jamahl Keyes, in a unique production that weaves a tapestry of psychological illusions, comedy and music to create an immersive amazing experience that will keep you at the edge of your seat.

This is a show the entire family will enjoy!

Combined, both magicians have performed in over 30 countries and have been seen on the CW Network, TNN, B.E.T. and in theatres around the country. Now this your chance to see a magic show like no other!

In the time that it takes you to read these words, Ran’D has already read your mind and likely figured out which card you will pluck from the deck a week from now. With the flick of a wrist, the Philadelphia native has become a global phenomenon and as his fans will so gleefully attest, he is so much more than a magician.

Ran’D is the face of magicians for the new millennium. He prides himself on being an historian and educator of magic. His brand of magical comedy and entertainment has been on display at Hollywood’s Magic Castle as well as Monday Night Magic, New York’s longest running Off-Broadway magic show.

He wowed audiences with his brilliant presentation at the 44th Presidential Inauguration in Washington, D.C. and is one of the most sought-after college performers. With appearances on “The Art and Soul of Magic” documentary and NBC’s ’10 Show’ to name a few, it is no wonder that colleagues and critics alike are raving about Ran’D.

Born in Baton Rouge, Louisiana, Jamahl, moved up to South Bend, Indiana while in the third grade and it was then and there that he was then bitten by the “magic bug.” In trying to encourage Jamahl to read more, his mother, a school teacher, would perform a magic trick at the dinner table and when Jamahl would ask, “How did you do that?” she would reply with; “I’m not going to tell you the secret but I’ll give you the book that it is in.” Jamahl ended up not only reading plenty of magic books, he became an excellent and confident performer for his age.

As a teenager, Jamahl won numerous awards and began appearing on television “The Kid’s Adventure Zone, Magic and Math” and plenty of other specials. In his 20s, he performed in seven different countries and was also featured on TNN and The Family Channel.