The Great DuBois: Masters of Variety 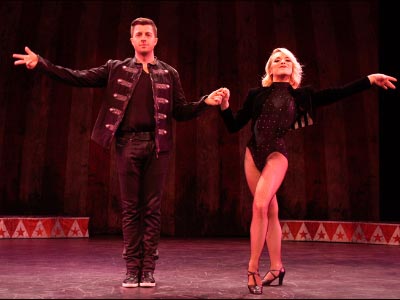 The Great DuBois: Masters of Variety is a fast-paced, high-energy circus show for all ages showcasing incredible feats of juggling, hula hoops, unicycle, circus stunts, contortion, magic and audience interaction all wrapped up in a blanket of comedy.

Recommended for ages 5 and up.

The Great DuBois: Masters of Variety

Simply put…The Great DuBois: Masters of Variety is the most unique 2-person circus show you will ever see!

The award-winning combination of Michael DuBois and Viktoria Grimmy have five generations of circus performing between them, and have wowed crowds at countless theatres, universities, cruise ships, fairs and festivals all over the world.

Recently featured in Hugh Jackman’s hit movie, “The Greatest Showman”, The Great DuBois have amassed an impressive list of credits, including appearances in the Tony Award winning “Pippin” on Broadway, “The Tonight Show with Jay Leno”, “Late Night with David Letterman”, Britney Spears World Circus Tour, and the movie “Burlesque” to highlight just a few.

Michael DuBois has been performing for over 15 years and made appearances on NBC’s “Tonight Show;” “The Jay Leno Show;” “The Late Show with David Letterman;” in “The Greatest Showman,” starring Hugh Jackman; as well as at NBA halftime shows and major cruise lines around the world. Born and raised in the small town of Horseheads, NY, DuBois was a curious, athletic child, always involved in sports and music. He would see the circus with his grandparents every year and learned to juggle in a middle school gym class. He purchased his first unicycle at a local garage sale. After high school, DuBois attended Penn State University where he ran the Juggling Club and the Magic Club with his then performing partner Chris Chelko. He graduated with a degree in Business Management and Photography. After graduation, DuBois and Chelko became full time performers and moved to New York City where they performed at hundreds of private events and universities. In 2009, the duo went their separate ways, and DuBois began his solo career with his show the “Solo Circus”. After years of performing solo, Michael couldn’t be more excited to start performing the new show with his Wife and longtime partner in life and now performance, Viktoria.

Viktoria Grimmy is a fifth-generation Circus performer born into a multi-generational Circus family that toured with the Soviet Circus. After a beautiful career in Russia, Grimmy’s parents wanted to expand their opportunities to the United States, and they moved to New York City. Shortly after, The Grimmy Family Circus began touring private events and eventually embarking on national tours with The Ringling Brothers, and the Barnum and Bailey Circus. Grimmy competed internationally as an aerialist, earning bronze in the Monte Carlo Circus Festival and the World Circus Festival in Latina, Italy. In 2009, Viktoria embarked on the Britney Spears World Circus Tour, performing in the biggest arenas all over the world. After the tour, Grimmy spent two years in Los Angeles, before moving back to New York City to perform in the Tony Award winning revival of “Pippin” on Broadway. In 2015, Grimmy began performing with her husband Michael DuBois in their two-person circus variety show.  Together they worked on the film “The Greatest Showman,” starring Hugh Jackman.