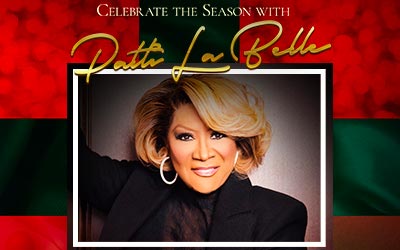 This holiday season, see Grammy® Award-winning artist Patti LaBelle as she performs holiday classics and the hits you know and love! Known for her powerhouse vocals and electrifying live performances, LaBelle’s hits include “If Only You Knew,” “When You Talk About Love,” “New Attitude,” “Stir It Up,” and “Lady Marmalade."

Patti LaBelle is an incomparable force, belting out classic rhythm and blues renditions, pop standards and spiritual sonnets that have created the unique platform of versatility that she is known and revered for. The same motivation that had Patricia Louise Holte blossom from a choir member to lead vocalist for Patti LaBelle & The Bluebelles and later Labelle, to a solo artist, is the same energy that keeps her fire burning at 78-years young.

Additionally, LaBelle has been featured in popular films and television programs including A Soldier’s Story, A Different World, American Horror Story, Empire, Star, and The Kominsky Method, and starred in her own TV series, Out All Night. She’s also wowed television audiences with unforgettable performances on the hit shows, Dancing with the Stars and The Masked Singer and starred in Broadway productions of Your Arms are Too Short to Box with God, Fela, and After Midnight.

LaBelle is an advocate for adoption, diabetes, cancer, HIV / AIDS, and many other causes and non-profit initiatives. While she has reached the heights of success throughout her 60-plus year career, she has also endured and survived personal strife. Within a 10-year period, she lost her mother, three sisters, and best friend to diabetes and cancer. In 1994, she was diagnosed with diabetes and shortly thereafter became a spokesperson for the American Diabetes Association.