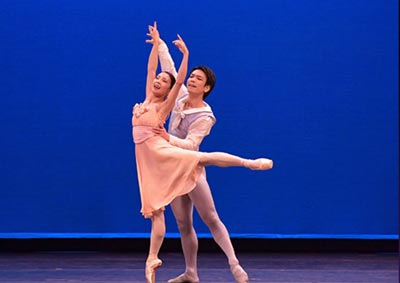 New Direction will feature three works that point to the new artistic vision Maria Kowroski has for New Jersey Ballet as Artistic Director. The program will feature Who Cares?, by George Balanchine, Hallelujah Junction, by Peter Martins, and a world premiere by Harrison Ball, principal dancer with New York City Ballet, with costumes by world renowned fashion designer Zac Posen.

Who Cares? premiered in 1970. Balanchine choreographed to 16 songs George Gershwin composed to create a dynamic that is uniquely American and, more specifically, evocative of New York City. His choreography brings out the exuberance of city life. The fast-stepping, cheeky ballet evokes the lively spirit of Fred Astaire, Ginger Rogers and the 1930s and portrays an exuberance that is charged with a distinctive energy.

Hallelujah Junction was choreographed by former New York City Ballet ballet master in chief Peter Martins to music by American composer John Adams. The music centers on delayed repetition between the two pianos creating an effect of echoing sonorities.  There is a constant shift of pulse and meter, but the main rhythms are based on the rhythms of the word “Hal-le-LU-jah.” The ballet was originally created for the Royal Danish Ballet and features a principal couple in white, a male soloist in black and a small corps de ballet.