A Conversation with Junot Díaz 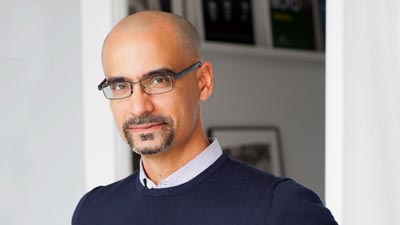 Junot Díaz holds the 2008 Pulitzer Prize for Fiction, a success he adds to an already long list of accolades that have been awarded to his novel The Brief Wondrous Life of Oscar Wao. A true literary triumph, this heartbreaking, at times hilarious, always dazzling story of the endless human capacity to persevere in the name of love confirms Díaz as one of the best and most exciting literary voices of our time.

The book received the National Book Critics Circle Award for Fiction in 2010, won the Mercantile Library Center’s John Sargent Prize for First Novel, and was a 2007 New York Public Library “Book to Remember.” In addition, Díaz’s novel was named a best book of 2007 by The New York Times, the Los Angeles Times, The Washington Post, the San Francisco Chronicle, the Chicago Sun-Times, The New York Daily News, and a host of other top dailies. It was also chosen as one of the top ten books of the year by Time, People, and Entertainment Weekly, among others.

In her review of the book for The New York Times, Michiko Kakutani wrote, “The Brief Wondrous Life of Oscar Wao is a wondrous, not-so-brief first novel that is so original it can only be described as Mario Vargas Llosa meets Star Trek meets David Foster Wallace meets Kanye West. It is funny, street-smart and keenly observed… An extraordinarily vibrant book.” Time magazine called it “astoundingly great” and “the novel of the year.”

Following The Brief Wondrous Life of Oscar Wao, Junot Díaz released another short story collection titled This Is How You Lose Her, which has received an incredible amount of praise and recognition from critics all over the world. In the collection, Díaz uses his talent to write about the haunting and impossible power of love. His debut short story collection, Drown, was also a publishing sensation and is now a landmark of contemporary literature. His short stories have appeared in The New Yorker, The Paris Review, and The Best American Short Stories.

Most recently Junot Díaz  published Islandborn, a children’s book that tells the story of a Dominican child in the United States to bring his longstanding questions of identity, belonging, and home to a new audience.

Junot Díaz is the recipient of a MacArthur “Genius” Fellowship, PEN/Malamud Award, Dayton Literary Peace Prize, Guggenheim Fellowship, PEN/O. Henry Award, and Hispanic Heritage Foundation Award for Literature. He was born and raised in the Dominican Republic, and now lives in New York City and Boston, where he teaches at MIT.

This event is in collaboration with the Visiting Writers’ Reading Series.