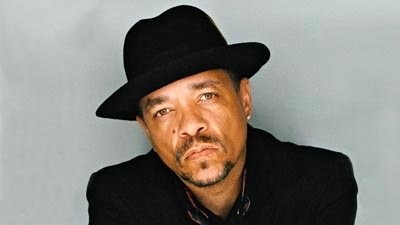 Ice-T not only invented gangster rap, he has lived it. Ice-T is the original embodiment of LA Hip-Hop and a cultural icon. Through his music, his multiple books and his lecture tours of America’s prisons, high schools, libraries, and colleges (including Harvard, Princeton, and Stanford), Ice-T has become a cultural icon and an influential spokesman for America’s youth, regardless of color.

Born an only child in New Jersey, Ice learned the art of survival pretty fast. Both his parents passed before he was 11 resulting in him being shipped to Los Angeles to live with an alcoholic aunt. Ice struck out on his own at 16 and soon became involved in crime while navigating the LA gangs scene then joining the Army.

His first break in the entertainment came when the producers of the film Breakin’ asked him to rap in the movie. He went on to become rap music’s original gangster, writing songs like “Six in the Mornin” and “New Jack Hustler.” Ice-T subsequently formed the thrash metal band Body Count with high school friend and guitarist Ernie C. Body Count’s 1991 self-titled debut contained the controversial single “Cop Killer.” In 2018 Ice and his band Body Count released the lp, Bloodlust, that garnered a 2018 Grammy nomination for the song “Black Hoodie”. In 2020, Ice released a new Body Count album entitled Carnivore, which won a Grammy for the song, “Bum Rush”.

As his politics were grabbing headlines, Ice-T’s film and television career was taking off. The controversial personality secured roles in New Jack City, Ricochet, Trespass and Johnny Mnemonic, all while building a flourishing television career. In Jan 2012, Ice’s directorial debut, “Something from Nothing: The Art of Rap”, premiered at the Sundance Film Festival. In Sept 2012 the he produced the documentary, Iceberg Slim: Portrait of a Pimp which premiered at the Toronto International Film Festival.

Ice-T currently stars in NBC’s Law & Order: Special Victims Unit as Detective Odafin Tutuola. Law & Order: Special Victims Unit is the longest running TV drama in television history and is currently filming its 23rd season. Ice has acted in every season of this record breaking run. From 2018-21 Ice was the Host and Executive Producer of the crime show, In Ice Cold Blood on Oxygen which aired over 40 episodes. Ice also the Host and Executive Producer The Mediator which is syndicated in the US on Fox.

As an author, he has released four books in, the first being, The Ice Opinion (1994), following that there was, Ice: A Memoir of Gangster Life and Redemption-from South Central to Hollywood (2011), Split Decision (2022) and a fictional tale entitled, Kings of Vice (2013).

As a spokesman Ice is currently featured in 4 different commercials running now for Tide, CarShield, Cheerios and GE. Both Tide and Cheerios have been #1 in their respective categories for 65+ years. Ice was also the voice of NBC’s 2022 Super Bowl and NFC promos.