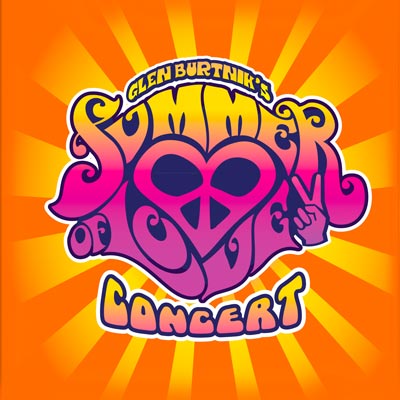 Glen Burtnik’s Summer of Love Concert focuses on classic rock plus a little bit of soul from the period of time generally between the “ official” Summer of Love, 1967, continuing through the famous Woodstock Music and Art Festival in 1969 and ending around 1973, the time of the Watkins Glen Summer Jam, the largest festival of the era! This was a time when the music made a difference! You’ll hear music from iconic artists like The Beatles, The Rolling Stones, Dylan, Creedence Clearwater Revival, Janis Joplin, Jimi Hendrix, Curtis Mayfield, The Doors, Santana, Crosby, Stills, Nash and Young, The Band, Jefferson Airplane, Marvin Gaye, The Association,  The Turtles, The Beach Boys, The Temptations, Mamas and the Papas, The Grateful Dead, Country Joe, Procol Harum, Joe Cocker, Melanie, The Spencer Davis Group, Ike & Tina Turner, The Rascals, Chicago, The Zombies, Otis Redding, Sly and The Family Stone and more! The Summer of Love Concert cast is comprised of approximately 16 performers including featured vocalists, a horn section, strings, keyboards, background vocalists and an incredible rock rhythm section who combined, faithfully re-create “absolutely live”, the songs and the psychedelically flavored spirit of the Woodstock Generation enhanced by an exciting, psychedelic lighting and video show!

The Summer of Love Concert was created by Glen Burtnik, alumnus of Styx, the original Beatlemania on Broadway (he played Paul), touring bassist/vocalist with the current version of ELO, The Orchestra, member of The Weeklings, major label (A&M) solo recording artist and hit songwriter.  “I’ve always had a playlist on my IPod named The Summer of Love. I’m actually a hippie at heart. The music of that era is probably what moves me the most,” said Burtnik in a recent interview.

“Relive the Memories, Share the Spirit and Celebrate the Songs of the Woodstock Generation, The Music That Changed the World.”