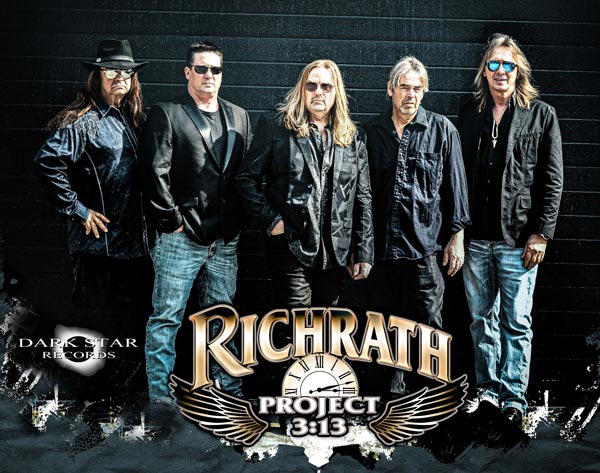 "The significance of the title is; I was in Los Angeles and it is where I was from when I first met Gary. I'm a mid-westerner just like Gary but we actually met in Los Angeles. A song that he wrote in the seventies was called "L.A. Is Mine" but he never actually finished it, I finished the song and put it out on this new 10 track album that we have now," relayed guitarist and vocalist Michael Jahnz as he discussed his relationship with REO Speedwagon’s Gary Richrath, the Richrath Project 3:13 and their recently released album.

"I have a new album that came out on August 6 and it is called "L.A. Is Mine" by the Richrath Project 3:13,” said Jahnz with great enthusiasm. “I played with Gary Richrath from REO Speedwagon for around 10 years in the late ‘80’s and the early ‘90’s and we released "Only The Strong Survive;" we put out some new Gary Richrath/Michael Jahnz material along with some REO Speedwagon stuff that we re-recorded. Then after Gary passed away in 2015 I had several demos that I put together that were going to be on future albums that were never released or heard. So, the record company came to me somewhere around 2018 to try and work on another Richrath Project with some of the unreleased stuff and we went out to Los Angeles and started re-recording some of the things with my new band which was set up the same way it was before with just a couple of different members. We've been doing this forever, even after Gary we were doing our own stuff and some of the REO stuff and we decided to put another Richrath album out that Gary and I wrote and worked on together. So, we recorded them and COVID came into existence in our lives and we had to put everything on hold in 2020. So, in the meantime we went back into the studio in the mid-west and brushed up on some of that stuff and another record company came in and offered us a deal and we took their deal and here we sit today with a brand new release worldwide."

Sometimes, fate has a way of creeping up on you, be it from either coast or the interior of our great land and then others it’s just a matter of; “Convenience?”

“I’m originally from Wisconsin, my first experience in New York and that area was The Bitter End so it was a drastic change of reality,” he laughed. “There were hecklers outside of the club and all the people on the streets and they were yelling “Come on in and see the show” and they added all kinds of interesting verbal things towards the band and I thought, oh my God; what am I doing here? It was scary (laughs) but it was a great club and a great experience; I was a young kid but it was a really great experience. We opened for Badfinger and played a 30-minute set and then they’d get everybody out of the club and then we did another set after Badfinger and it was a unique experience because the club was so small. Then I moved out to L.A. and I met Gary and I actually met him because my drummer at the time was working at a convenience store and he was checking people out at the register and sure enough Gary came up to the register and my drummer said, “Hey, you’re Gary Richrath” and Gary said, “It looks like you play in a band” and my drummer said, “Yeah; do you want to jam sometime?” He came home and said, “You are not going to believe who I ran into today” and he told me and I didn’t believe him (laughs). About a month later, Gary wound up showing up at a rehearsal studio we were in and jammed with us and that’s how it all kind of happened. We started playing together and one thing led to another and he asked me to do some demos with him and I wound up being his lead singer.”

So, for the better part and more of a decade, Jahn and Richrath collaborated and cultivated a fantastic working relationship which led to recordings, tours and until Richrath’s death in 2015; a close friendship. Jahnz, whose career was heavily affected and influenced by their partnership wanted him to be remembered and the best way to do so was through his and their music.

"What we did was, since Gary passed away and we want his legacy to live on, we kind of did some things like we did on "Only The Strong Survive." We put out three brand new songs that Gary is playing on and which he has some background vocals on. We took them off the demos and then we  had the demos playing while we were recording so that it was almost like a live thing; like Gary was right there with us while we were recording and it was a really cool technique that we tried and it worked out really well and if you listen to it, you'll hear it all. Then there are a few songs that I wrote and I had some help from my new guitarist who was doing the Gary Richrath stuff; he idolized Gary and his name is Dennis Pockets. Then we decided to put “Ridin’ The Stom Out” and “Son Of A Poor Man,” which were two of Gary’s songs from his ‘70’s stuff on there and we based the whole album around the ‘70’s sound of Gary.”

“That was the kind of concept we were shooting for; to bring back that older Gary sound and the Gary ‘70’s feel and the rocking thing that he portrayed to people and that’s really what built REO Speedwagon into being the mega-stars that they were; it was the early stuff that we kind of capitalized on. We do all of our songs real, when we are touring and playing live we do a lot of the stuff that Gary wrote from the older albums and then we throw in the new stuff.”

Jahnz, who also produced the album which can be found on Dark Star Records, earlier stated the significance of the new album’s title but; what about 3:13?

“We stayed up way too late, on too many nights and had too much fun and 3:13 hit us all the time and it was time to stop being serious and we said, OK let’s take a break and move on to the next day,” he explained; “It was usually at 3:13 in the morning and we’d watch that digital clock hit 3:13.”

One might think that given the popularity of REO Speedwagon and the depth of musicians which Richrath was associated with that his new effort may have some “Special guests” but not so says Jahnz; the players, it seems, all have longevity and are on board with the future direction of the project.

“There are no special guests; Dennis Pockets actually helped me write a song called “Heard It On The Radio” and its got a definite Gary feel to it and as I said, he idolized him growing up and he was very honored to do this thing with us and we’ve been playing with him on and off for about 10 years. The keyboard player has been with us since I played with Gary; we’ve had a couple of different drummers after the original drummer left and we have a guitar play who I’ve played on and off with also for about 10 years and we just replaced the bass player about two years ago. So, we’ve been active doing this for a while in different formats with originals and REO stuff and other cover stuff; this has been happening for about two years now, this new path we’re trying to take.”

Fortunately for Jahnz and the Richrath Project 3:13, the world has begun to re-open and they plan on taking full advantage as soon as it is possible and plausible.

“We have a video for “Help Me Save Me from Myself”  and some spot dates here and there. We have some stuff in Detroit, Ohio, some things on the East Coast, and we have scheduled some stuff on the West Coast after the first of the year; we’re just kind of putting it all together and then we have a couple of weeks off and then we start hitting it up.”

To discover more about Michael Jahnz and the Richrath Project 3:13, please visit www.Richrathrocks.com .