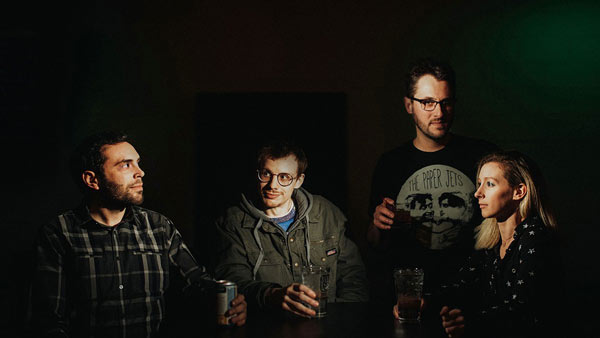 "When we made our debut we had been together for two months and we did like a five song set," says Brian Erickson of The Extensions as he and the band prepare for the release of their first six song EP, "Bellicose."

Formed not entirely from the ashes of other projects but rather an "Extension" of their individual passions; the band had a unique beginning.

"It's a band that started to form; I know that you remember the old band The Paper Jets and I know that you're familiar with the extended family members of the band and you're pretty familiar with that whole camp. The Paper Jets released a record at the end of 2018 and it became clear that it was going to be our last show or at least our last show for a long time and I really didn't want to stop playing in a band and performing live like that," explained Erickson as he offered insight on how the group came to be. "So I found a couple of other musicians whose projects were either ending or were looking to do something kind of different; maybe an extension if you would of all of our other bands and then it all kind of came together. Our very first show, we were lucky enough to get booked at The Wonder Bar in Asbury Park; so we had a nice way to set expectations right from the gate. We weren't going to be playing dives and this was a serious pursuit right from the outset. We're very lucky to know and be friendly with the people there, it was a Monday night show and we brought a little bit of crowd with us; we're happy that they gave us a shot."

Erickson says the mindset was different from past projects; most times when a band goes their separate ways the individual components begin a search for new band mates but The Extensions were formed from anticipation and their perspective is one of confident swagger not rebuilding.

"The Paper Jets release show was such a spectacle; we did it at Asbury Lanes, we had several hundred people show up, we invited former members to come back and play with us for the first time in years and if you're a band on that level, you couldn't throw a better sort of farewell for yourself," he recounted with a chuckle. "The Paper Jets were together for 10 years so it was like, let's get former members back on stage with us, let's put a great bill together and let's pack the room. So then the impetus was, I've got to use that momentum somehow; so why not use it for more music? Especially because we already had some new songs written as the new band and we didn't want to start by just showing up at open mic nights. We kind of knew because we have all come from other serious projects that we didn't need to get to the back of the line; we could kind of skip ahead a little bit. We are willing to put that pressure on ourselves and almost like demand to be taken seriously. Find me another band in the scene that is willing to do that; to just start up and say, yup, here we are and kind of treat it like a big deal,  because if we don't; who will?"

"We got to writing very quickly; I had a couple of the songs hangin' out there that didn't quite fit The Paper Jets or maybe would have had we tried for another record but as it became clear that the band wasn't going to really do much I brought some things to the new crew and we worked on what we liked and a lot of the songs weren't done and it became a process of here are some ideas that I think are OK, accept what you like and reject what you don't like and let's hit the stage. I didn't want to wait a year to debut a new project, I wanted a nice smooth process from one to the next. I kind of like that too in a way because I haven't seen that happen around the local music scene where you release an album and then just like that you say, well alright that's over, got a show with the new band in two weeks! We wanted to do it that way; people start bands and end bands all the time but I didn't want to be that person that got a new band and then a year after that another new band and so on. I said, let's all take this seriously, let's get into a studio now, let's really do this. Maybe the record suffers for it a little bit because it kind of sounds like four people in a room; we didn't really go crazy on the production of it but we got four people in a room after rehearsing the stuff for a few months and just kind of put it all down. We recorded it at Firehouse Studios in Oceanport because Matt DuBrow owns and runs the studio, is an easy going guy and I didn't want to over-complicate this, he had gotten us our second show, he was able to keep it in budget for us too which was very important."

Capitalizing on past good fortunes and reputations is not a new concept, however when your past units were moderately successful and had established fan bases creating a new persona can be difficult. Erickson says this was never an issue with these four personalities.

"I am the principle songwriter, we credit everything to the band because these songs wouldn't necessarily be what they are if they were left to my own devices or left to another band. So each member puts their unique stamp on it so everybody gets credited as co-writers but I'm usually the one who brings a full song or some idea and the band puts their own spin on it and that's how they become an Extensions songs. The reason it's The Extensions is; well I was doing a lot of work under my own name too and my buddy Jesse Elliott said, "You need something snazzy like Elvis Costello and The Attractions; what about Brian Erickson and the Extensions?" "I thought, that kind of sounds OK so I took it to the band and said; what do you think? Basically they said we can do that but if we do that we're not going to be as involved. We aren't going to make some of the concessions that you might want us to make; if you drop your name and we're just The Extensions then we are all in. I said, OK that's easy enough for me because I wasn't looking for a dictatorship I was just looking for something snappy; so if you guys want to be all in on this then let's go all in. There are a lot of bands in the scene where the band will "belong" to let's say the guitarist and the drummer and the lead guy and the bassist get paid. They're in the band but they're paid players or others own their band name and just dole out payment and the others are paid like backing players. The preference was that we all wanted to be equal members and be part of this; everybody wanted to be in a band."

So with the ground rules firmly established, material written and a wide open future; the next logical step was to get the music out to the public. A deal with a label was reached, the venue secured and with great anticipation Erickson and the band realize the value of striking while the proverbial iron is hot.

"Since we capitalized on the momentum of The Paper Jets show we were able to sort of get ourselves a deal with Mint 400 Records and again, on the strength of The Paper Jets release show last year we were able to jump back in with Asbury Lanes and do The Extensions release there on September 20. I think the way that you keep the momentum going is to capitalize on showings of good faith; where a place or a band or people do right by you and you say, well you did right by me and we packed the house; so how about we come in and do it again? It would've been less pressure on us to do it at a different venue but sometimes I like that little bit of pressure; especially to say, this is the band's first record so let's put that pressure on ourselves, let's prove that we can do it because if we can do it there we can take that and say, hey we did this here, let's take it to your room now too. Hopefully the music is enjoyable enough where people will like it and want to listen to it and go stream it online or God forbid drop five bucks for a CD (laughs)."

"Bellicose" is only the tip of the iceberg and Erickson says that it's a good indicator of what the band is made of; a harbinger of what's to come.

"The EP is six songs and they have a specific sound and feel about them. Some of the stuff we've started to put together after these have a different feel or tone, they've taken on a little bit of a different life so we decided to save that for a full length record because we have more stuff than we've recorded. This EP is nice and breezy and kind of establishes what we are all about."

To discover more about The Extensions please visit https://www.facebook.com/theextensionsband/